Nihon Falcom’s Ys (pronounced “eese”) been around since the days of the PC-8800, but only now are we seeing this formative tale in the enormously popular saga. Well, technically, a lot of people already saw it in 2006 when it originally released, or 2012 when it was initially localised. Thankfully, now it’s on the Switch we can see that it has held up brilliantly, and is well worth playing whether it’s for the first time or one of many encore playthroughs.

The momentum of Ys Origin is quite something. An action-RPG with the “action” part very much writ large; we found it more akin to the likes of Gauntlet than, say, the Zelda series. No doubt that statement will have many series fans gnashing their teeth at this writer’s ignorance, and for that, we can only apologise; not being what you’d call a committed fan of the long-running Ys series, you might wonder if a useful position can actually be offered. Here’s the thing, though – regardless of your attachment to its host franchise, Ys Origin is excellent fun. 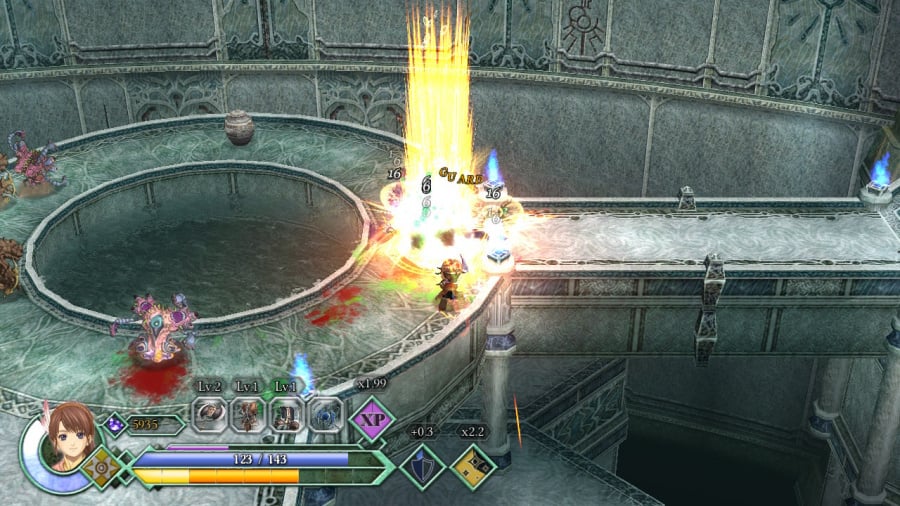 It’s that momentum that makes it work – the meat and potatoes gameplay of it all is very familiar stuff – run, jump, attack, magic attack. It never gets much more complex, but it doesn’t need to; the escalating design introducing stronger enemies and environmental hazards always keeps you on your toes, and considering it’s a game in which you spend much of your time fighting enemies, said fighting never stops being a total blast.

At the start, you’ll pick a character – either hack n’ slash Yunica or ranged attacker Hugo – then set out into a fairly linear ascension of the massive Darm Tower, each floor of which effectively encapsulates a “dungeon”, through which you’ll have to crawl. Said dungeons are surprisingly breezy to navigate, thanks to your characters’ ease of control and speedy movement – bashing your way through rooms is so effortless in terms of basic navigation that you’ll never feel like Ys Origin is a slog, even when the difficulty spikes upwards.

The challenge is a robust one, but very fair and easy to mitigate when you hit a wall. In Ys Origin, levelling up is extremely potent in terms of immediately noticeable effects on your damage output – a boss that’s a near-impossible war of attrition on the first encounter can become a much more agreeable challenge simply by going back and grinding a couple of levels. 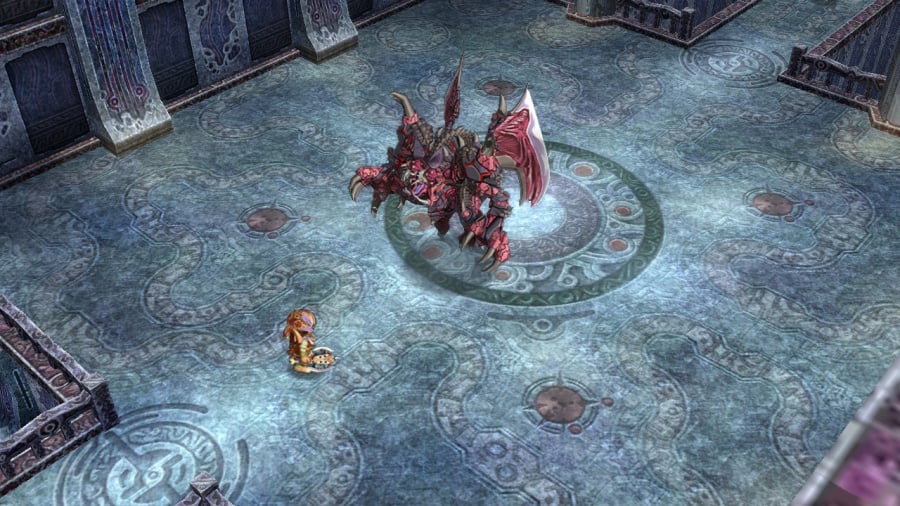 Now, you may not want to hear the word “grinding” applied to pretty much any game, but the process of beating up monsters here is so enjoyably crunchy that it’s actually a pleasure to have an excuse to spend more time doing it. The sensation of repeated impacts is satisfying stuff and executing your special attack to melt through a crowd of grunts is a joy.

Destroying enemies results in a shower of glimmering items, from SP (spendable on permanent upgrades at save points) to health regains to temporary buffs; it triggers a mini version of that tingly Diablo effect watching items fly out of the enemy you’ve skilfully dispatched. You level up pretty quickly, too, so it’s great fun to combine the necessary murdering with a quick sweep of the dungeon for hidden treasure chests.

This ease of progress (in terms of accessibility, not game difficulty) leads to an action RPG that feels downright friendly, which to this reviewer is a bit of a departure from what can be a somewhat alienating genre. Among its contemporaries, including others in the Ys series, Origin is incredibly easy to get to grips with. It’s also not the longest game to see the end of – we took around 7 hours with Yunica – but there’s always the other character’s version of the game to play through. Granted, outside of the story and a few remixed elements, it’s not terribly different, but the option is there if you want to spend more time in Darm Tower. Getting around to dig up more and more secret items as you discover the means to access them is achieved by using the save points to simply warp from floor to floor – another brilliantly useful touch. 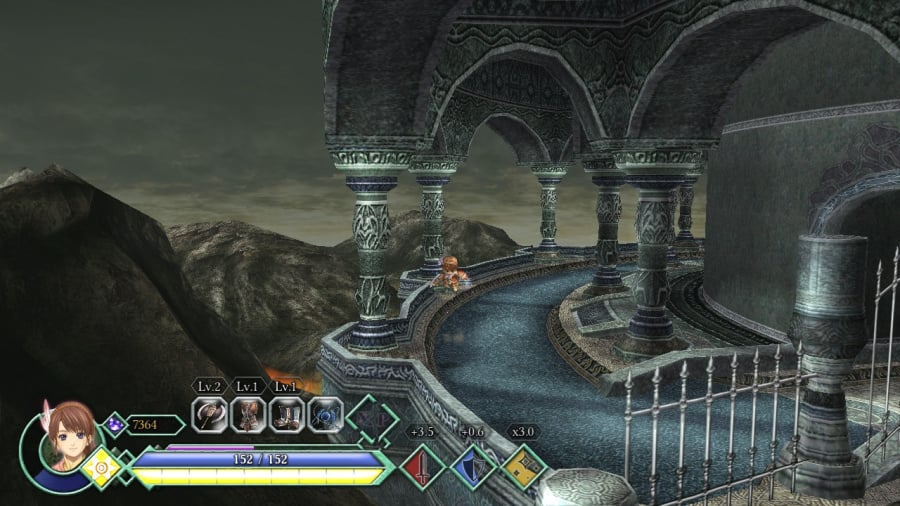 In terms of presentation, Ys Origin all looks lovely, if a little bit dated – the 3D environments are never impressive, aiming for function over form, which means you’ve got clean, clear areas to navigate mixed with attractive (if a little blurry) sprites for the characters and monsters. Running at locked 60fps, it’s never anything less than flawless in performance. The music, too, is excellent – familiar Ys motifs mix with a catchy, upbeat soundtrack that perfectly suits the fast-paced and exhilarating gameplay.

The story here takes a back seat to the brilliant and compulsive dungeon crawling gameplay, which should appeal even to those who don’t tend to enjoy action RPGs. No puzzle, no battle and no single room ever outstays its welcome in Ys Origin, resulting in one of the briskest, easy-going games we’ve played in a long time. Sure, the visuals could be better, the overall length might be too short for hardcore RPG fans and there’s a lot of grinding afoot, but this remains a solid choice if you’re a fan of this sort of thing. An easy recommendation to pretty much anyone who has an interest in RPGs, Ys Origin is perfect even if you’ve never touched a game in the series before. Now, can we get Ys: The Oath in Felghana on Switch, too?

Watch Dogs: Legion Review: The Reasons To Skip It Are Legion

Random: Wow, The PS5 Really Does Dwarf The Switch

Sega’s Sonic Double Packs Are Out Now On Nintendo Switch


Pokémon Sword And Shield’s The Crown Tundra DLC Launches Next Month, All Past Legendaries Appear