Now you’re talking. Indie games have been imitating classics of the past for years and years now, and it’s about time that one of them had the cajones to take a run at the seminal ActRaiser, Quintet’s 1990 genre-melding masterpiece. To be fair, SolSeraph had a crack at combining top-down elements with platforming, although the results were rather disappointing. Fortunately, Smelter – rather fittingly – melds together real-time strategy with action-packed side-scrolling, and it does so with quite some skill.

Taking control of both Smelter and Eve – yes, that Eve of “Adam and” fame, apparently – you’ll hop and bop around with platforming mechanics that recall titles such as Mega Man X without ever slavishly imitating them. You gain new powers as you go along, which introduce quirks like wall-jumps, dashing, blocking, parrying, grabbing (akin to the athletic Ristar) amongst many others. The drip-feed of these new powers is linear, but the game never keeps you waiting too long for the next Cool Thing, and the new abilities can be taken into beaten stages in order to access new areas for secrets and Trials. 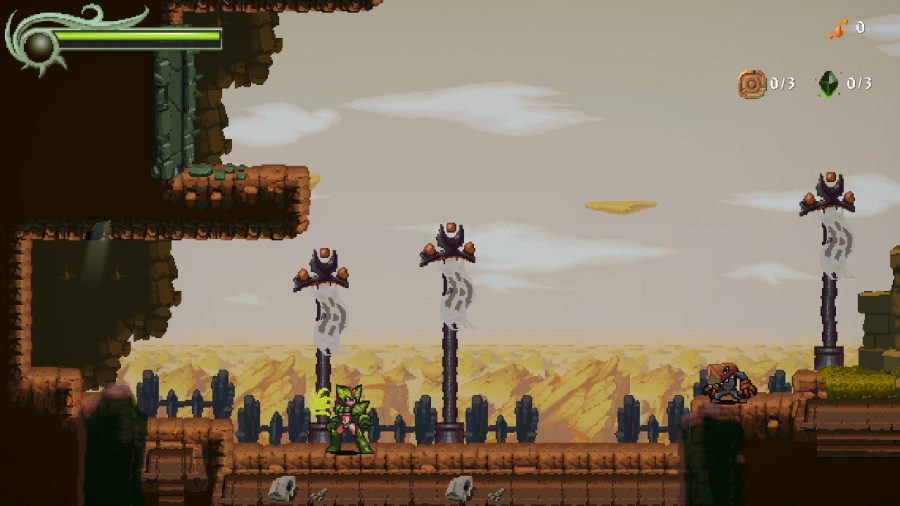 What are Trials? Fabulous question! Much like the recent Kaze and the Wild Masks, the entrances to shorter challenge areas are hidden throughout the action stages, each thrusting you into a tricky time attack segment with specific rules to adhere to – i.e. avoid taking a single hit. You’re able to retry as often as you like (as per the main game), so while challenging, they tend not to be too frustrating. They’re all timed, as well, meaning you can come back to try and beat your times and get some practice in with your new abilities as you gain them.

Trials aside, the stages are tough but fair, and ooze with strong design – new powers are introduced in fairly organic ways and are easy to get to grips with. It’s not perfect, though, with a handful of brief sections that seem a tad under (or possibly over) tested. One segment in the early game sees you evading a giant worm akin as it pursues you downwards, and dropping down to lower levels through relatively narrow gaps is a little bit fiddly when the Mega Man X-style wall-climbing frequently adheres you to walls even when you don’t want to be.

With checkpointing that occasionally feels a smidgen less generous that it ought to be, that can lead to a little frustration. Don’t get us wrong, it’s mostly great stuff. Combat is crunchy and satisfying (utilising both melee and ranged attacks) and your gradually expanding repertoire of moves keeps things fresh. Level design is mostly very good indeed, with stages that last just the right amount of time; nice and meaty without outstaying their welcome. 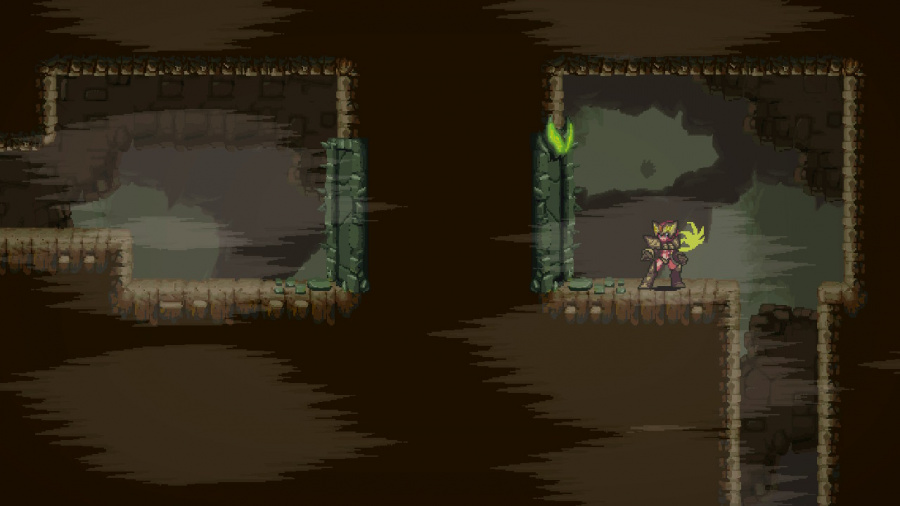 The strategy side of the game works well, too – like ActRaiser, it’s not super demanding, but it is a fun change of pace ordering your minions to seize control of the land as Smelter, flapping around shooting fireballs at enemies with a twin-stick control scheme. You’ll build houses and barracks for your troops, but you’ll need to keep them fed with apples or they won’t help you. It’s not complicated, but it’s an enjoyable challenge and the presentation is superb.

In fact, it’s worth talking about said presentation, because it’s pretty stellar. The game view is zoomed out enough to give you plenty of room to see what you’re doing and plan your movements, and the visuals are clean and colourful. The strategy/overworld segments, in our view, look a little better than the platforming, but it’s all remarkably consistent and well-drawn. The story is fun, too, and told with breezy dialogue that doesn’t take itself seriously and refuses to bog down the adventure with reams of words. If anything it may be a little too loosey-goosey, but the real draw here is the gameplay and we’re delighted to say that Smelter delivers on that front.

One of those rare titles that takes inspiration from the classics but manages to forge its own identity, Smelter is a breath of fresh air that uses its influences very wisely, assisted to excellence by generally pretty terrific level design with only a handful of lesser segments bringing things down just a tad. The proceedings feel confident, original and polished, with gorgeous graphics and an outstanding soundtrack that calls to mind the likes of Mega Man X4 for its action stages and evokes Yuzo Koshiro’s majestic ActRaiser score for its side-scrolling levels.

My Singing Monsters Playground Launches This November, And Switch Is Getting A Physical Version