Any conversation about the greatest cartoon TV shows must inevitably make reference to Samurai Jack, the early 2000’s samurai epic from Genndy Tartakovsky. Featuring Tartakovsky’s signature angular animation style and a surprisingly mature narrative, the show easily captured the hearts of millions in its original run. Then, after a hiatus of over ten years, Jack’s story was brought to a definitive close in 2017 with the airing of the fifth and final season. After that ending, it seemed pretty concrete that Samurai Jack was done and dusted, but then someone at Adult Swim Games decided a video game should be made based on the IP.

Tie in games like Samurai Jack: Battle Through Time have arguably become rarer in the modern era of gaming, as gamers grew wise to the cheap cash grabs that are made with minimal effort. Fortunately, Samurai Jack: Battle Through Time is not one of them; this was a game made with intention. Adult Swim Games brought in Soleil—a dev team comprised of some key ex-Team Ninja staff—for the development duties, Genndy Tartakovsky for the writing, and almost all of the original cast for voice acting duties. The end result is something that feels a bit like a ‘lost episode’ of the TV show, while also nailing all the right elements to make for an enjoyable game in its own right. 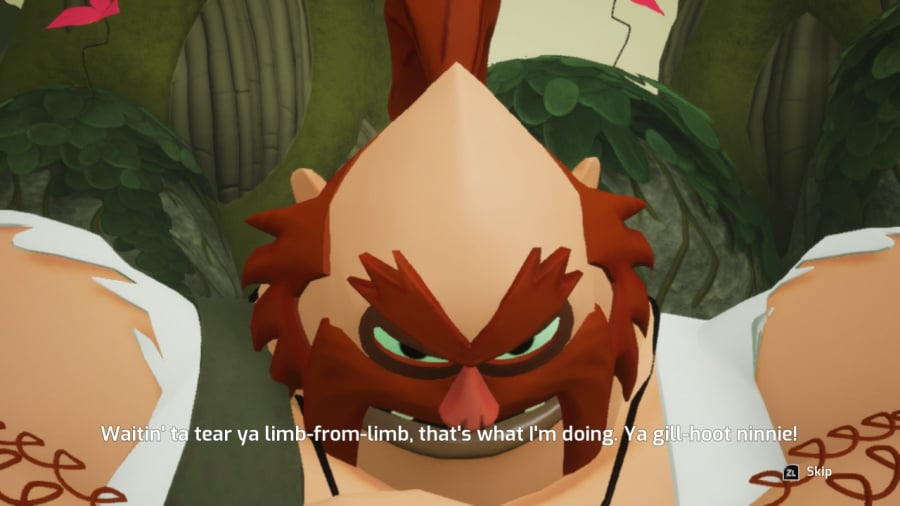 Without spoiling too much, the narrative takes place as something of a ‘side story’ set in the final season. While Jack and Ashi are time travelling, Aku meddles with the tunnel they’re in and separates the two, trapping Jack in a sort of limbo that is neither in the future nor the past. Conveniently, this also gives a canon explanation for how Jack stumbles upon characters and locations from across the entire show’s run, which gives the whole game a sort of nostalgic ‘greatest hits’ vibe.

Indeed, a key thing to bear in mind here is that the story holds a lot more meaning for those of you who are fans of the show. It’s easy enough to follow the beats of the conflict as Jack fights to escape from the time limbo he’s been cast into, but there’s far more emotional resonance when you recognize various characters and places and understand their relationship with Jack. Hearing all of the original voice cast return (with the exception of the late Mako) also goes a long way towards giving this narrative a sense of legitimacy as well, but again, the full effect will be lost on those who don’t have a background with the show. That said, the story is satisfying whether you’re a newcomer or a series veteran; it properly respects the material of all that came before without being too difficult for anybody unfamiliar with the ongoing lore to parse. 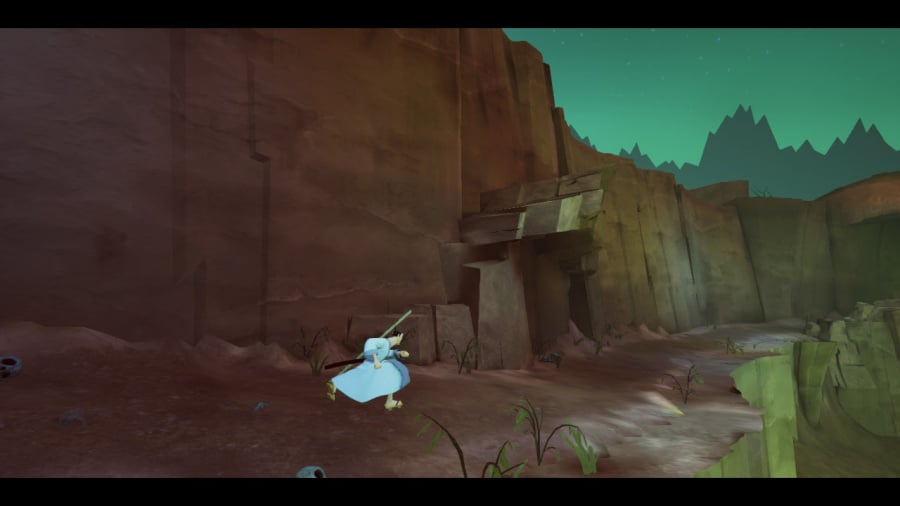 Gameplay takes the shape of a standard Devil May Cry-style slash ‘em up, wherein you trek through linear levels packed with arena-style brawls that are strung together with some light exploration and platforming sections. Each stage is only about twenty-to-thirty minutes long, and introduces various new stage gimmicks and enemy types to keep you on your toes. Overcoming enemy encounters and sniffing out secrets in platforming sections then lead to you getting various boons to help with future obstacles, such as points to invest in a skill tree, new weapons to use in combat, and gold which can later be spent at a shop for consumables and weapon upgrades.

Combat is where the gameplay really shines, and luckily this is also where the ex-Team Ninja staffers’ prowess really shines. Jack always has his trusty magic sword, but he has a whole litany of other weapons picked up along the way, like a morning star, bamboo pole, bow, or a handgun. Depending on the type and number of enemies you’re facing, different weapons are more useful than others, and part of the joy of combat is in figuring out how to string together combos with each weapon and swap them out on-the-fly as you slice and dice your way through Beetle Drones and Imakandi.

Jack’s controls are delightfully tight and responsive and make every quick decision and crushing mistake feel earned. The variety offered by the tools at your disposal and enemies you face ensure that combat rarely slips into a place of stagnation. Some enemies and boss encounters can occasionally feel a little too spongy for their own good, but the majority of the experience is spent flexing your lightning fast reflexes as Jack is assailed on all sides by enemies of all kinds. It never quite reaches Ninja Gaiden levels of punishing difficulty, but this is far from a game that you can just sleep through and hope to succeed in; Samurai Jack: Battle Through Time demands that you pay attention and keep your guard up. 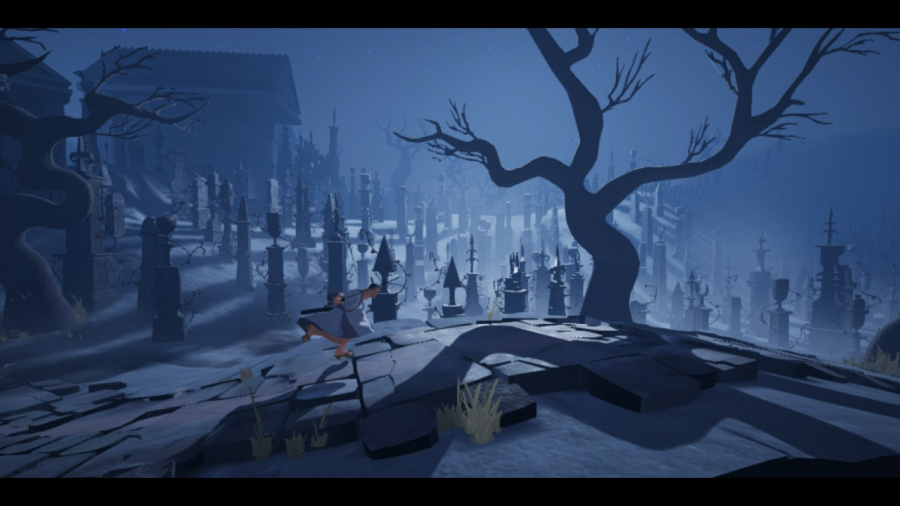 When you’re not busy fighting off Aku’s forces, Jack’s abilities can be bolstered by a three-pronged, rather predictable skill tree that offers various buffs to his combat performance. These can unlock new combos for different weapon types or expand various stat parameters, like health or carry capacity, and each skill node feels meaningful without affecting the overall gameplay too greatly. By the end of your quest, Jack certainly feels like an unstoppable killing machine, but the steps you take to get there are paced out well and make that journey worthwhile.

So far, so similar, and indeed, that’s perhaps the most substantial complaint that can be raised against Samurai Jack: Battle Through Time. It has excellent, varied combat, semi-open level designs, and a non-linear form of character progression, but it doesn’t do anything new with these things. If you’ve played Bayonetta, Devil May Cry, Ninja Gaiden, or any other such game, then you have seen pretty much everything that Samurai Jack: Battle Through Time has to offer. Still, this release is also a shining example of how innovation doesn’t necessarily have to be present for excellence to show through. It may well be that Samurai Jack: Battle Through Time doesn’t bring much new to the table, but it consistently demonstrates a mastery of all the basic ingredients necessary for an enjoyable action game. 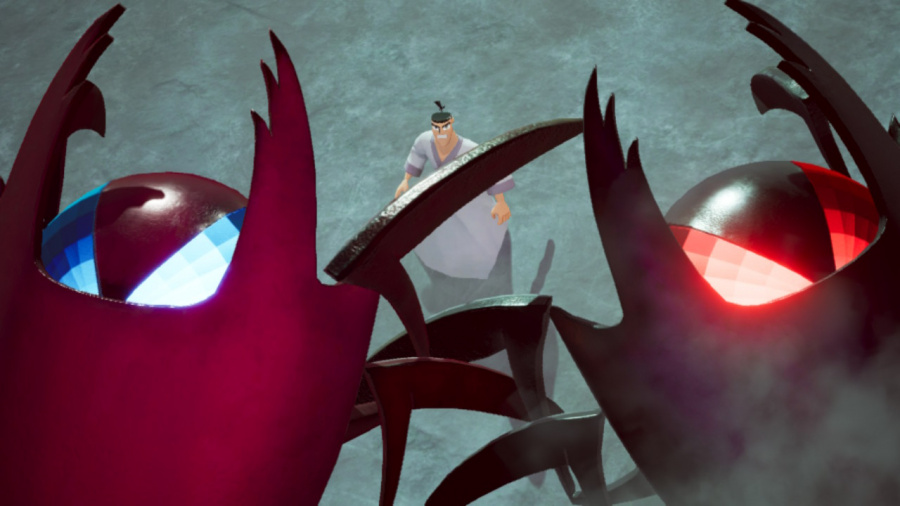 On the presentation side of things, Samurai Jack: Battle Through Time utilizes a 3D art style that translates Genndy Tartakovsky’s signature look quite well. It’s clear that the developers put a lot of time into capturing the unique atmosphere of these environments, and little details like how Jack breaks falls when he gets thrown by an enemy showcase the quality of the animation. It’s a shame, then, that performance doesn’t always hold up as well as one would hope. Though performance is a little less choppy in handheld than in docked mode, we counted plenty of times where a particularly intense battle led to the game haemorrhaging frames and falling short of its target 30 FPS. These performance issues never substantially affected the gameplay and can almost be ignored, but we noticed quite a few times where dropped frames took away from the experience.

It may feel like it’s a few years too late, but Samurai Jack: Battle Through Time is a worthwhile experience that properly celebrates a beloved IP while being a darned good action game in its own right. A striking art style, well-executed combat mechanics, and a challenging level of difficulty make this one an easy recommendation, but with the caveat that it’s a little light on original ideas and that performance can often dip to sub-par levels. It may not be perfect, but Samurai Jack: Battle Through Time acts as a great companion piece to the legendary cartoon; don’t dismiss this as just another tie-in.

Diesel On Fadelite Review: The Smartwatch Your Heart Desires