There are so many racing games out there nowadays that it takes something really out of the ordinary to stand out. Inertial Drift absolutely ticks this box, and while it isn’t an overwhelming success in every regard, its unique control system could result in a cult following nevertheless.

Its main hook, as the name suggests, is its focus on drifting. What’s particularly notable, though, is the way this drifting is performed; this isn’t your typical racing game where the left stick is for steering and drifting is usually achieved by tapping the brakes or handbrake as you turn. Indeed, this isn’t a game where steering with the left stick will get you very far at all – doing so only turns your car a slight amount, meaning you’ll smash into the wall on all but the mildest turns.

Instead, Inertial Drift also makes use of the right stick, which it calls the Drift Stick. By moving it left or right you’ll slide the car in that direction, and by combining it with the left stick you can change the angle and intensity of the slide to approach each turn in the best way you see fit. At least, that’s the theory: the reality is that reaching that point may take you a few hours of practice. 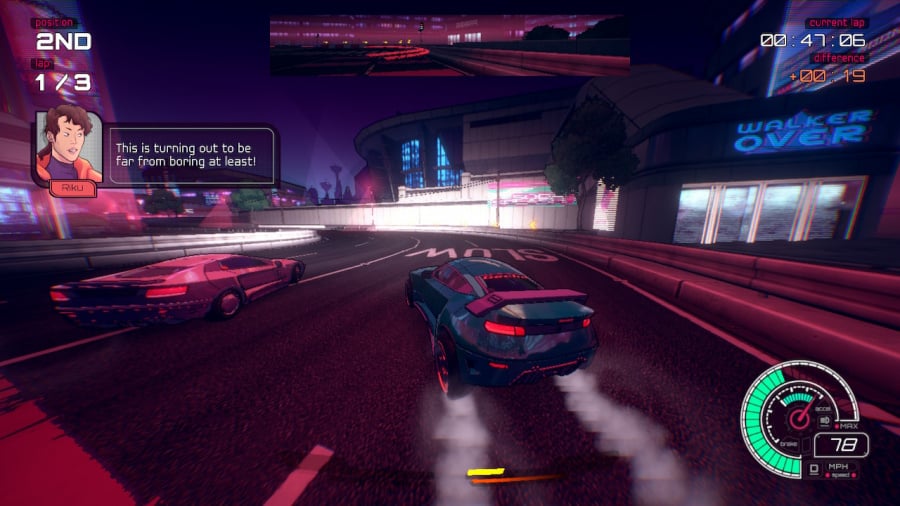 When it all finally clicks together, though, the results can be very satisfying. We can’t remember the last time we felt great about ourselves simply because we managed to pull off a hairpin turn in a racing game; something that wouldn’t require much more than careful timing with the brake in other racing titles, but here, it requires skilful use of the left stick, right stick, brake and accelerator (often all at the same time). That said, if you’re expecting a pick-up-and-play arcade-style racing game you may really struggle with Inertial Drift because it requires you to take time to get to know your car instead.

This ‘me and my car’ vibe extends to the game modes themselves because none of them offer any situation where there are more than two cars on the track. The focus is very much on mastering the controls and learning to perfect your drifts through each turn, rather than any sort of Grand Prix-style scenario where you’re scored on your finishing position, like you’d get in many other racing games.

Three of the six race types in the game are essentially the same. Time Trial challenges you to beat a certain lap time, Ghost Battle does the same but with a ghost car on the track, and Race does the same again with a physical car on the track. It should be noted that despite its obvious difference, Race plays just like Ghost Battle because there’s no collision detection whatsoever: you just pass through the rival car. The game explains it away with some hokey intro about how every car has a ‘Phase Shift Impact Prevention’ system fitted, but it did have us stroking our chins regardless. 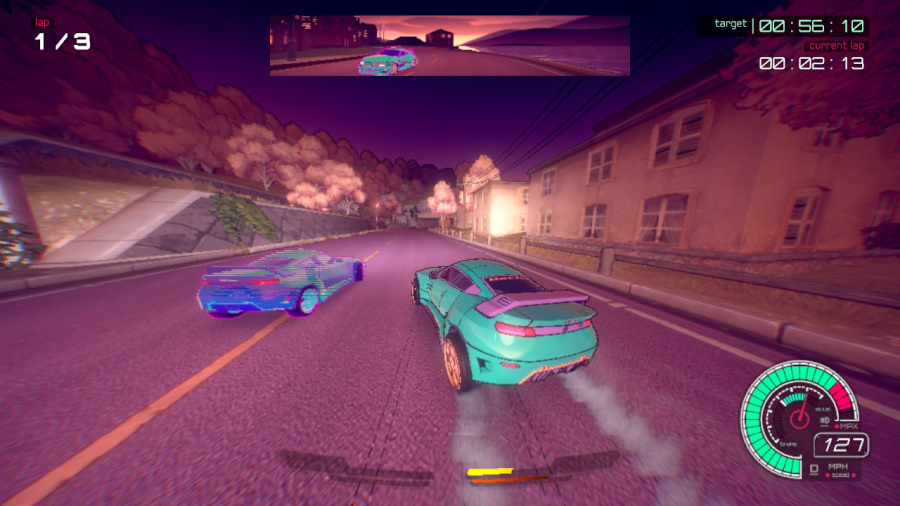 The other three race types mix things up a little more, but they all still fit under the same general umbrella of mastering your car’s handling. Duel is another one-on-one race (again, with no collision detection) where you get points for pulling ahead of your opponent and have to reach 1000 points before them. Endurance is one of those checkpoint-based affairs where you have to get as far as you can before the timer runs out, hitting checkpoints to top it up. Finally, Style scores you based on how well you drift and is really the only one that isn’t a variation of all the others.

These six race types are presented in a few different ways throughout the game modes available. The Story mode is a disappointingly short campaign consisting of five tracks, each with three races (of types taken from the list above). In between each, you get some story sections where a bunch of ultimately forgettable characters discuss racing while preparing for a Summer Grand Prix. Each of the four characters has their own story, but the dialogue is similarly dull in each; lots of chat about drifting, using each other’s ghosts to practice and the like. Not even an unlockable ‘Xtra Crispy’ difficulty level made us want to go through it again once the credits rolled after a couple of hours. 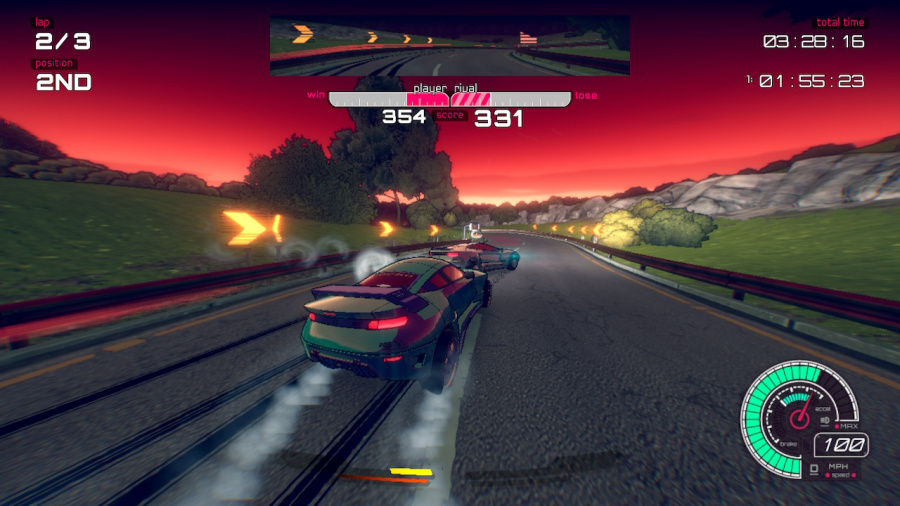 The only other single-player modes are Challenge (which consists of 12 different one-off races that unlock you new cars), Arcade (which is actually just a quick race option) and Grand Prix, which isn’t what it sounds like and is just five more challenges joined together, giving you three lives to beat them. Add to that the option to play split-screen multiplayer – with two people, of course – and an online multiplayer mode that’s dead on arrival like so many third-party games, and that’s about all there is to offer. We appreciate that on paper six modes sounds like a healthy selection, but each is so light on longevity that the sum of the parts isn’t enormous.

Performance, meanwhile, is simply okay. The visuals call to mind classic ’90s racers and there’s a lovely neon vibe throughout; we especially like the way rival cars glow with light when they’re drifting, which not only looks cool but gives you a visual clue of when is the best time to initiate your own drift. It runs at 30 frames per second for the most part (a step down from how it runs on other systems), but distant objects are rendered in relatively low detail until they get closer. This can mean that some corners can take you by surprise because even when they’re marked with arrows, these arrows aren’t really legible until you’re too close to be able to react and adapt to the turn (especially given that the drift system means you often have to start preparing for a turn much earlier than in other games). The lack of any on-screen map means you’re essentially taking some of these turns blind until you learn the track inside-out. 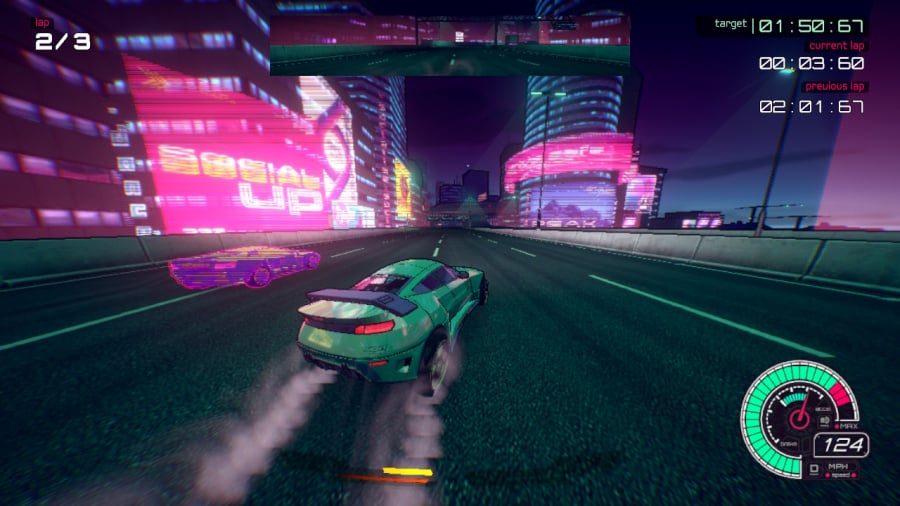 To be fair, though, that’s kind of the point of Inertial Drift. It feels like it’s been designed to have you hopelessly bumping and spinning all over the shop until you finally master the controls and learn the nuances of every track, only for you to choose a different car, realise they all handle completely differently and start bumping and spinning all over again until you master that one. It’s a gameplay loop that’s not going to be to everyone’s tastes, but if you stick with it, it can be incredibly gratifying.

If the title conjures up the ideas of big, bombastic arcade games like Ridge Racer and has you picturing your car effortlessly whipping around corners while making your way through the pack to try and reach first place, be aware that Inertial Drift offers the completely opposite vibe. This is a game that demands patience, concentration and a time commitment to learn its unique control method. Whether that’s something you’re willing to put into it should determine how much you’ll get out of it, but when it clicks, it offers some of the most exhilarating racing action on Switch, and bodes well for a fleshed-out sequel.

Inertial Drift is an acquired taste. Its interesting control method eventually pays off and feels rewarding when you simply complete a course unscathed, but none of its modes are meaty enough to provide an solid package overall. If you’re the type who has no issue with racing over and over again to perfect your skills, this could be a game for you. Fans of more conventional racers, however, may want to drift around it.


Latest iPad 12.9 Back Down to Lowest-ever Price at Amazon