Palindrome Interactive has hit upon a number of pretty clever ideas with Immortal Realms: Vampire Wars. This pleasingly hammy/gothic foray into the world of turn-based strategy streamlines and simplifies a lot of the busywork of similar titles and adds a nifty card game mechanic that enlivens proceedings as you maraud around its map and take part in its battles. It’s got an undeniably attractive setting, too; vampires are never less than awesome, and the idea of stalking the haunted countryside draining blood out of townsfolk and villagers to use as our very own undead currency is an attractive one in this, the year of our Lord 2020. However, what’s good here is, unfortunately, let down by a lack real depth, some ropey AI, a clunky user interface, bugs and stutters and not nearly enough content for the premium asking price.

In Immortal Realms: Vampire Wars you’ll set out as one of three sexy vampire factions – the Dracul, Nosfernus or Moroia – and attempt to claim territories across one of four suitably atmospheric maps. Each of the three clans have different skills, abilities and units available to them, although these all fall under the same basic types – ranged, warrior, tank and assassin – all of which are headed up by a powerful vampire Lord who leads them into battle wielding a set of magical cards with which to deal all manner of damage and twist the enemy into knots. It’s this card element of the game that’s the unique selling point here, and it’s one that adds a pleasing amount of variety – not just in the heat of turn-based battle, but also as you traipse around the world map taking over settlements and strengthening your grip on the land. 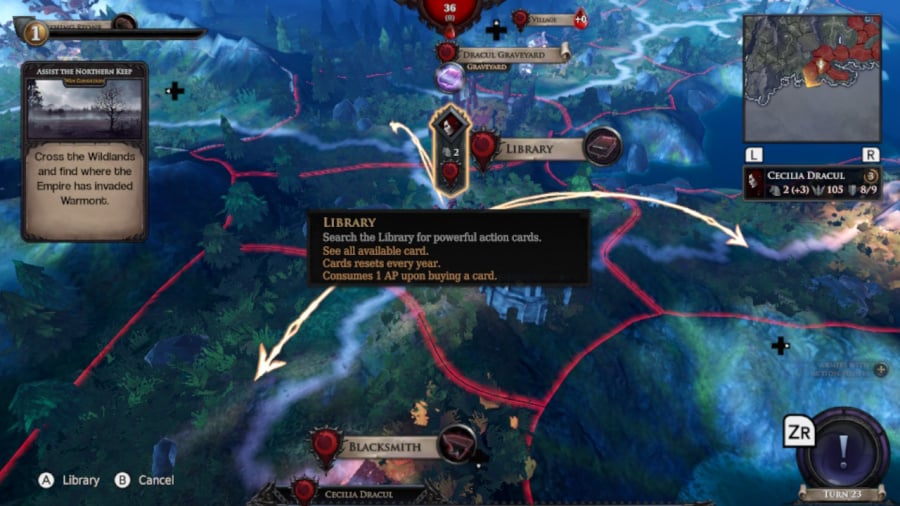 On booting up a new campaign and choosing a faction you’ll be dealt pre-determined clan cards to get your deck started. You’ll then choose a further three from a set of five and take these cards onto the map to commence the sucking of blood and besting of immortal foes. Cards here can do any number of things by simply selecting one at any time and hovering it over a target. You can ambush a nearby enemy force, inflicting 30 percent damage to their health bars before a battle has even commenced, bestow extra AP on your forces, summon zombies and gargoyles, get discounts on new troops, increase city and town populations – giving you more blood to quaff – and so on. There’s an impressive number of cards with plenty of fun powers here, and they’re also pleasingly well animated to boot.

Upon moving into combat proper, swooping down onto a Total War-esque battlefield, each Vampire Lord has their own set of war cards that can curse enemy units, poison areas of the map, restore life to comrades, cause rot and decay and more. These cards are upgraded every time you win a battle or gain enough XP to move up a level and by the time your neck-loving Lord has risen up the ranks, you’ll have a deck capable of causing serious problems and turning the tide of a closely-fought fight. Cards really do add a lot of spice to proceedings and, alongside the streamlined nature of the game’s various other elements, give the game a surprisingly free-flowing and zippy vibe that’s not often associated with the genre. 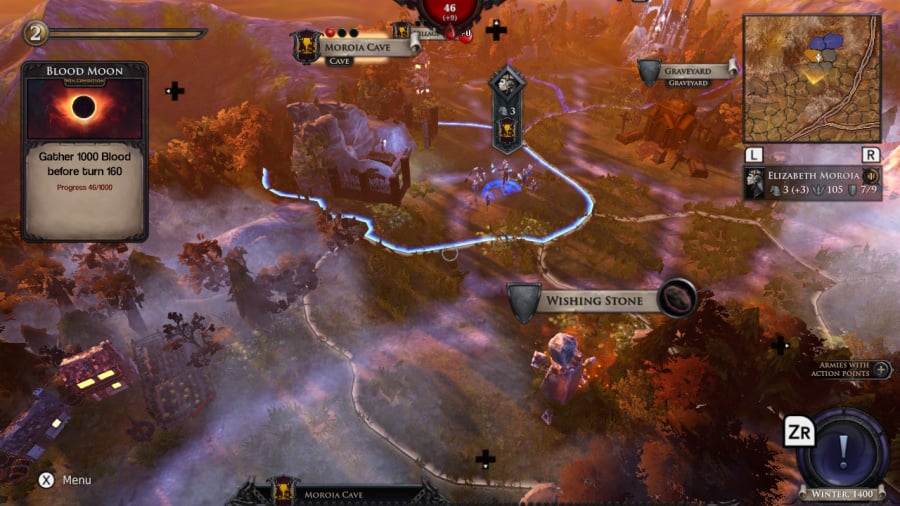 Alongside the various boons and traits bestowed by your constantly evolving deck of cards, you’ll also gain legacy points every time you claim an area of the map which you’ll use to unlock traits on a legacy tree – stuff like more elite troops, a stronger lord, more blood from villagers and better defences for weak units such as archers. In short, there are plenty of moving parts at work here and it’s all impressively easy to get your head around; in fact, we’d say this is a reasonably good game for beginners to the genre as it does away with all the complications of your Total Wars and simply tasks you with bombing around the map, sucking blood and getting into bloody big fights.

There’s no great fuss or anguish about troop upkeep costs, debt, citizen happiness or boring diplomacy here. Vampires just don’t get down like that; they keep it simple, mate, it’s how they live so long. The only thing you ever need to really consider with anything approaching care is your blood points. The blood you leech from citizens becomes BP which you’ll use to recruit more units, upgrade buildings (in a very limited number of ways), use libraries, blacksmiths and so on – all of which only actually serve to grant you more cards. It’s extremely straightforward stuff and we love the idea of stalking around maps sucking what we need from innocent victims, turning the lords of resplendent Gothic manors into immortal vampire warmongers and doing battle with armies of vicious undead foes. 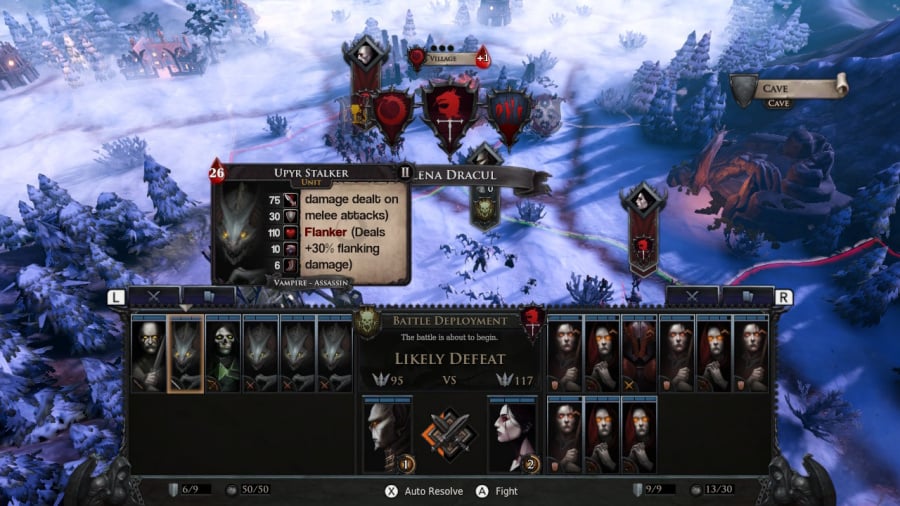 Unfortunately, as good as all of this stuff is and as easy as Immortal Realms: Vampire Wars can be to have a pretty good time with, it’s all held back by a handful of annoyances that are hard to ignore. The AI can be painful at times; we’ve often started a campaign within arm’s reach of an enemy and made a beeline for them before they can muster strength, only to find they’ve somehow amassed a great army that proceeds to decimate our glorious undead force. Game over. You’ll also often find yourself scraping through a tough fight only to be immediately pounced on by another army before you’ve had time to recover at all. Battle maps, too – although they bear a passing resemblance to Total War and the like – are actually really small and quite badly designed. You’ll most often find yourself funnelled into narrow corridors with your units unable to bypass each other, queued up and waiting for a space to get at the enemy. It’s very frustrating and not least because it could have so easily been avoided by simply making the maps bigger.

There are other problems too. The UI is finicky; you need to click on individual units to bring up information – there’s no handy pop-up information boxes as you scroll over units or areas here – and the tutorial does a bad job of explaining how the little intricacies work so you’ll spend the first hour scratching your head as to how exactly you’re supposed to turn the sole inhabitant of a nearby country estate into a Nosfernus Lord of chaos.

On Switch the graphics, which aren’t exactly state of the art on other platforms, have also taken a pretty big hit, often looking decidedly last-gen in the handful of cutscenes you’ll be treated to. We also experienced a handful of instances where we were dead – cut down by a bewilderingly large enemy army at a very early stage in the game – but the game itself didn’t seem to notice so it played on and kept dealing us cards and talking to us as if we weren’t currently six feet under. There’s also some noticeable stuttering in places on the world map from time to time and, if we’re being really picky, the zoom function doesn’t allow you to get close enough to the action to allow a good look at your unit types, enemies and the like. 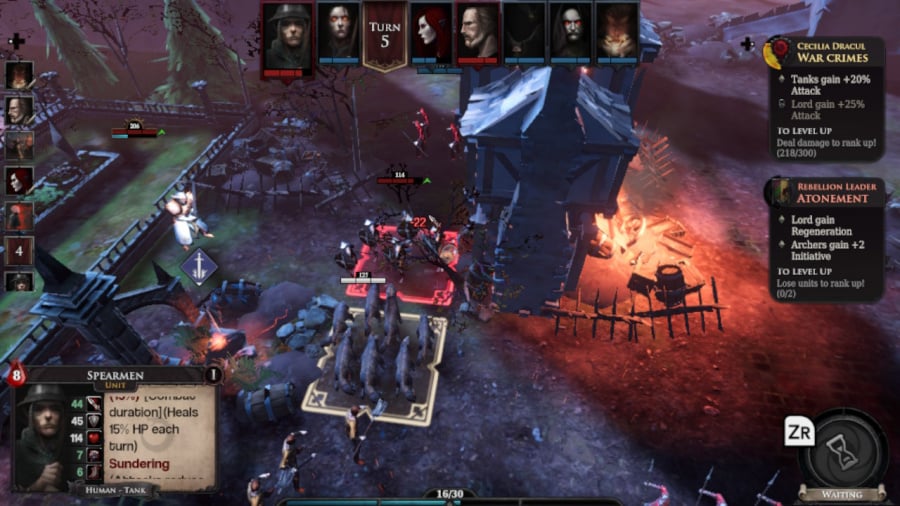 With a campaign, skirmish mode and a sandbox that allows you to choose your side, map and victory condition before letting you tweak various other settings, there should be enough going on here to keep players going for ages. However, the streamlined nature of gameplay means that, although there’s certainly fun to be had and everything is very easy to understand, it does get decidedly repetitive after a rather short while.

There’s just a real lack of depth here in the long term and, without all the busywork for which the genre is known, you’re only really left with moving around a map and getting into fights. Matches, therefore, tend to play out much the same every go-around, regardless of who you choose to run as or how you make your way around the world and, in the end, Immortal Realms: Vampire Wars ends up feeling like a game that’s full of good ideas but doesn’t fully manage to deliver on them this time around.

We’d honestly love to see Palindrome Interactive have another crack at this in the future as the hammy setting, blood currency system and card elements are all fantastic ideas, but they’re attached to a rather clunky game right now that’s lacking in truly addictive or deep strategy. Fans of the genre may certainly get some fun from what’s here and it’s definitely very newcomer-friendly, but that lack of polish and depth just holds this one back from immortality for now.

Immortal Realms: Vampire Wars is a reasonably fun turn-based strategy affair with an excellent setting and some unique ideas of its own. The streamlined nature of its gameplay makes it pleasingly zippy stuff that’s well-suited to strategy newcomers but a lack of real depth, a clunky UI and some dodgy enemy AI means the fun here is, unfortunately, pretty short-lived overall for anyone but genre enthusiasts and vampire fans.

Diesel On Fadelite Review: The Smartwatch Your Heart Desires


Save $975 on This Monstrous Alienware Gaming Laptop Today