Milky Tea’s HyperBrawl Tournament sees teams of futuristic handbrawlers compete in chaotic 2v2 matches where they duke it out — literally kicking, punching, stabbing and hammering each other into submission — in order to stick a great big metal ball into each other’s neon nets for a GOOOOOOOAL! It’s Speedball blitzed with Rocket League, a cartoonish arcade sports effort whose quick, action-packed matches feel like a perfect fit for Switch and, while it may not quite reach the dizzy heights of its most obvious influences due to a couple of niggles here and there, it’s a fun and frantic good time nonetheless.

The story here, such as it is, sees future heroes from across the galaxy sought out by ancient protectors of the universe in order to prove themselves in the ultimate tournament, outscoring, outwitting and out-brawling each other in order to become masters of the Hyperforce. Rightio! Choosing from a roster comprised of eight brawlers divided into three classes — core, swift and tank — you’ll need to team up and get to grips with punching, kicking, hypercurving your shots, activating a hyperforce special to power up attacks and making use of a variety of weapons and tools in order to subvert the flow of a match in your favour. 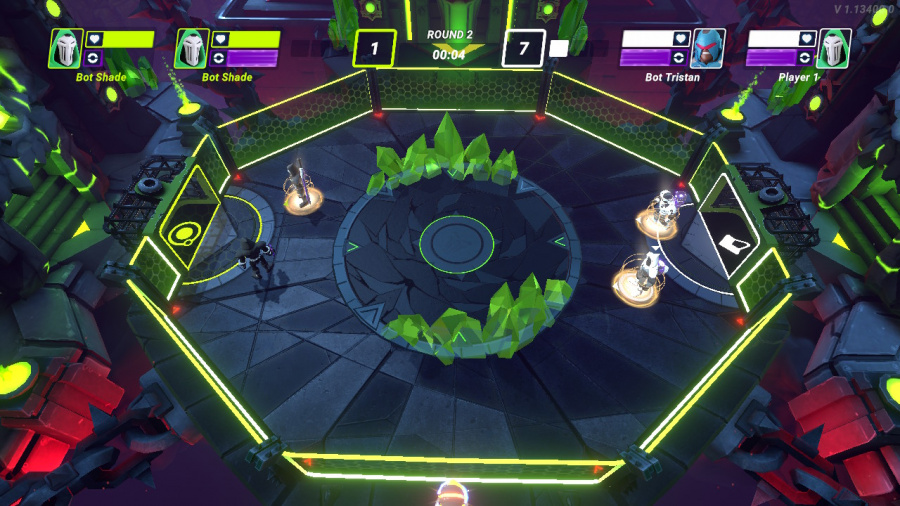 Booting up HyperBrawl Tournament for the first time runs you through a brief tutorial that summarizes all of your moves but, as it does so, it neglects to mention one very, very important point; you can hold the shoot button here to build up your shot power and unleash a vicious blast capable of K.O.’ing your foes and rebounding the ball off every surface of the game’s shifting arenas. It’s a discovery you’ll no doubt make very quickly on your own but, for us, it’s one that should have been screamed from the rooftops ASAP because knocking out your opponents and blasting the ball off walls, around barriers and through portals in this game never grows old.

Hold up. Did we say “shifting arenas”? Why yes, we did. In order to spice matches up a bit, Milky Tea has peppered play areas with rotating floors, columns, sliding walls and portals that can be used to teleport the ball which you’ll need to navigate by dodging, fighting, passing and, more importantly, utilising your hypercurve skill. Upon taking a shot at your opponent’s goal (or head) here you can use your right thumbstick to swerve the ball around in an exaggerated manner in order to avoid obstacles or hit your target in a spectacular fashion. It’s a neat little gameplay wrinkle that, alongside all of the other moving parts and offensive options on offer, means matches are capable of striking a sweet balance between straight-up smashing and smart strategizing. 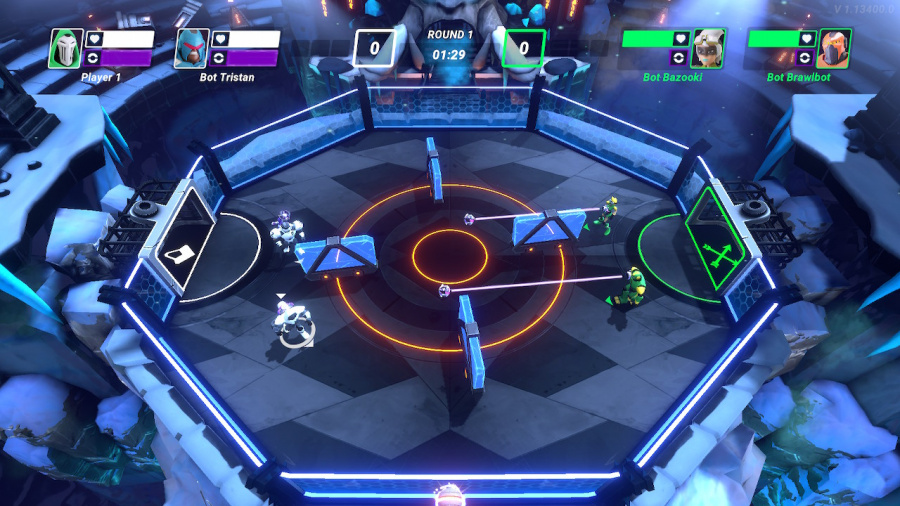 There’s definitely room here for dedicated players to formulate plans that enable them to absolutely dominate their opponents and these plans are aided immensely by the plethora of weapons and gadgets each combatant has at their disposal. Upon selecting your team’s two heroes before kicking off you’ll be given a choice of equipment ranging from great big slam hammers that charge up for an earth-shattering shock, cyclone swords that see your player spin around while shredding everything in their path, mag beams that pull the ball towards you, deployable shields, turbo boosts that can be lined up to flatten foes and more besides. Combining these offensive and defensive tools with your hypercurve ability, hypercharged attacks and those moving arenas gives matches here a real sense of chaotic arcade fun that nails that “just one more go” vibe and leads to some pretty excellent action, especially online where human foes do a much better job tactically than the game’s bots.

In terms of modes, besides that online element where you’ll climb the global leaderboards as you kick off against teams composed of one human opponent and an AI buddy, there’s also an arcade offering allowing for local multiplayer and bot-based combat and a campaign that sees you face off against AI teams to win the Galaxy League and Cosmic Cup tournaments. We would have loved to see an online component that facilitated groups of four human players but, overall, there’s enough here to keep you busy and it’s all backed up by the usual system of loot boxes containing all-manner of cosmetic unlocks and an in-game currency that you’ll earn by simply playing matches. 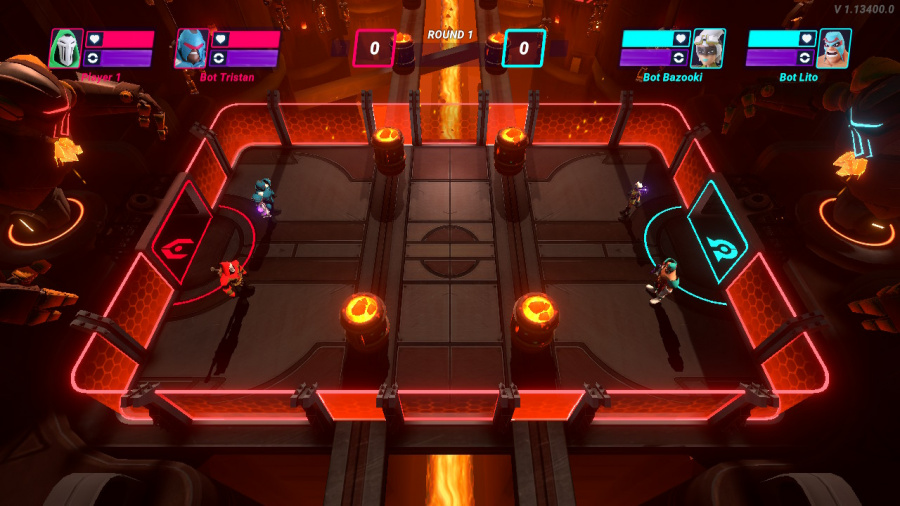 Where HyperBrawl Tournament does skew a few of its shots slightly wide is with regards to a system of respawning that sees your enemies reanimate in front of their own goal in pretty short order, meaning you have precious little time after K.O.’ing them to score before you’ve got a defensive wall in front of you once more. We can see why Milky Tea have gone with this option — things would get pretty high-scoring if you respawned away from your goal — but it can get a little infuriating once in a while. Elsewhere, the action in handheld can sometimes get a little too chaotic to make out perfectly clearly, although the more you become accustomed to proceedings the less this is a factor, and matches can feel a little bit sluggish at times in docked mode. There’s also the issue of the game’s bots which, while doing a reasonable enough job, are no match for human players and, as we mentioned, it’s a real shame the online doesn’t allow for proper 2v2 action.

Overall though, what’s here is a healthy dose of arcade fun that’s got more than enough about its core mechanics to make for a surprisingly strategic and chaotic good time, especially when you take things online where, for now, there seems to be plenty of human opponents to pit yourself against. It may not hit the heights of classics like Rocket League or Laser League, but HyperBrawl Tournament has got its neon hooks into us regardless with its quick knockabout matches ensuring we’re always up for just one more round.

HyperBrawl Tournament is a fun and addictive futuristic handbrawling effort that arms its players with a wealth of weapons, tools and attacks and unleashes them on a variety of obstacle-filled arenas that make for chaotic and surprisingly strategic matches. Things can get a little muddled in handheld mode from time to time, docked games can feel a little sluggish here and there and we’d love to have seen proper 2v2 human matches facilitated online but, overall, this one’s a decent offering that scratches that Rocket League, arcade sports itch.