If you’re a fan of relentlessly brutal open-world survival sims that fling you sans ceremony into a dangerous wilderness full of death and danger, then Creepy Jar’s Green Hell might just be right up your street. Here is a survival effort that sticks admirably to its core conceit, never once allowing you an unearned foothold in its Amazonian rainforest setting. It brutalises you at every opportunity, forcing you to adapt quickly or die repeatedly, and lands on Switch in a decent port that performs well at the expense of the usual graphical downgrades and a handful of slight control niggles.

This is, from the very outset, a survival game that absolutely earns the “hell” in its title. As you slowly inch your way through the dense jungle environment into which you’ve been dropped, you’ll be faced with the immediate threat of dehydration and starvation and – as you attempt to scavenge a means to solving these most basic and pressing of problems – you’ll be poisoned, bitten and broken repeatedly. This is a world full of dangerous plants and deadly animals, from snakes and scorpions that strike from the shadows and blight your blood with the ticking timebomb of venomous poison, to large predators such as jaguars, pumas, caimans and, of course, the local indigenous tribes who – quite rightly – do not hesitate to come at you with great big knives and pointy, shooty arrows. 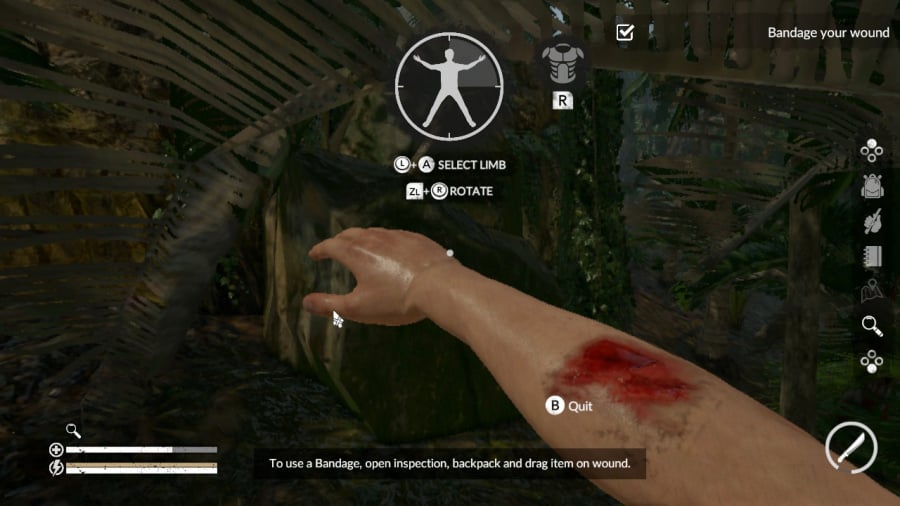 Just getting some sort of reliable foothold in Green Hell is an arduous task, but, very slowly, you will begin to learn from your mistakes and start to get to grips with the harsh environment. You’ll learn the importance of sleep with regards to restoring vital energy, for example, and how you should never drink dirty water for fear of nasty stomach-eating parasites – or indeed to wade in that same water with open wounds lest they’ll quickly become infected. Mysterious bugs and plants you’ll find dotted around need to be experimented with in order to test their effects; does this great big slimy mushroom provide nutrition, does it have healing properties or is it simply going to kill me stone dead the second it passes my lips? Should I try to eat this fat, wriggling larvae or neon-coloured snail completely raw in order to provide emergency sustenance, or do they need to be cooked?

As you feast on the various creepy bugs, putrid fruits and mystery liquids you stumble upon in the jungle, you’ll rely on your rather nifty smartwatch to keep you up to date with how you’re doing via its Macroelement Scanner. A clever and concise system, it shows you your current protein, carb, fat and hydration levels with a simple push of the left D-Pad button, and can also be toggled between a GPS that you’ll need to combine with a map (in order to figure out where you are) and a clock to let you know just how long you’ve got before you’re plunged into total darkness once again. You know how to make a torch, right? 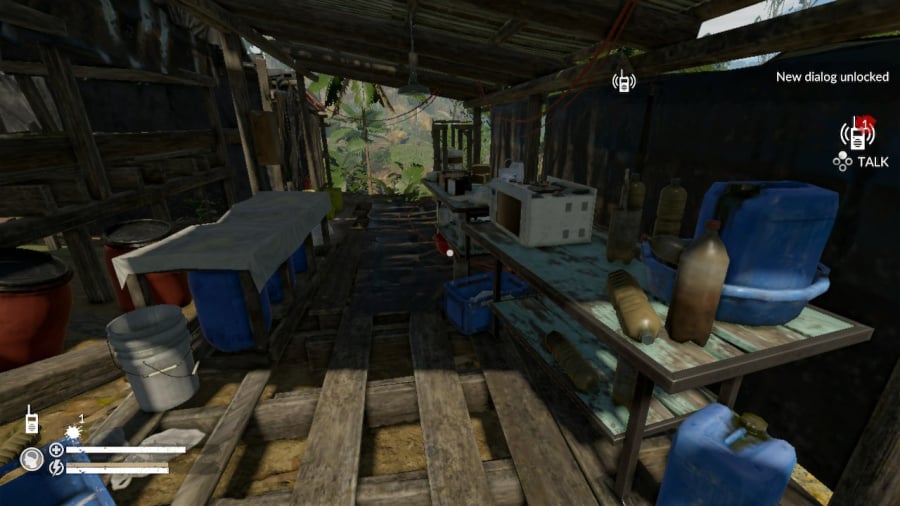 The various maladies you constantly inflict upon yourself as you experiment and explore your new rainforest home are treatable through an equally nifty – and pleasingly visceral – body examination system. This element of the game sees you switch focus between each of your limbs, rotating them around slowly in order to find and remove leeches, burst horrifying boils, dig out wriggling parasites that have burrowed their way underneath your skin and apply rudimentary leaf bandages and plant-based salves to nasty burns, breaks, rashes and deep, deep cuts. It is every bit as grim and explicit as it sounds, but it’s also addictive and rather satisfying stuff. The first time you get bitten by a rattlesnake and realise that you have the means and expertise required to combat its venom is a genuinely elating experience, and crafting bandages laced with herb potions or applying the correct medical procedure to a nasty injury gives you a real sense of mastery over your surroundings.

It is slightly unfortunate, therefore, that the controls in this Switch version – which try their best to provide a reasonable replacement for a mouse and keyboard – make interacting with this system, and much of the sometimes finicky crafting and building elements, a bit more of a chore than we’d have liked to see. It’s certainly not a deal-breaker, and it’s something you’ll get better at as time goes on, but there’s a level of clumsiness at times here – holding combinations of buttons in order to select body parts or rotate limbs – that makes things feel a tad cumbersome, especially in the midst of a dire emergency. This extends to the game’s journal, too; an invaluable resource which gradually fills with recipes and construction plans as you discover them, something that you’ll use constantly but which suffers from somewhat unresponsive controls and a tendency to really take its time as you attempt to peruse its pages. 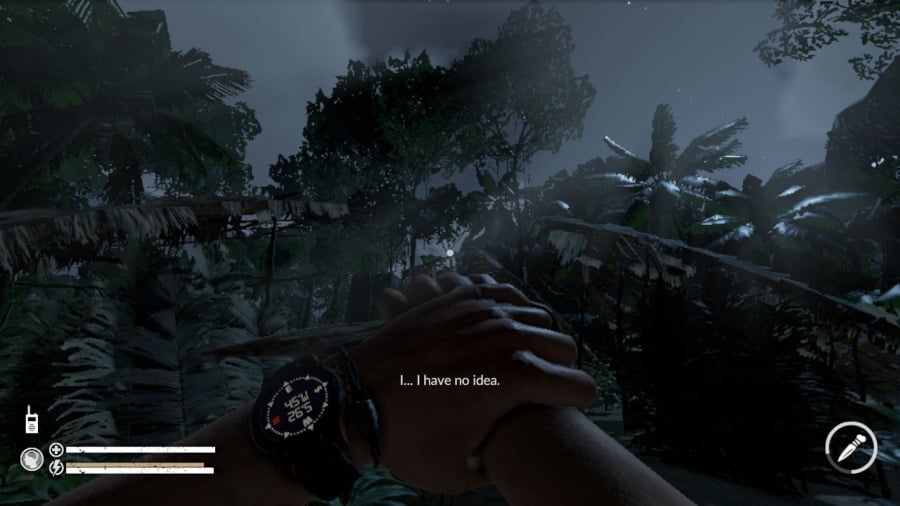 And there are many, many pages, as Green Hell comes with a robust system of construction and crafting that gives you a ton of weapons, tools and habitat options to choose from and feels satisfyingly grounded in actual common sense. How you think you might create a fire to cook the disgusting yellow snails you’ve just collected is pretty much how it actually works here. Grab a bunch of sticks for fuel, then a further few to rub together with some dried leaves and you’re all set for a warm dinner. How you assume you might make a simple covered structure, a trap to catch a meal or a basic weapon or tool is also likely along the right lines. A stick, stone and some vine to act as rope are all that’s required to create a simple axe to chop with, for example; add a couple of jagged animal bones to this and you’ve got yourself a rather violent weapon.

Of course, none of this is in any way as easy as it sounds; we died repeatedly just staying alive long enough to gather wood for a bloody fire, and early hours of the game see you really struggle as you figure out some absolute basics, such as how to collect clean drinking water (coconut shells are your friend), but it’s a struggle that’s offset by the extreme satisfaction of overcoming a tough obstacle. We spent an age just getting an extremely rudimentary camp up and running in survival mode, slowly piecing together the most small-scale, simple wood and palm leaf structures – a necessity if you want to actually save your game – and providing ourselves with a clean water collection system and reliable heat source with which to cook. Finally, after hours of trial and torture, a base from which to venture out into a world that, no matter how familiar you become with it, is always capable of killing you in a reckless instant. 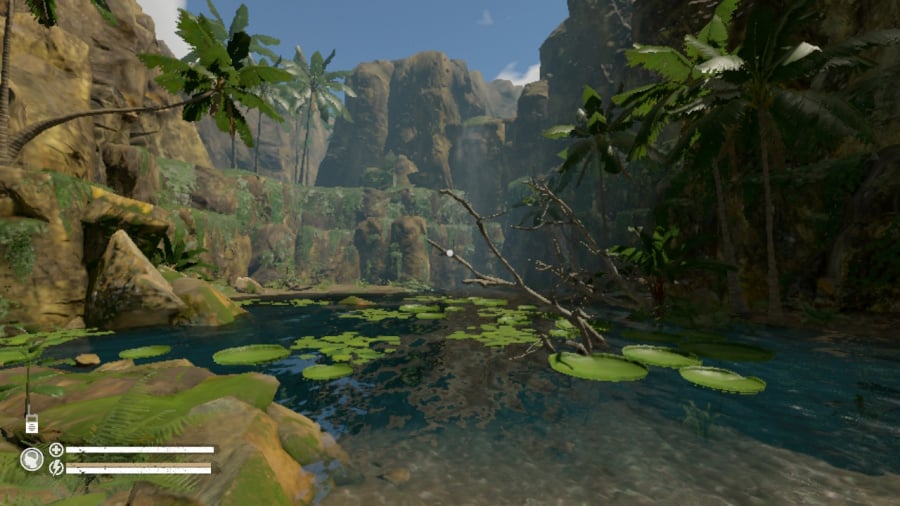 In a pleasant surprise for a genre not particularly known for its storytelling, Creepy Jar also introduces a reasonably entertaining narrative element to the usual mix with a story mode here, providing a backdrop to its constant struggle to survive that’s filled with just enough intrigue to keep players pushing on through as they get to grips with the laws of their violent new surroundings. Assuming the role of Jake Higgins, you’ll set out with just your fancy smartwatch, a map and radio in search of your wife Mia who’s gone missing after leaving your camp to make contact with the indigenous Yabahuaca tribe. It’s a tale filled with mysticism and environmental concern that does a good job of presenting you with constant challenges and a sense of purpose and direction as you stumble around the rainforest – although it doesn’t quite manage to avoid falling into the trap of having its protagonists come across as rather spoiled white folk intruding where they simply don’t belong.

Alongside its straight-up survival mode and story element, Green Hell also serves up a bunch of bespoke challenges to complete and these quickly became our favourite part of the game. Starting off by tasking you with finding and lighting a simple campfire in a set amount of time, things get increasingly difficult as you’re asked to build a raft, collect meat from certain animals, catch a variety of fish and even craft a full suit of metal armour for yourself. It’s hellishly difficult stuff at times but it does a fantastic job of showcasing just how flexible and deep the survival systems at work here really are. 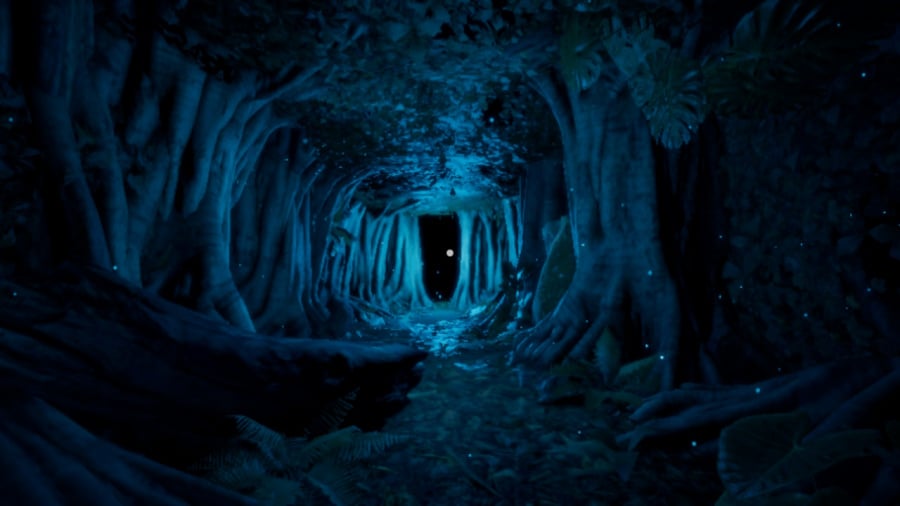 In terms of this Switch port, as we mentioned there are a few niggling issues with controls and, as expected, there’s been a notable graphical downgrade from the PC version of the game. This one still manages to look pretty good for the most part with excellent volumetric effects and an impressive dynamic weather system still present and correct, but it does also suffer from some rough pixelation and plenty of low-res textures.

However, these downgrades have resulted in a game that sticks to its target framerate pretty much perfectly in both docked and handheld modes, which is a huge win in our eyes. There is also the rather disappointing fact that the multiplayer aspect of the PC original has been entirely excised here. This port is apparently several juicy content patches behind its forebearer as things stand right now though, and so we live in hope that all of this – including that missing multiplayer component – is added in the very near future.

One area that thankfully hasn’t seen any downgrading or excisions is Creepy Jar’s fantastic sound design. Playing Green Hell with your TV turned right up or with a pair of headphones jammed in your listening bits is a hugely atmospheric experience, its jungle full of mysterious creaks and terrifying calls of the wild – not to mention some seriously disturbing maniacal laughter and bizarre whispering in the total darkness of its lethally dangerous nights. The jungle here really does feel fully alive at all times. 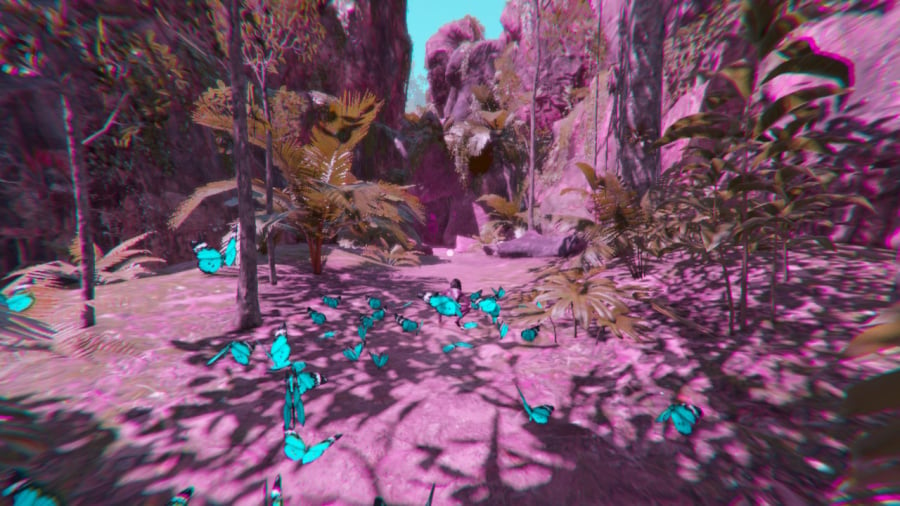 For fans of survival games who enjoy a stiff challenge, Green Hell is an easy recommendation. It’s absolutely tough as nails and can be infuriating stuff at times, especially early doors where there’s a ton of repetition to deal with as you try to find your feet but, stick at it and this is just about as deep and satisfying a survival experience as we’ve come across in recent times and easily one of the finest examples of its genre currently available on Switch.