Amidst the din of the many exciting announcements made at Nintendo’s recent Indie World Showcase it may well have been pretty easy to miss Stone Lantern Games’ Kickstarter-backed Evergate. This wonderful little puzzle/platformer stealth-dropped onto the eShop during the show and not only has it turned out to be one of the standout titles from the event, it’s also one of the very best examples of its genre we’ve played in quite some time. With delightfully clever level design, pixel-perfect platforming, a beautiful art style and sumptuous orchestral score to back the whole thing up, this is a puzzler that starts out strong and goes from strength to strength as you traverse its intricate little world.

In Evergate you assume the role of Ki, a tiny child-like soul who must journey through the titular portal in order to be reincarnated but, just as you’re about to be guided through this gateway from the hereafter, mysterious memories from a seemingly unknown life block your path, forcing you to wield the power of Soulflame in order to traverse the various far-flung locations in which they take place. As the story progresses you’ll learn the secrets behind these memories and how Ki is intrinsically linked to their origins. 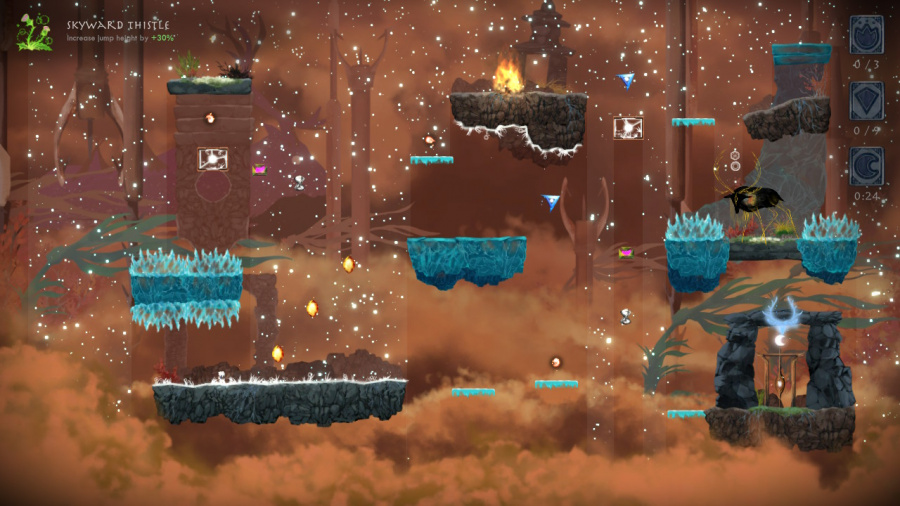 Gameplay here couldn’t be simpler starting out, pressing ‘ZL’ activates your Soulflame, slowing time momentarily and drawing a straight white line in whichever direction you aim. By pointing this white line at yellow crystals which fill the early stages and pressing ‘Y’ you’ll activate a boost that propels you skywards. However, just aiming from any old angle won’t suffice and you’ll need to ensure that you aim at the crystals in such a way that you also make contact with magical Source-covered surfaces in order to activate your powers. Early areas see you use this power to cross large gaps and manoeuvre your way up and around tricky ledges to reach a door to the next area. However, the real genius of Evergate is in how it continues to build on this seemingly simple mechanic in each of the ten worlds that you’ll encounter during your journey back to earth.

Moving on from the first world and its boost crystals you’ll be introduced to magical floating boxes that materialise platforms directly underneath your feet and fireworks which fizzle through the air, burning source fauna and activating great stone blocks that barricade your path. There are glass platforms that can be smashed or made to move along luminous currents, space rifts that allow you to swim around in interdimensional goop above platforms, teleportation devices that zip you from one side of the screen to the other and much more. Every world you encounter here, from the secret gardens of China to the blizzards of Alaska and beyond, introduces a new gameplay twist that you’ll need to get to grips with as you try to figure out how to make your way from a stage’s starting point to its exit. These mechanics are then fused together in fiendishly clever ways, forcing you to consider multiple moving parts at the same time. What started out simply quickly becomes a stern test of both your reflexes and your capacity to figure out the order in which you need to activate a level’s tricks and traps to succeed. There’s no one specific or prescribed way to run a gauntlet here and it’s massively addictive working out your own route home. 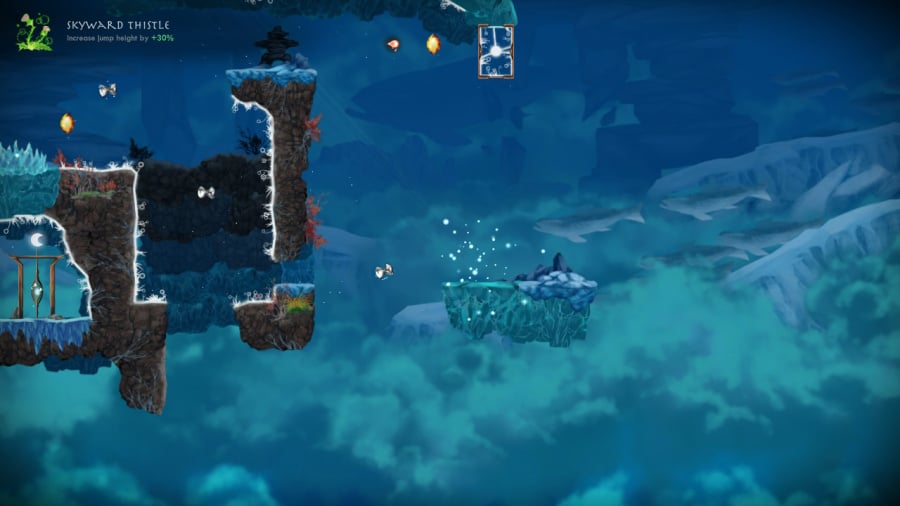 Layered on top of this chorus of constantly evolving elements are artefacts, three of which are available to unlock in each world, giving Ki all manner of boons to help her traverse areas. The first artefact you’ll unlock gives Ki an increase in boost power, enabling her to blast off from crystals and other objects with more momentum and, as you progress, you’ll unlock lots more, including the ability to stand on fragile surfaces without them crumbling, increased movement speed, target-locking, magnetised collectibles and imperviousness to falling ice-shards. These skills start out pretty much area-specific but, by the time you’re deep into the game, you’ll find yourself experimenting in order to get yourself out of some seemingly impossible binds.

All of the artefacts available to Ki throughout her journey are unlocked using essence orbs which you’ll find floating around stages and, cleverly, in order to keep the essence you collect in any given stage, you’ll need to ensure you grab every last one of these orbs. It’s not enough just to figure out a way out of stages here if you want to do well, although doing so will see you move on to the next area. In order to gain new abilities and help yourself further down the road you’ll need to perfect each and every stage. It may sound a little wearisome on paper but the quality of the level design in Evergate makes it an absolute joy to figure out how to grab every orb and interact with every secondary element you need to on your way up, out and back to the game’s library hub area. 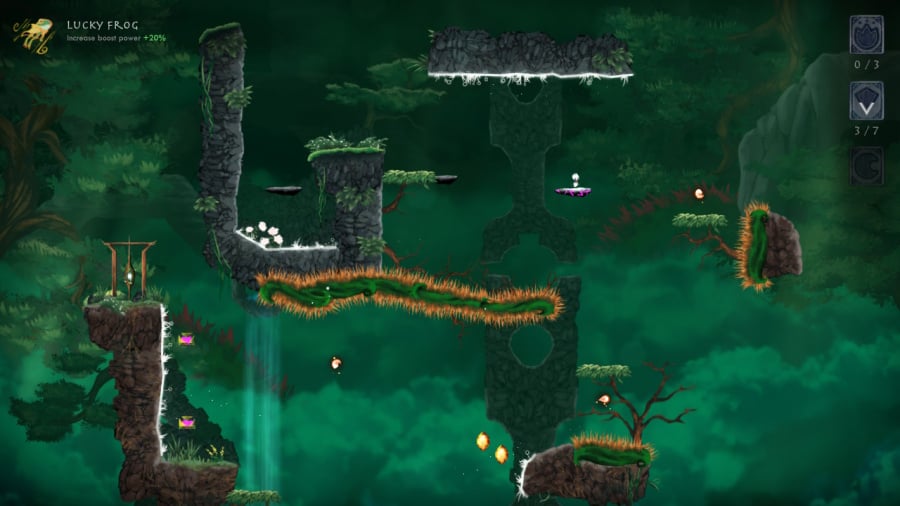 There are certainly a number of times where you’ll temporarily feel like you’ve hit a dead-end as you blast your way through Ki’s story, but the four-strong team at Stone Lantern Games really has managed to nail that ever-so delicate balance between being difficult enough to stop you in your tracks now and again and not so tough that you’ll give up or need to resort to guides to make it through. The puzzles and stages here are immaculately well designed from start to finish. From the get-go you’ll be scratching your head, figuring out different routes and manoeuvres, switching artefacts around and pulling all of these disparate elements together on the fly in order to make your way to a stage’s exit point. Then, just when you start to feel comfortable with what’s that’s been thrown at you, the game adds great big flying crow enemies, giant elk door wardens, stone dragons that need set ablaze and rode across stages and a whole host of other moving parts and environmental hazards.

Alongside the ten multi-part worlds you’ll encounter in the game’s main campaign you’ll also slowly unlock bonus missions which act as sort of challenge arenas that take each area and its mechanics from the main campaign and give you a super-charged version to make your way through, testing your skills to the absolute limit. You also have the option to turn on a speed-run mode and it’s this element that’s tied to perhaps the weakest element of Evergate. As well as grabbing all of the essence from every stage you’ll also be challenged with completing each one in a ridiculously short amount of time, doing so earns you bonus essence, but it also feels like an unnecessary addition that isn’t particularly well implemented. Speeding through these courses, whilst possible, just doesn’t really feel fun or gratifying and this whole aspect of the game just feels like a little bit of an afterthought. 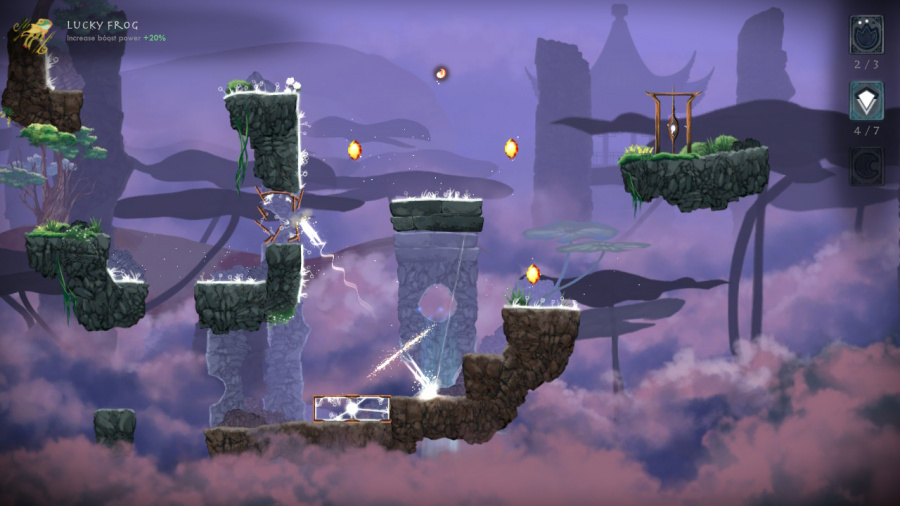 Performance-wise on Switch, Evergate is a wonderfully smooth experience and we didn’t experience any framerate dips, bugs or technical issues in either docked or handheld mode during our campaign. The game’s Ori and the Blind Forest-esque visuals and rich orchestral score are a joy, controls feel crisp and precise, nipping in and out of different levels or back to the hub area is almost instantaneous, level transitions are wonderfully animated and overall, this is just an exquisitely well put together series of superbly designed puzzles wrapped in an engaging little tale for fans of the genre to disappear into for the ten hours or so it will take to see everything through.

Evergate is a wonderfully designed puzzle-platformer that starts off strong and goes from strength to strength over the course of its campaign. Every new world you encounter here adds a new twist to proceedings, gradually becoming more complex as it layers mechanics on top of one each other, enabling you to experiment and come up with your own unique ways to bound across its intricate levels. Speed-running here, for us, feels like it was tacked on for no real reason but, besides this one little misstep, this really is an essential purchase for puzzle/platforming fans and a standout example of its genre on Switch.


OrangePixel To Launch ‘A Dozen’ Games On Switch, Starting With Meganoid