In 1977, the United States launched the Voyager program, in which NASA launched two probes into deep space as a sort of “bottle into the cosmic ocean”. Aboard these two probes, golden phonograph discs were included bearing images and sounds relevant to all cultures and forms of earthly life, and these were placed aboard as a hopeful gift to any intelligent life that could encounter the probes. Disc Room, the newest release from Devolver Digital, is based on the premise that life did find those probes, and the resulting experience is something to behold. It may be a little bit on the short side, but Disc Room proves to be a thoroughly rewarding game that gets a considerable amount of mileage out of a relatively simple gameplay idea. Through this strong execution, it proves itself to be more than the mere sum of its parts.

Disc Room could be best described as a bullet hell shoot ‘em up, with the little caveat that you have no weapon with which to shoot ‘em up. Each room is a veritable meat grinder of whirling sawblades that only grow in number and speed as time passes, and any mistake you make is met with a swift and bloody end. The question, then, is not if you will die, but when. Such a hopeless sort of game sounds discouraging, but it’s remarkable how effectively Disc Room manages to reward your failures and keep you just interested enough to play another round. 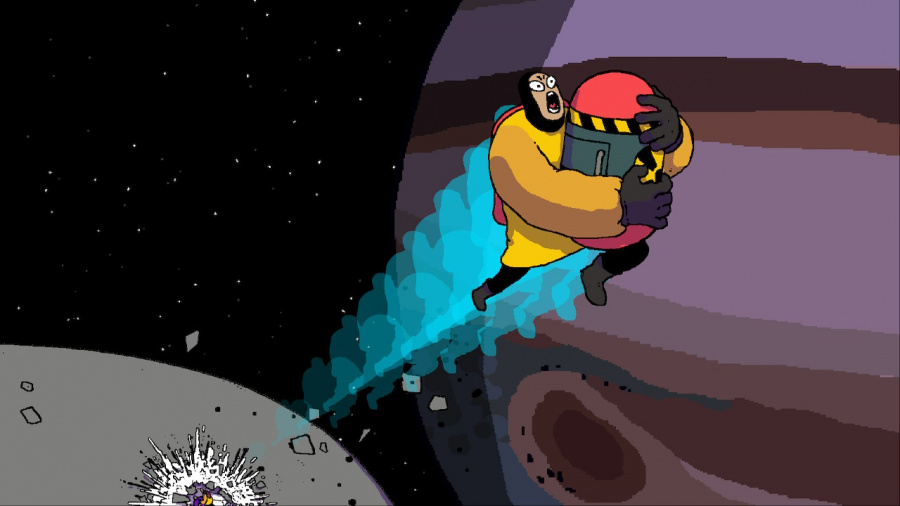 Firstly, the challenges you face in each room – though technically insurmountable – don’t demand too much from the player to progress. More often than not, unlocking the next room is a simple matter of surviving for around ten seconds in the current room. Granted, every second in Disc Room feels like it passes at a glacial speed, but these relatively achievable goals in each room make the allure of subsequent attempts all too easy to fall victim to. After all, if the goal is ten seconds, surely you have time for one more try? Or ten? And when you fail, it’s not like there’s any meaningful sense of punishment; the clock is simply reset and you can jump back in for another go with an instant button press. These factors together – the simplicity of your goals and the ease of chaining multiple attempts together – can make for a wonderfully addictive experience, one that’s raw and continuously demands all your attention.

Then there’s the idea that death itself is included in an overarching, perverse sense of progression, which removes even more of the sting from your failures. As you clear new challenges in Disc Room, you’ll encounter dozens of new sawblade types which are sure to ruin your day. Some are large, some are small. Some are stationary, some hunt you down. Some spawn other discs, and some can phase in and out of existence. It’s positively maddening having to deal with many of the combinations used across rooms, but there’s a collectable aspect to dying to each new sawblade that governs progression. So, if you want to take on the latest ‘boss’ fight, you’ve got to make sure you’ve thoroughly died to as many kinds of blades as you can access. 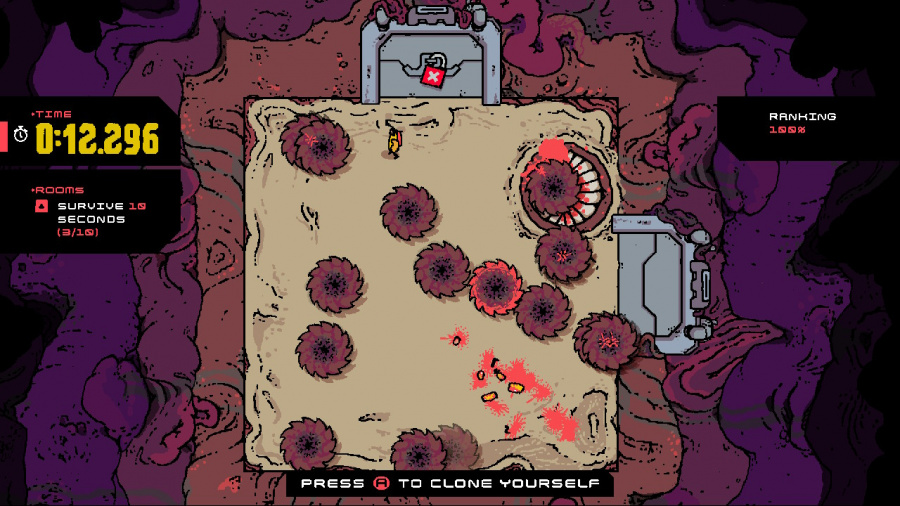 This is where a light puzzle aspect enters the gameplay, which helps keep things from becoming too rote. Sometimes it takes a set amount of time until a unique sawblade spawns in the room, or you need to fulfil a certain chain of obscure events to get one to appear. Disc Room will occasionally have subtle clues to help guide you towards the answer, but often you simply must intuit these things yourself, which make for some of the most memorable moments. If you do pick up Disc Room, we’d strongly encourage you to resist the temptation of looking up the answers online, as a big part of the fun here is the trial and error that goes into unravelling these enigmas before that cathartic ‘aha!’ moment hits.

Harrowing as it may be, one would expect the simple “dodge everything that moves” idea at the heart of Disc Room would grow stale rather quickly, but the developers manage to keep it fresh by lightly changing the rules depending on where you are on the overall map. One early section, for example, will only run up the clock if you happen to be standing on set portions of the floor. Another section starts the time at a set amount and subtracts a second every time you collect a randomly-spawning ball on the floor. That central idea of avoiding discs never changes, then, but the way in which you’re expected to do so can vary quite a bit, which adds some much-needed gameplay variety. 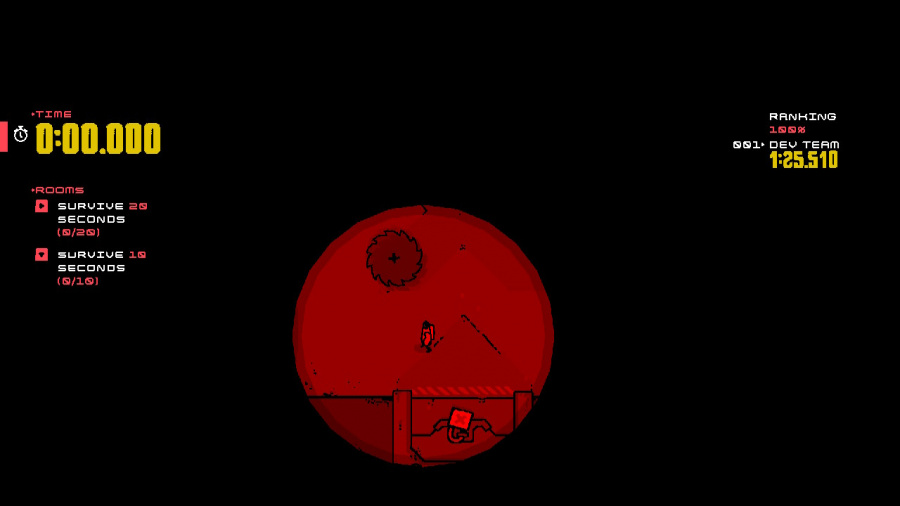 Another key factor for variety is the handful of unlockable abilities for your character, which greatly increase your odds. These can allow you to do things like dodge rolling, slowing down time, or setting off a concussive blast that knocks away oncoming discs. None of them are game-breaking and you can only have one equipped at a time, but each can be quite effective depending on what discs a room contains. Moreover, the measured rate at which you unlock them grants a nice feeling of progression not unlike a Metroidvania. Our only minor complaint is that some abilities feel a little too situational to be of much use; it would’ve been nice if the balance of abilities was a little more levelled.

Make no mistake, Disc Room is meant to be an extremely difficult game, but we feel special attention needs to be paid to the range of accessibility options that it includes to ensure that players of skill levels can get the most out of it. Through a menu in the settings, you can tweak percentages of factors like disc movement speed or room goal difficulty to customize the experience best to your abilities. What’s nice about this is that there’s not a fixed ‘easy mode’ that can be patronizing to somebody of mid-level skill; you can make a series of minor tweaks to several different parameters until the difficulty feels perfectly matched to your ability. Moreover, if you’re truly a masochist, you can tweak the modifiers the other way and maximize the pain. The point being, Disc Room features a truly modular difficulty level that caters to players of all skill levels without compromising the game design or gating content, and proper execution of such a feature deserves applause. You don’t see that sort of thing too often in games these days, and more games would benefit from approaching difficulty in the way that Disc Room does. 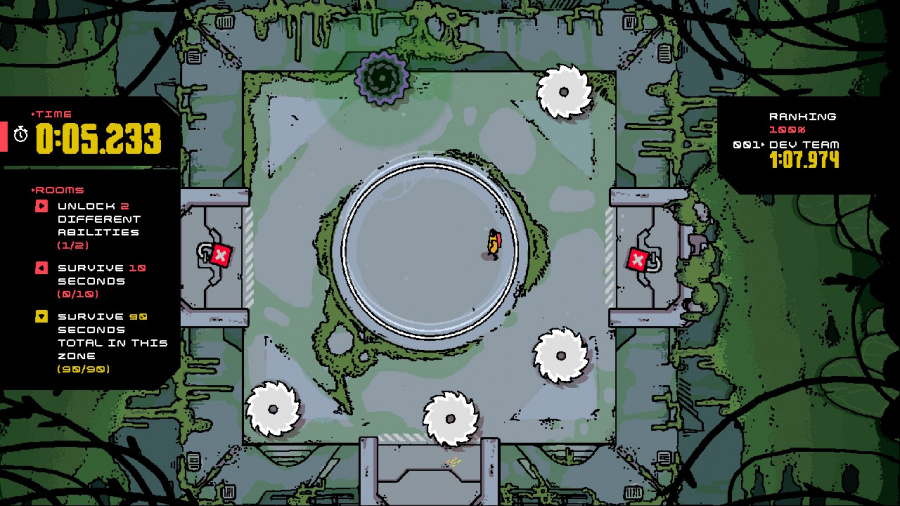 Depending on your tastes, this may come as a positive or a negative, but we feel it bears mentioning that Disc Room is quite a short experience. We managed to clear the first map in a measly two hours, and this was despite taking things slow and getting nearly ninety percent on our profile. The second map (which you unlock after beating the game) acts as a post-game ‘hard mode’, but this is still something which only takes a couple more hours to clear out. If you want to thoroughly rinse Disc Room of every conceivable secret, then maybe you could manage to wring ten hours out of it, but it’s difficult to imagine it taking much more. To be fair, the sort of design at the heart of Disc Room lends itself well to short length – we can’t imagine this constant stop-and-go pace working well as a fifty-hour epic – yet it feels like Disc Room is only just beginning to show off its potential when the credits roll.

Disc Room employs a rather unique presentation style that somewhat echoes comic books, with all elements on screen having nice and thick lines to ensure that readability is maintained in the chaos of having dozens of small moving objects on screen at once. Despite the frequent swarms on screen, we never once lost sight of our character. It is clear, however, that the focus with this art style is more on function than aesthetics, as Disc Room doesn’t really try to wow much with its graphics. Still, what’s on display here is more than satisfying, and above all, the visuals serve to support the gameplay seamlessly.

Like a lot of other releases in the Devolver line up, Disc Room is a wonderfully unique release that stands out well on the eShop. That premise of “a shoot ‘em up without the shooting” seems silly at first, but very quickly shows itself to be an interesting idea that’s taken in plenty of fun directions. Disc Room is tough as nails in all the right ways, and this combined with plenty of secrets, solid accessibility options, and an intriguing premise makes for an experience we can easily recommend. Don’t pass this one up, it’s definitely worth your time.