RageSquid’s Descenders, which originally released into early access on PC all the way back in 2018, has always felt like it could be a pretty good fit for the pick-up-and-play nature of Nintendo Switch. A unique roguelite offering that swaps the dingy dungeon combat usually favoured by the genre for viciously fast downhill biking, its quick and addictive level design seems a perfect match for dipping in and out of in portable play.

When it was finally announced that the game would indeed be heading our way, the only real concern we had was whether we’d end up with a port that could handle the intensity of its extreme mountain biking experience without turning into a slideshow and – thanks to some necessary graphical downgrading – what we’ve got here is a version that absolutely delivers in this regard.

Descenders is a rather clever take on extreme downhill freeriding that eschews the carefully handcrafted tracks found in most other games of its ilk in favour of satisfyingly scrappy, procedurally-generated affairs that allow you a surprising amount of freedom to approach their challenges as you see fit. 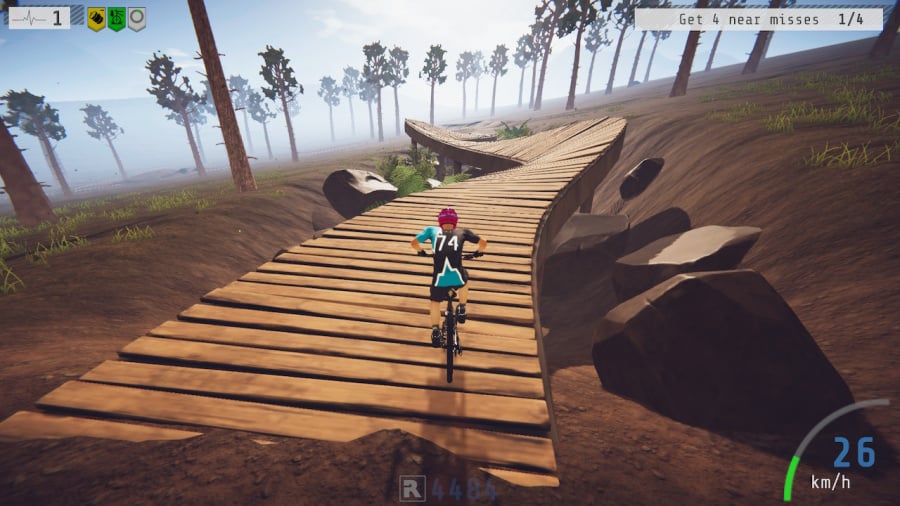 The name of the game here isn’t necessarily pulling off a constant stream of slick tricks or learning the quickest line through bespoke courses in order to run them perfectly with your eyes closed; it’s about adapting to your ever-changing surroundings and taking on stunts you think you can handle in the heat of the moment – and it makes for a surprisingly organic experience as a result. You’re free to choose how you approach courses here, slow down and stop, fling yourself at full tilt, cycle back up a hill for another run at a jump or even avoid ramps you don’t like the look of entirely, and it gives the whole thing a refreshing, liberating vibe that keeps you coming back for more.

Hopping on your saddle for the first time, you’ll be treated to a short tutorial that runs you through the essentials – how to accelerate, brake, bunny-hop, pull off a few tricks and slide through corners – before you’re unceremoniously dumped at the top of your very first randomly-generated track. As you make your way to the bottom, successfully sliding into tight bends, navigating obstacles, landing jumps and so on, you’ll earn RP that’s used to dictate your rank (hooray for online leaderboards!) and unlock all manner of cosmetics from fancy new bikes to shiny helmets and outfits.

Making it to the end of a stage then sees you bumped out to a map of your current biome – there are four of these to start out, with a further four unlocked later on – and the aim is to successfully traverse the nodes on this map towards a “boss” level where you’ll be tasked with landing a ridiculous, Evil Knievel-worthy jump in order to unlock access to the next world. 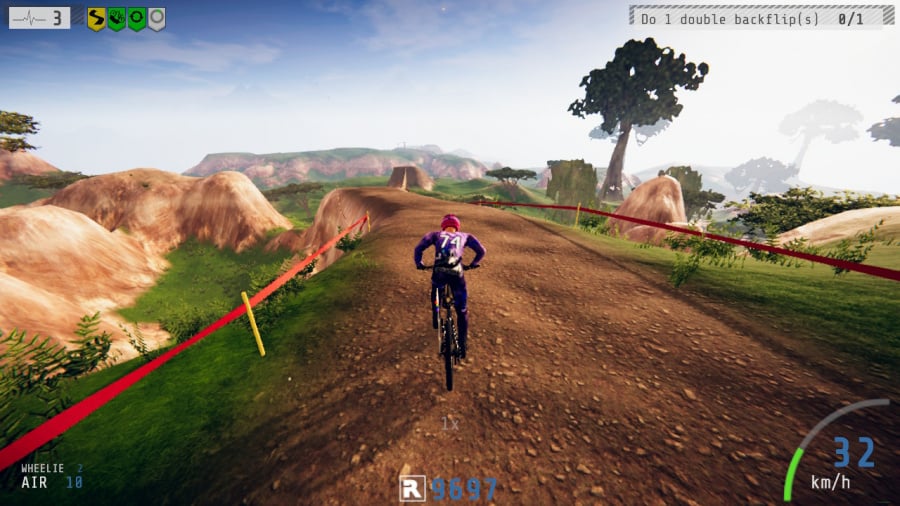 Each available node presented to you as you make your way across a biome’s map provides you with a different flavour of stage to get to grips with, enabling you to curate your runs to a certain extent. Maybe you prefer straight and steep stages over complex stunt-strewn numbers, for example, or perhaps you’d rather take on the game’s first-person headcam challenges rather than spend your time chilling in a mellow jaunt down a gentle incline. Combined with the randomly-generated nature of track layouts, all of this adds up to a game that manages to keep things feeling pretty fresh and full of variety and challenge as it repeatedly smashes you and your bike to pieces.

Speaking of smashing things to pieces, being a roguelite, the threat of death here is obviously never far away and you’ll start each of your runs with a tiny health reserve which is whittled down by taking falls or crashing – the harder the spill or bail, the more of your life reserve you’ll lose. Fortunately, this rather meagre pool can be added to on each and every stage by completing randomly-assigned objectives on your way to the finish line.

You may be charged with pulling off a couple of 360 spins or backflips, making a series of clean landings, reaching the end of a stage in a set time or blasting across one of those crazy boss jumps while successfully landing a squeaky-bum 720. As you complete these objectives you’ll boost that pool of health and these extra lives are something you’ll be massively thankful for as you move from the relative safety of the initial highland, forest, canyon and snowy peak biomes onto later worlds that pick up the pace and see you face off against evermore outlandish tracks through deserts, jungles and more. 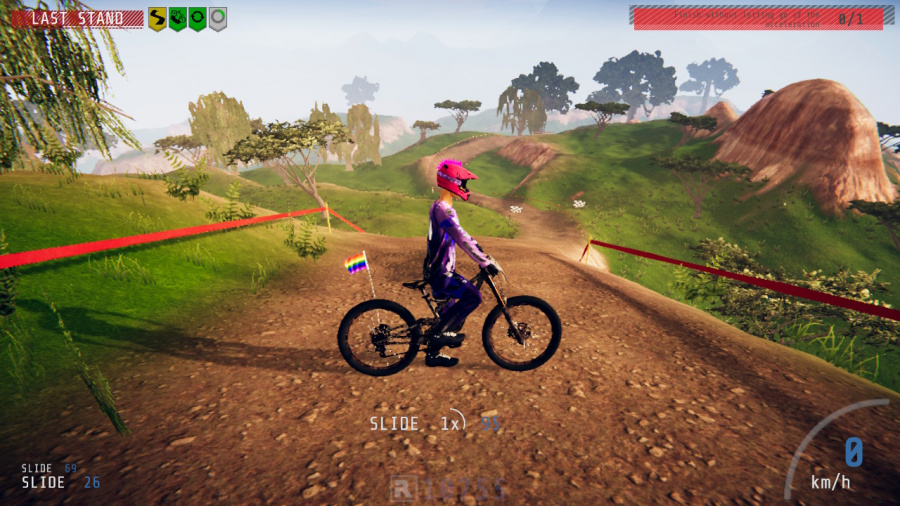 As you move through the various biomes on offer, you can also unlock shortcuts, enabling you to start fresh runs from further into the game by besting any world’s boss jump challenge three times. It’s a nice touch that keeps things from getting too frustrating or repetitive if you find yourself struggling, but we actually found ourselves choosing to return to the game’s beginning more often than not just to stockpile as many lives as we could on easier courses before heading into the final tricksy areas.

Descenders also kindly helps you out during each attempted run through its gauntlet by gifting you temporary boons which take the form of crew members who gradually unlock as you progress and aid you in all manner of ways such as widening tracks, lowering the impact of jumps, revealing more map nodes, clearing trackside obstacles and increasing your bike’s manoeuvrability. It’s well-implemented stuff that allows you to choose which boons best suit your approach to riding, and can be adapted to suit the specific nodes you’ve chosen to run as you make your way to the boss level of each biome.

On top of the game’s meaty single-player offering, there’s also a multiplayer element that sees the central hub area you return to between runs filled with other online riders and allows you to join up with pals and strangers in traditional lobbies in order to compete and rise up the online leaderboards. The multiplayer aspect of things here is a particularly strong point, and competing with a friend really sees Descenders at its additive and hilarious best. You’ll also unlock sponsors as you progress through the game, presenting you with timed daily challenges to complete in exchange for team-specific goodies and more of that all-important RP. Combine all these elements with that slow and satisfying drip-feed of cosmetic items and you’ve got a pretty cracking little indie effort that provides plenty of bang for your buck. 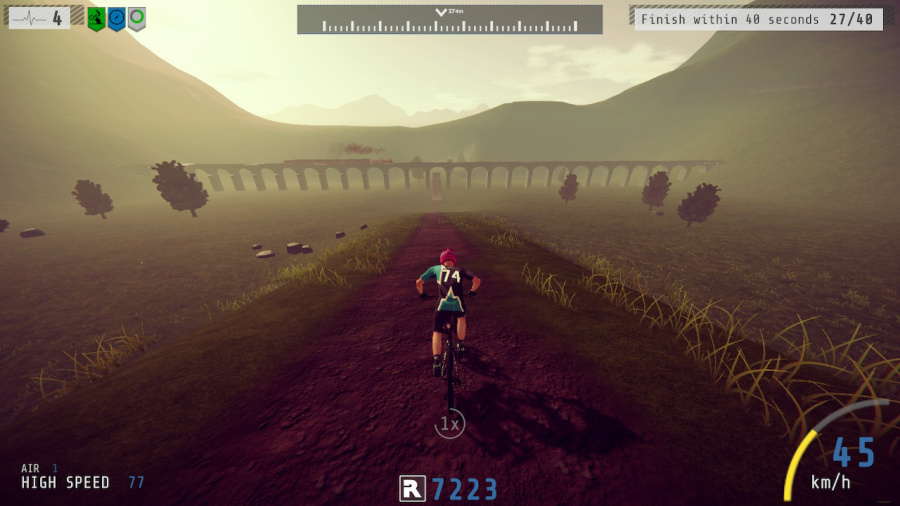 Descenders really does manage to pull off pretty much everything it aims for, and although there’s the odd randomly-generated track that doesn’t quite come together properly – you may find yourself struggling to pull off a double backflip or superman when the terrain is devoid of suitably large hills – and the whole thing does have a rather scruffy quality about it, we can’t help but be charmed by its uniqueness.

Of course, as we mentioned starting out, managing to provide a Switch port that performs smoothly enough to facilitate the game’s quick and exacting nature is absolutely crucial here, and in this respect, the devs have come up trumps. This is a solid version of Descenders; certainly one that’s seen a graphical downgrade compared to other ports – said downgrades that are even more noticeable in docked mode where rough textures and pop-in are more easily spotted – but, besides a tiny stutter that happens each and every time you cross a stage’s finish line, it’s also one that keeps things running smoothly as it flings you headlong down its tracks. 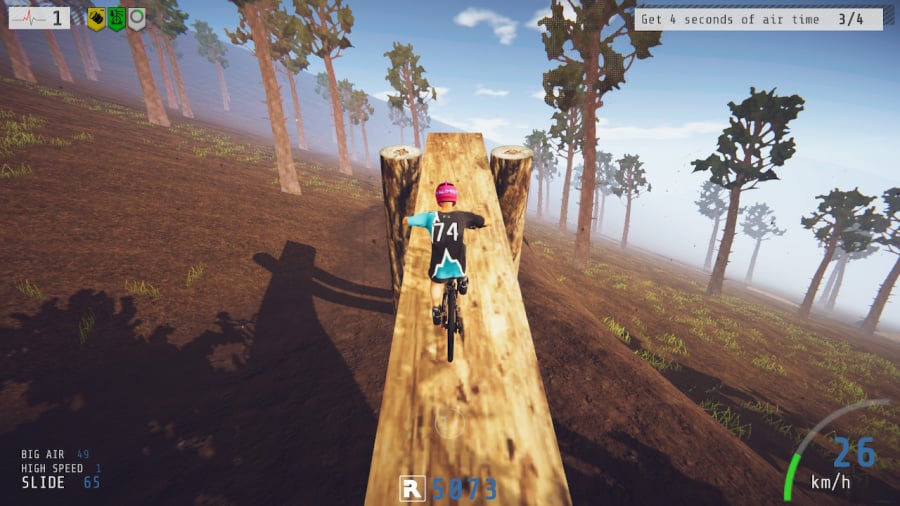 With that meaty single-player campaign, a decent multiplayer offering, plenty of unlockables, online leaderboards and the ability to create your own custom tracks in freeride mode, Descenders is a procedurally-generated delight that suits dipping into for quick sessions of portable play and rises above its sometimes scruffy presentation with fun and addictive extreme biking action that keeps you coming back for more. There’s a freedom and levity to the gameplay that manages to avoid the oftentimes infuriating nature of this particular type of game; it isn’t trying to box you in, forcing you to hit all of your marks or demanding you perform flawlessly at all times, and that’s a sweet style of freewheeling action that we can absolutely get down with.

Descenders is an addictive freeriding roguelite with plenty of content to keep players busy as they get to grips with its unique take on extreme biking action. It may be a little rough around the edges in places and this Switch port has certainly seen a graphical downgrade, but the core riding controls well, the framerate is solid and the procedurally-generated nature of courses keeps things feeling fresh. With a meaty campaign featuring eight diverse biomes, a decent multiplayer component and those all-important online leaderboards, this one’s a surprisingly robust package that comes highly recommended.

Random: The NSO Icon On The Switch Home Menu Is Driving Some Users Crazy