Book Review: Flicking Through The Vibrant World Of Yooka-Laylee And The Kracklestone

The spiritual successor to the legendary bear and bird besties, Yooka-Laylee, nearly shook the earth when they were revealed through a Kickstarter project by Playtonic Games, the brand new studio made up of ex-Rare developers. Since the original reveal back in 2015, the team has managed to put out not just one, but two Yooka-Laylee games on Switch. The first was plainly named Yooka-Laylee, which returned to the 3D collect-a-thon gameplay of Banjo-Kazooie and the second was Yooka-Laylee and The Impossible Lair, a 2D platformer in the vein of the Donkey Kong Country series with overworld elements that felt reminiscent of The Legend of Zelda: A Link to the Past.

Then in 2018, Dreamprism Press kicked off a Kickstarter for a comic book starring Yooka and Laylee. It seemed like a fairly ambitious project for a one-man band, but we’re happy to see the project was fully funded and we’ve managed to get our hands a physical copy of the book, Yooka-Laylee and the Kracklestone.

Without going too much into spoiler territory, the story follows Yooka and Laylee on a quest to find the Kracklestone, a gem rumoured to make anyone who holds it invincible. Unfortunately, Capital B and his henchman Dr. Quack are also on the hunt and it quickly becomes a race to see who can get to it first. Along the journey, the duo encounters a few of the friends they’ve made in past games, but most of the setting and enemies they come across are brand new but fit right into the Yooka universe.

The comic has a very kid-friendly feel to it, as the creator was partially inspired by the Nintendo series comics of the ’90s. You can expect plenty of puns, lots of rhyming, and the characters are always extremely expressive which really helps elevate the humour. We’d have no issues recommending this for kids and adults alike as the humour does contain a few fart jokes here and there, but it also falls in line with the playful nature of Playtonic. 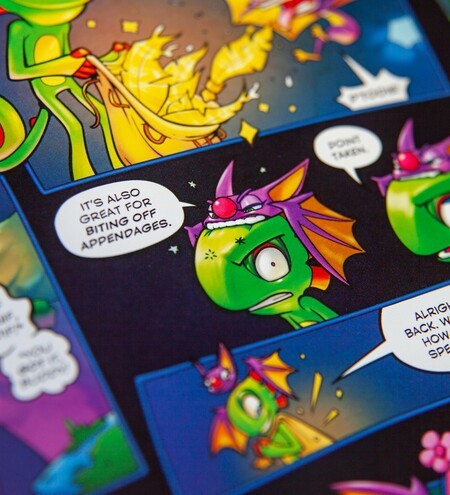 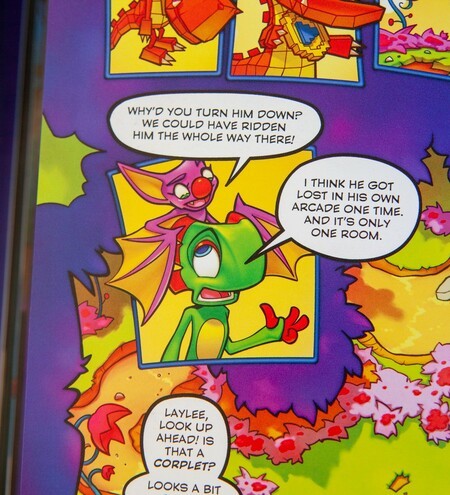 One of our favourite parts finds Yooka and Laylee making their way through a sewer and every panel features them projecting a pun about plumbing. The jokes won’t constantly have you on the floor, reeling of laughter, but there were a few points where we found ourselves cackling so hard we had to stop reading to collect ourselves. At times one could think Yooka and Laylee were hunting down the Kacklestone, right? We’ll see ourselves out.

The Kracklestone is a little over a hundred pages and depending on who’s reading, it won’t take long to finish. But so much effort was put into each and every page that you’ll want to stick around gazing at every page. Each page feels like it’s trying to leap out of the book and the Lisa Frank-esque vibrant colour palette compliments the characters and the lands they explore. There are references to classic video games snuck in here and there too, but we’ll leave those for you to discover on your own.

Yooka-Laylee and the Kracklestone is available now in physical and digital form over at the Dreamprism Press store. You can also nab THE ULTIMATE COLLECT-A-MANIAC BUNDLE for a whopping 34% off too!

How To Watch Shameless Online: Binge the Family Dramedy Free