If you ask us, Hamster should be getting more praise for successfully releasing a steady stream of Nintendo games in its Arcade Archives series. No fewer than 18 of Nintendo’s vintage coin-op titles have now been released on the Switch to date, with practically all of them available to buy for the first time in their history (unless you owned an arcade).

The original Punch-Out!! was one of the first of these releases back in early 2018. Now it’s finally time for its arcade sequel to get the same treatment, and while Super Punch-Out!! is far from the best game in the series, its addition to the eShop is still a significant one because it now means that – for the very first time – fans can finally legally own every Punch-Out!! game.

As with its predecessor, Super Punch-Out!! puts you in the boxing shoes of Little Mac as he tries to fight his way to the top of the World Video Boxing Association. Whereas the later console versions had rosters that went well into double figures, Super Punch-Out!! only has five opponents to fight. It’s actually the smallest opponent count in the whole series, because even the original arcade Punch-Out!! had you fighting through six boxers. 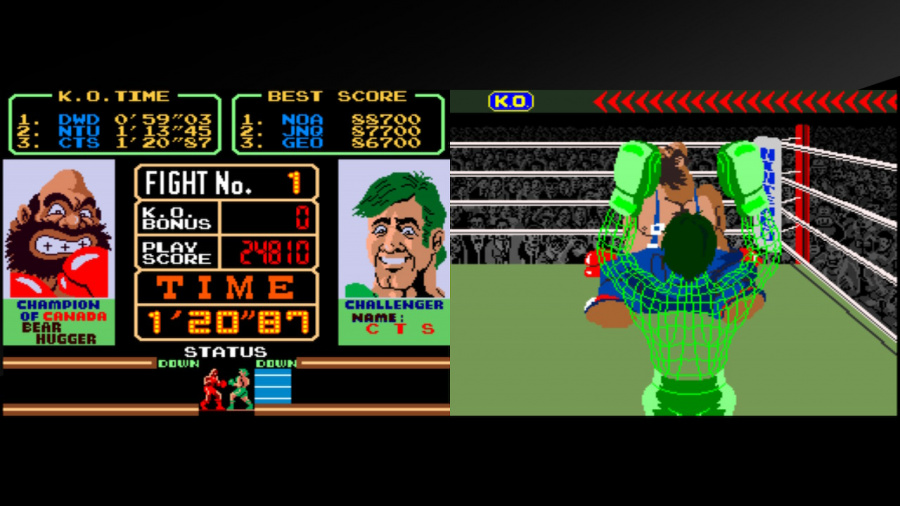 That’s not to say your five opponents aren’t still entertaining characters, of course. Starting off against Canadian lumberjack Bear Hugger. If you can get past his enormous double-handed punch attacks, you’ll then face Hong Kong champion Dragon Chan, a Bruce Lee knock-off who jump off the ropes and smack you in the jaw with a flying kick, knocking you out with a single hit.

Up third is the controversially named Vodka Drunkenski, a Russian boxer whose name was changed to Soda Popinski for the console games because the stereotype was a little too on the nose (though to Hamster and Nintendo’s credit, it’s been left unedited here for the sake of historical accuracy). Then there’s Great Tiger, an Indian fighter who fights very similarly to the first game’s Piston Hurricane, followed by the final championship bout against the powerful Super Macho Man.

Anyone familiar with the series will more or less know what to expect here. Players have four basic punches: they can jab opponents high or low, using either their left or right hand. If they continue to land hits without taking damage they’ll eventually build up a power meter which lets them execute a fifth, powerful uppercut, and that’s really it in terms of your offensive repertoire. 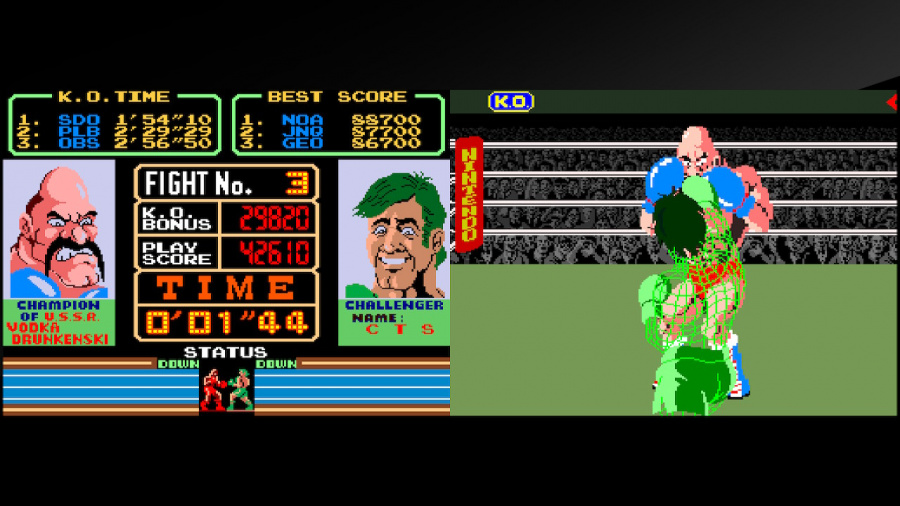 Punch-Out!! fans will know that it’s your defensive moves that are even more important, though. This isn’t a standard boxing game where you can flail randomly at opponents and hope for the best: it’s more a series of boss fights where you have to learn each boxer’s moves, how to tell when they’re coming, and how to avoid them when they do. You’re armed with a high block, a low block and left and right weaves, as well as a new duck button.

Super Punch-Out!! was the first game in the series to include this duck move, and it makes the most of it: all five opponents have at least one move that can be ducked. It can take a while to get used to as ducking is assigned to the B button, rather than Down on the D-Pad (because Down is for switching to low blocks and punches). There’ll be a few situations where you’ll instinctively press Down to duck an attack but block low instead and take a lethal hit to the face.

Considering it hit arcades a year before the NES even arrived in the west, Super Punch-Out!! looks decent for its age. The Little Mac wireframe model is as effective as it was in the first game, and the enemy sprites are nice and large, with a cool scaling effect as they occasionally move towards you. It hasn’t aged so well when it comes to sound, though. A lot of the audio samples are horrendously (but understandably) garbled and end up being the gaming equivalent of Quasimodo: charming but not very attractive. 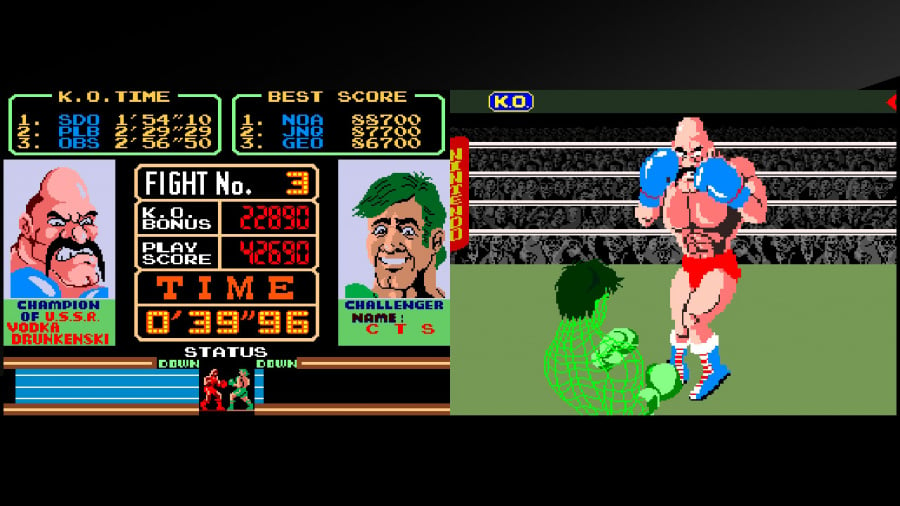 As with the original game, the Super Punch-Out!! arcade cabinet contained two separate displays: one showing the action itself, and another showing stats and other game information. Both screens are shown here, and you can choose to display them in three different ways: either side-by-side (which works fine in this widescreen era), stacked on top of each other DS-style (which leaves large black borders on either side of the screen) or – our personal favourite – TATE mode, which lets you turn the Switch on its side and play with a vertically display.

This is all well and good but ultimately the reality is that Super Punch-Out!! is arguably the weakest game in the main series. There are fewer opponents than in any other Punch-Out!! (although you do get to fight them multiple times), their fighting styles are fairly basic and, most importantly, the controls here are noticeably more sluggish than they are in the NES, SNES and Wii entries.

We’re still so glad that it even exists on the eShop at all, because anyone into preservation and gaming history will clearly see the importance in keeping games like this alive. If you aren’t deeply devoted to the Punch-Out!! series, though, there are already two better instalments in Switch Online’s NES and SNES libraries.

Another key title in Nintendo’s arcade history making its way to the home for the first time, Super Punch-Out!! is more eminent than it is entertaining. It’s still a fun enough game for a while, but it’s probably the weakest in the series: play the SNES Super Punch-Out!! on Switch Online first, and only get this if you’re itching for more.