Hot on the heels of fellow Hasbro license G.I. Joe comes this turn-based tactical outing for those robots that take on the form of mack trucks, massive pistols, sheds and benches, the Transformers! Given the sheer love fans have for the series, Transformers: Battlegrounds has a lot to live up to – even more so when you consider the celebrated High Moon-developed shooters War For Cybertron and Fall Of Cybertron – and to its credit, it doesn’t even try, instead opting for what we have affectionately termed “Baby XCOM“.

This is not a passive-aggressive slight – in this writer’s opinion, if there’s one thing that tactics games tend not to be, it’s accessible. Transformers: Battlegrounds is very much the exception to this rule, and joyously so. It’s extremely easy to get your head around, with clear tutorials that don’t outstay their welcome, precisely-defined game logic and a clear, easy to understand HUD. And it pulls this off without entirely comprising the idea of having any tactical scope whatsoever, with things getting interesting just a few missions into the game. 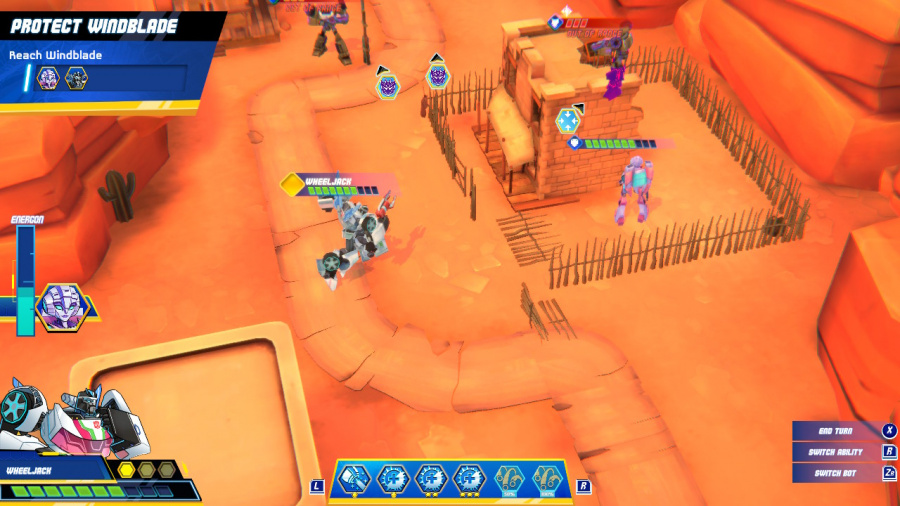 Taking control of the Autobots (and, in the main campaign, only the Autobots), you’ve got a selection of six ‘Formers at your disposal. A fresh-faced and cheerful Bumblebee is the first bot you’ll see, but he’s quickly joined by the likes of Windblade, Grimlock and – naturally – the legendary Optimus Prime himself. Each has their own special skills, with systems that are very easy to grasp. It’s your standard Action Points scenario, with movement and attacking all using them up in each turn. Your special powers can turn the tide of battle, but require more Action Points to use their more powerful variations. Windblade, for example, is able to knock enemies back, but can spend more AP in order to send them flying into the nearest solid object, doing heavy damage.

Alongside these special moves – easily accessed with the shoulder buttons – you also have a super-powerful “Ultimate” that’s only usable when your bot’s Energon metre is full. It’ll gradually creep up over time, but can be boosted by ending your turns early, sacrificing your remaining Action Points and converting them to Energon. It’s an easy-to-understand risk-reward system; do you use that last Action Point to get to cover, or give it up for for a guaranteed Ultimate on your next turn? What if the Decepticons have something up their sleeves, and there is no “next turn”? Do Decepticons even have sleeves? Only some of these questions are relevant. 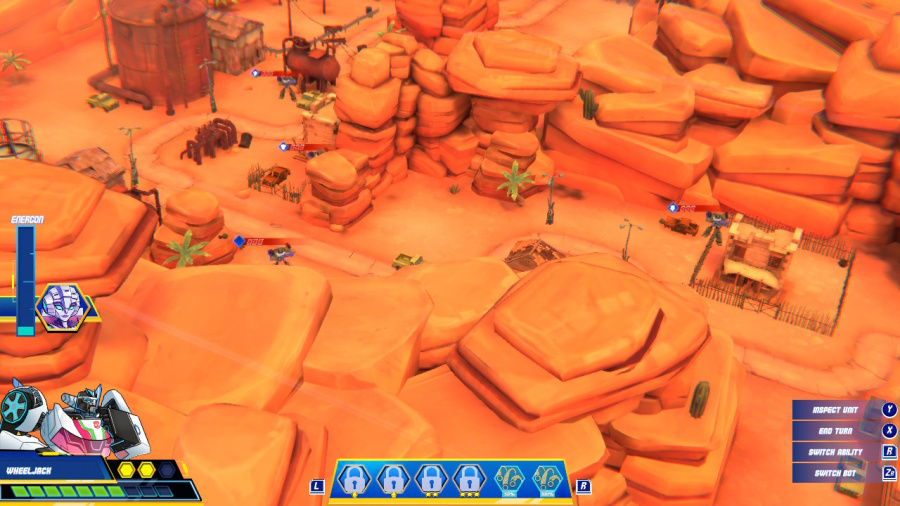 Missions vary from simple traversal to time-critical rescues and the strategy standard “kill everyone”. (Sorry, deactivate everyone. They can always be activated again, kids! Even that one with its head ripped off!) Yes, Transformers: Battlegrounds is pitched towards kids, but it’s admirably full-featured as strategy titles go, even bearing in mind its audience. Finishing missions grants Spark Points which can be spent on new abilities, opening up new tactics; all-out attack characters can become useful backup or support for your crew with the right equips. There is even a brace of extra modes with (local) multiplayer, including Capture the Flag, Grudge Match – which finally lets you play as the villains – and an endless Last Stand mode for those who like it when Autobots die. (The ’80s movie has a lot of fans, so the sadists are definitely out there.)

Aside from the fairly uninspired (but well performed) story, the concessions to a younger audience are fairly limited – there’s no worrying about accuracy, as your Autobots will hit their target as long as they’re in sight of it. This removes randomness from the equation, which in our view is a pretty good thing, if less true to the genre. The other hit the game takes, sadly, is to its challenge. While it’s involving and fun almost immediately, you’ll see the end within six or seven hours, and it’s only in the last few missions that you’re really in any danger of wiping out. This sucks, because this is a good game, and it wraps up right when you’ve finally got something to get your teeth into. 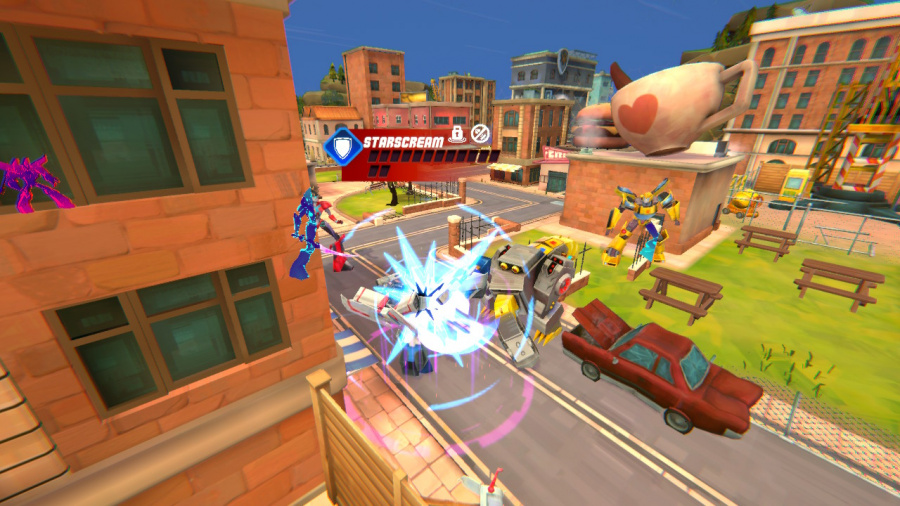 Aesthetically, it’s a bit of a mixed bag. The robots and world are nicely stylised – the destruction as you move your huge mecha around is a nice touch – but the lacklustre performance is a bit of a drag, seeming erratic even when targeting 30fps. The camera is also a bit of a pig at times, seeming to get stuck on the buildings if you deign to zoom in even a little. The models here don’t look bad, and it’d be nice to get a proper look at them, so this is a shame. As far as more crucial elements go, the presentation of the HUD is fine; nice, clear and perfectly readable even in handheld mode, and switching load-outs is a breeze. A decent Saturday morning cartoon-esque soundtrack complements the tactics well, but overall this doesn’t compare well with the non-Nintendo versions in terms of presentation.

Transformers: Battlegrounds is far from the disaster you may expect; it delivers a fun, accessible turn-based tactical experience which is sadly a little too easy. It might make a good game for someone new to the genre, or kids looking to get involved, but we’d wager that even children might find this one a little too simple. It’s a good effort and it does right by Cybertron’s finest, but there’s just not enough of it to justify the price. When it goes on sale, though, it’ll be time to (ahem) roll out.


Chris Metzen Is Back With Warchief Gaming