Do you love a properly hard challenge? Do you thrive in hostile and punishing game environments where constant death is an expected and necessary part of the cycle? Well then, Flying Oak Games’ ScourgeBringer might just be right up your street. Here we have a tough as nails roguelite that funnels its players through a never-ending succession of procedurally generated death chambers, forcing them not just to learn but to perfect its slick combat and movement mechanics, reacting with split second timing to enemy attacks and using the environment to their advantage in order to survive against all odds. There’s hints of Celeste in the tiny little murder rooms here, whispers of Dead Cells and Hyper Light Drifter in the sumptuously detailed graphical style and, if you’ve got the stomach for it, ScourgeBringer is equally as addictive and satisfying as any one of its most recognisable influences. 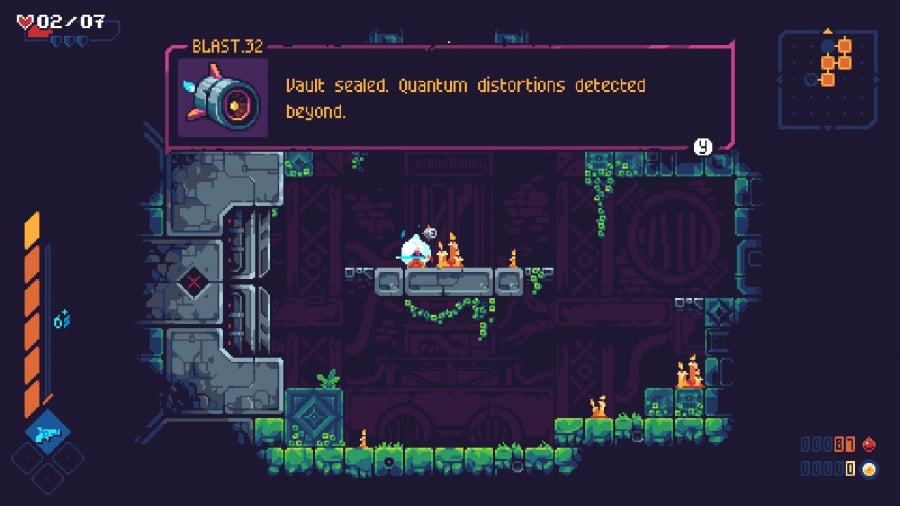 The world has been blasted to smouldering ruins by a mysterious structure that’s appeared in the sky, a monolithic alien artefact that has come to be known as the ScourgeBringer. An endless procession of brave warriors and explorers, survivors of the cataclysm, venture into its depths hoping to find answers but are never seen again. You assume the role of Khyra, the greatest of all warriors, now challenged with descending into the uncharted depths of the ScourgeBringer in order to end the planet’s torment and discover the truth behind the devastation that’s been wreaked upon your home.

As soon as you jump into the action here you’re immediately faced with a stiff challenge, there’s no time-wasting or hand-holding, if you want to survive you need to get a grip on your abilities ASAP. This is a game that’s all about constant quick movement and as such you’ll employ a nifty double-jump, chainable dash attack and the ability to wall climb and cling to your surroundings in order to attack a relentless barrage of enemies as ferociously as possible from all angles, rarely letting your feet touch the floor. Khyra has a straightforward sword attack to dish out damage complimented by a heavier slash that can temporarily stun foes, both of which charge her gun’s ammo meter as you take on enemies, enabling her to fire off a few precious rounds here and there in order to down a large foe or get herself out of a tight spot. It’s a small core set of abilites, for sure, but the speed at which you need to employ them here, the precision that’s required and the slickness with which they can be combined as you dance around the ScourgeBringer’s innards makes for an endlessly addictive and compelling challenge. 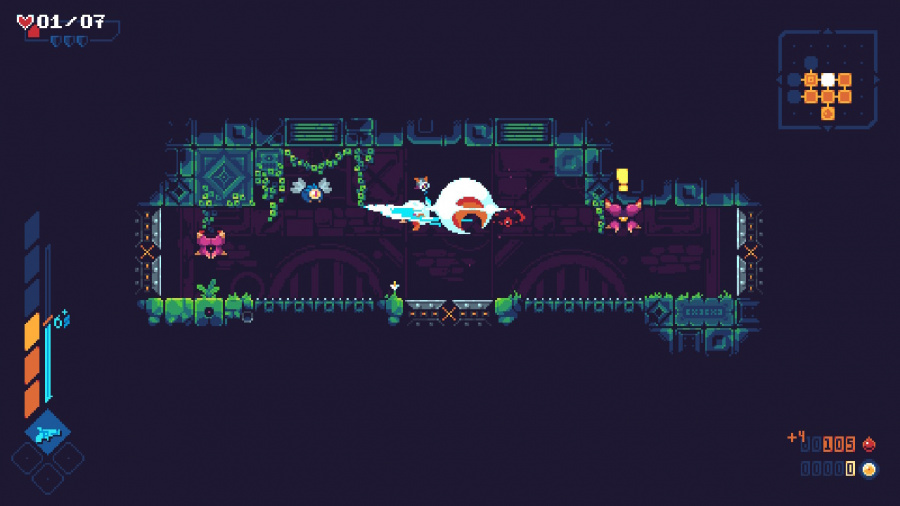 Levels here are made up of a succession of tiny little murder rooms, a handful of merchant areas where you can spend blood collected from foes to purchase temporary upgrades, and Altars of Blood where Khyra can choose blessings that gift her boons for the duration of a run. Bosses and minibosses, known here as Judges, drop Judge Blood which you retain when you die and can spend in the game’s hub area in order to permanently upgrade aspects of your core stats or unlock new abilities and attacks. All of this, combined with random weapon and perk drops that occur as you kill enemies and fully explore levels, provides a satisfying and constant sense of progression in the face of ScourgeBringer’s unending procession of death.

As you slowly level up using Judge Blood, Khyra’s slash attack attains the ability to deflect enemy bullets back where they came from and to knock foes into each other causing group damage. You’ll unlock a devastating Fury attack that locks on to multiple foes before dishing out a ton of damage, a ground pound, dragon punch and stronger combos for your base sword attack. Your health bar, which is almost pitifully small starting out will gradually get bigger, you’ll earn fast travel and the ability to stun enemies for longer periods of time, but even then you’ll never really feel like you’re on any less of a knife-edge as ScourgeBringer continues to up the ante. 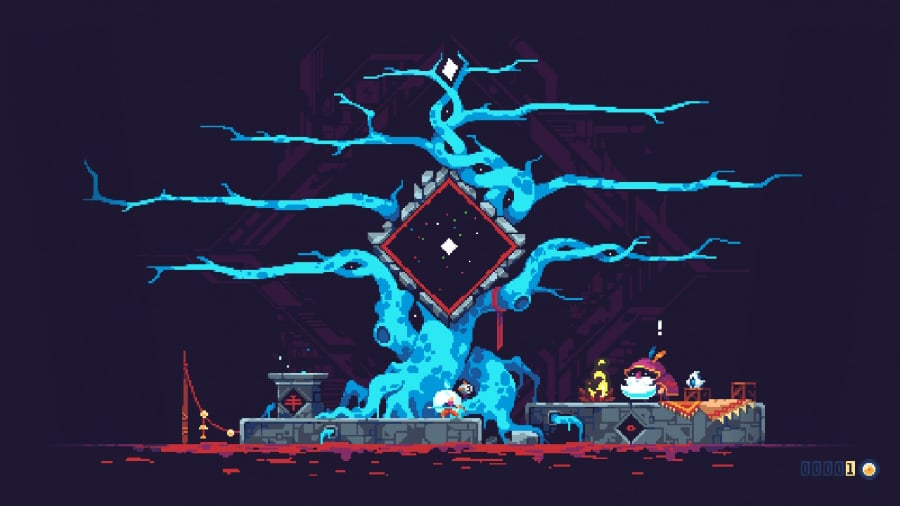 It took us a good few hours of constant repetition to best the first area here, finally defeating its miniboss and ludicrously tough end boss and moving onto the next realm where we died almost instantly. Of course death returns you right back to the beginning of your adventure and not only are you then faced with running the gauntlet you just spent hours beating once more, but the game has now added all manner of new beasties, miniboss fights and challenge rooms into the mix. It’s almost overwhelming and would certainly be grounds for jacking the whole thing in if it wasn’t for the fact that this game’s combat is so marvellously slick and addictive.

Khyra dances through these battles delightfully, effortlessly stringing together attacks, dashes, dodges and wall jumps as she blasts her enemies into satisfying little droplets of blood. The game’s music too, a frenzied combination of electro and heavy guitar riffs, only kicks in when you attack an enemy and stops suddenly when you take a hit, it’s a small touch but one that has a massive impact on the action, adding a ton of drama to each and every onslaught. Graphically, as we mentioned, there’s more than a passing resemblance to Dead Cells, Celeste and even Hyper Light Drifter here, a wonderfully atmospheric pixel style that’s got a ton of little incidental details to enjoy as you swoop and dash deliriously around the six realms that make up the fiendishly difficult maze at the heart of the ScourgeBringer. It all runs absolutely flawlessly too — this one’s been in Early Access on PC for some time and it shows. In both docked and handheld modes, no matter how much carnage is happening onscreen, the action remains perfectly smooth. 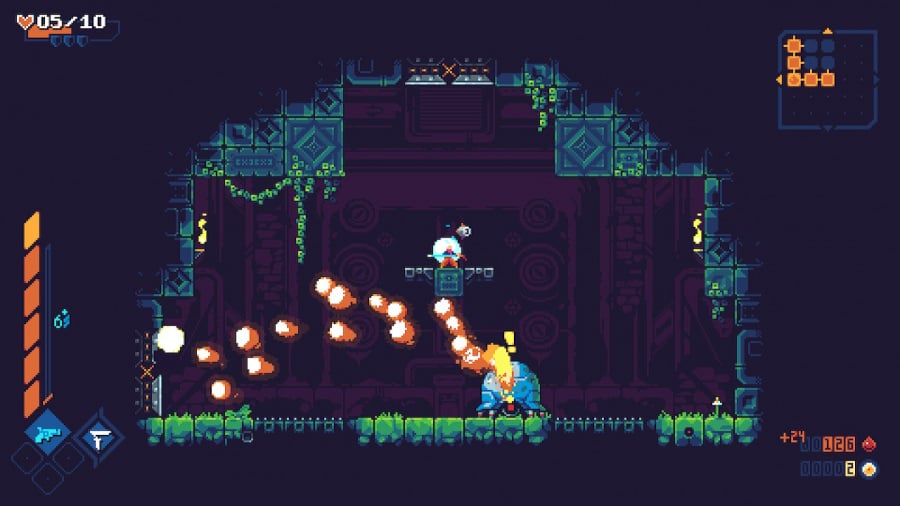 Flying Oak Games has also, quite mercifully, made concessions here and there with regards to difficulty should you need help. Jumping into the accessibility settings menu presents you with the option to turn the game’s speed right down (or even up by 50% if you’re mad for it) as well as the ability to slow down enemy bullet speed and change the rate of HP regen between normal, extra HP drops and total invulnerability. Invulnerability! It was the only way we were able to see a lot of what this one’s got to offer in time for this review as it’s so mercilessly tough and, aside from being a useful option for non-hardened roguelite runners, it’s also a great tool for practicing against enemy types in later areas without the threat of having to re-run the entire thing looming over you.

ScourgeBringer is a tough, tough game, a wonderfully pure experience that’s laser-focused on providing a properly stiff but satisfying and rewarding challenge. It’s not going to be everyone’s cup of tea, if you find yourself getting frustrated by the constant repetition and death that’s an inherent part of the roguelite genre, you’re going to have a real hard time here. However, if you’re down for the challenge you’ll find a slick and addictive action title that provides hours upon hours of tight combat wrapped in a wonderfully atmospheric little package.

ScourgeBringer is a wonderfully slick and addictive roguelite adventure that flings its players headlong into non-stop frenetic combat and never lets up. This is an unapologetically tough game and if you struggle with the constant repetition and death inherent in the roguelite genre you may find it all a little hard to put up with. However, if you’re not put off by a challenge, or if you’re a Celeste or Dead Cells fan who is craving more, what Flying Oak Games has conjured up with this one is sure to absolutely delight.

Nintendo Announces Huge Cyber Deals Sale For Europe, Up To 75% Off Top Games