SaGa Frontier, Square Enix’s idiosyncratic JRPG classic, arrives on Nintendo Switch in a lovingly crafted remaster that gives long-time fans plenty to get excited about whilst fully retaining the ability to absolutely infuriate and bewilder anyone who isn’t au fait with its many, many eccentricities. This is a twenty-six-year-old game that’s still worth experiencing, and one that benefits greatly from the additions made in this upgraded version, but it’s also one that you’ll need to prepare to work hard at in order to enjoy, especially if this is your first trip around The Regions.

First things first, though — and on the most positive of notes — this really is a properly excellent remaster and an absolute gift for hardcore SaGa series fans. It introduces a bunch of neat quality of life improvements, restores lots of cut content, polishes character models to a high resolution sheen, adds pointers to help with level traversal and even throws in a New Game+ mode and brand new quest log system that makes it far, far easier to keep track of what you’re up to as you blast through the eight character storylines on offer. 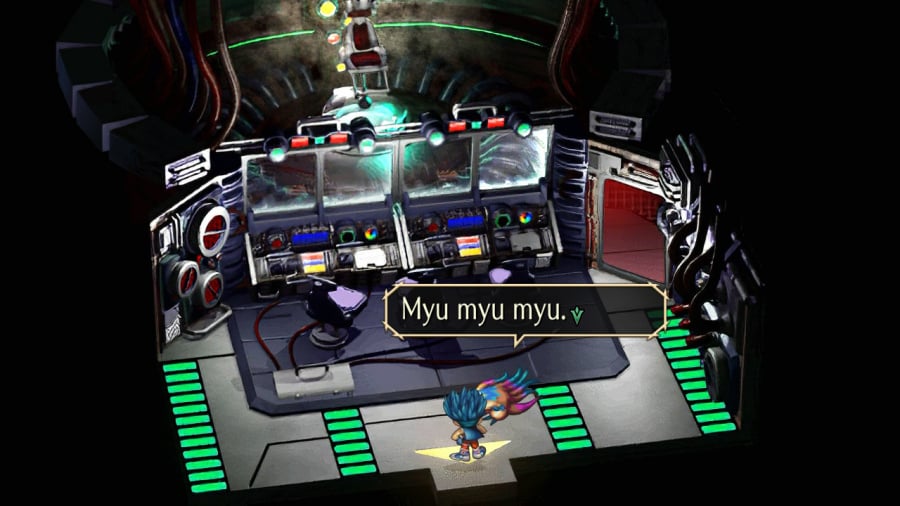 Starting out in SaGa Frontier Remastered, you’ll initially choose from the same seven character campaigns that were available in the original version of the game – with the option to play as previously cut character Fuse unlocked once you complete any one of these narrative strands – and the effort that’s been put into revitalising this age-old experience is immediately apparent. Player characters and enemies look delightful here, crisp, colourful and bursting with previously unseen detail, and the many, many pre-rendered backdrops don’t seem to have aged a day. There’s double and triple speed boosts available at the touch of a button to help you bound around levels or battle through fights as quickly as you’d like, and you can easily save at any time by simply holding ‘X’ and hitting ‘ZR’ (something we’d advise you do as often as you possibly can). In short, if you were already a fan, if you’re someone who has played through this one countless times before, you’ve got plenty to look forward to with this remastered release and should immediately add two points to the score below and go make that purchase.

However, if you’re coming at this one as a first-timer, things are quite a bit more complicated. There’s no getting around the fact that this is a nightmare of a game in many respects; a real oddball curio of a thing that really does not want to hold your hand, explain itself at all or help you out in any way whatsoever.

We started out playing as Red, perhaps the most straightforward of the eight available characters — and the one that is most often recommended to newbies — and even then it wasn’t too long before we were racing off to the internet for help with the game’s battle system, often unfathomable level progression, abrupt difficulty spikes and so on. If you’re willing to spend the time learning (most often from external sources and guides as the game hasn’t got your back in this regard) and slowly getting to grips with this stuff, there’s absolutely plenty of fun to be had here, but be warned that this one will test your patience to breaking point before you arrive at a place of even vague understanding or comfort. 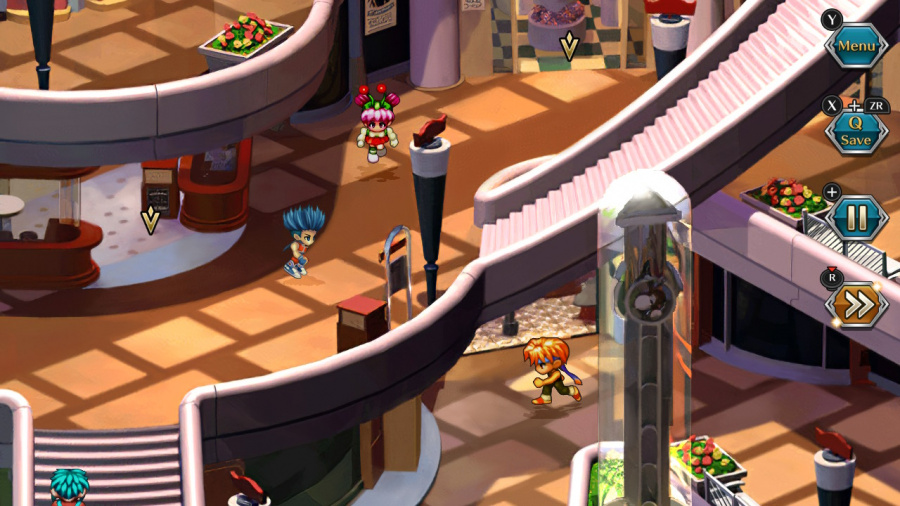 Just making your way through levels or completing tasks here, even early ones, can be an exasperating affair with finnicky, exacting ways to do things that aren’t in any way hinted at but must be completed just so in order for events to progress. Almost immediately in Red’s storyline, for example, you’re asked to enter a building in order to confront members of BlackX, the evil syndicate that murdered your father. However, as with almost everything here, this task is not at all straightforward or intuitive. You’ll need to find and approach the thugs in question, interact with just the right one of them in order to send them running off and then get yourself to the building’s parking garage in order to initiate a battle that sees the mission completed. There’s no way of knowing the order in which any of this needs to play out and so you can — and we did — spend an absolute age just milling around this early level trying to figure out what on earth you’re meant to do next.

It’s easy to miss out on chunks of the experience too, missions can end abruptly without giving you time to explore areas if you happen to accidentally go to the wrong place first or unwittingly set the ball rolling on a final boss encounter. ‘Soft locks’ are a common occurrence as you get yourself trapped with no other course of action available other that to restart because you’ve made the wrong choice, missed out on recruiting some party member or other, and so on.

The battle system, easily the best part of the game for us, also doesn’t play ball when it comes to helping you understand its many archaic complexities. There’s some excellent combat in SaGa Frontier Remastered, there’s no doubt about it. We love how your skills and attacks are added to and evolved by simply using them repeatedly and there’s real depth on offer in the many items, spells, combination attacks and so on that are available to your party, but you best be ready to settle in and suffer if you’re a newcomer; have Google handy and prepare to be battered and bruised repeatedly before you begin to get your head around the many moving parts that make up the action here. You’ll find yourself absolutely at a loss as to how to deal with many of the boss battles laid before you as tried and tested techniques and combos you’ve come to depend on do next to nothing when the game decides, without any warning, that it’s time to turn up the heat. There’s an infuriating lack of even the most basic explanation, and yet this game does remain somewhat compelling; it draws you back in and keeps you interested because, well, because it’s absolutely bananas. 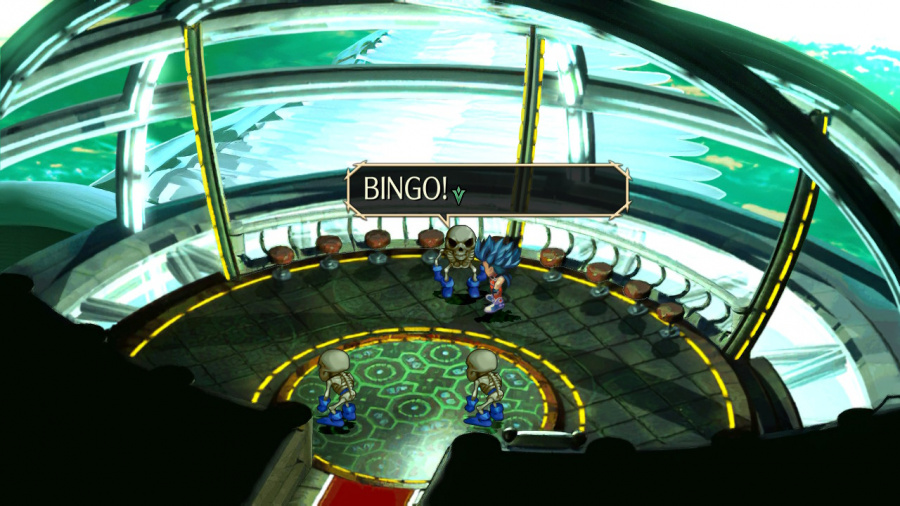 The eight campaigns here, how they intertwine and cross paths with one another, the constantly shifting styles of area that you’re treated to as you venture around The Regions, Kenji Ito’s superlative soundtrack, the depth of that combat, the enormous parties you can gather to battle bad guys… there’s lots to enjoy here if you can stick with it, if you can commit to slowly making your way through it, restarting ad nauseum when you mess up and hitting forums and wikis to get to grips with stuff you can’t get your head around.

The level of freedom you’re afforded too, for a game of this vintage, is still really impressive. There’s no doubt this one was breaking new ground back in 1997 with how it abandons the expected linearity of JRPGs of its day in order to present players with such choice in how they experience its world. If only it wasn’t so bloody stubborn — if only it made its systems more transparent and offered more in the way of guidance as to how it expects you to overcome its challenges, tasks and battles — it would be a much easier game to recommend getting involved with.

As things stand, SaGa Frontier Remastered on Switch is an impressive revamp of a cult classic JRPG that long-time fans should absolutely dive right into; this is the game you know and love looking and playing better than it ever has. Curious newcomers, however, should be more than a little wary of an experience that will absolutely frustrate and confound as much as it will provide nuggets of enjoyment.

SaGa Frontier Remastered sees Square Enix’s cult classic JRPG looking and playing better than ever, with a lovely HD lick of paint and lots of restored content and quality of life improvements providing hardcore fans with an experience they’ll doubtless enjoy. However, this is still a game that’s aged quite poorly in many respects; an idiosyncratic, eccentric and infuriating experience that refuses to guide you or help you in any way, and one that, in the end, is quite hard to recommend to anyone who isn’t already a fan.

Cave’s DoDonPachi Is Coming To Switch, But It’s Not The One You Want