A lot of people may not realise this, but HAL Laboratory isn’t actually owned by Nintendo. It may have been responsible for the likes of the Kirby, Smash Bros and Mother series and its main office may even be located in Nintendo’s Tokyo building, but the developer remains independent and could make games for other platforms if it ever chose to.

It exercised this right back in late 2017 when it released a mobile game called Part Time UFO. It was a delightful, addictive and thoroughly entertaining game from start to finish with no microtransactions, no ads, none of that nonsense – and it had absolutely nothing to do with Nintendo. Except now, because a few years after its mobile launch it’s been ported to the Switch. The good news? It’s even better. The bad news? Your free time is about to take a serious nosedive.

You play as Jobski, a little sentient UFO who finds itself on Earth looking for work. After it helps a farmer load some crates onto the back of a truck, the farmer gives it a magazine with a bunch of part-time job ads in it. These form the game’s stages, and it’s up to Jobski to take on each of the jobs and carry out the tasks required in each one. Conveniently, all of the jobs available take advantage of Jobski’s unique skill: the ability to lower a large claw that can grab onto things. 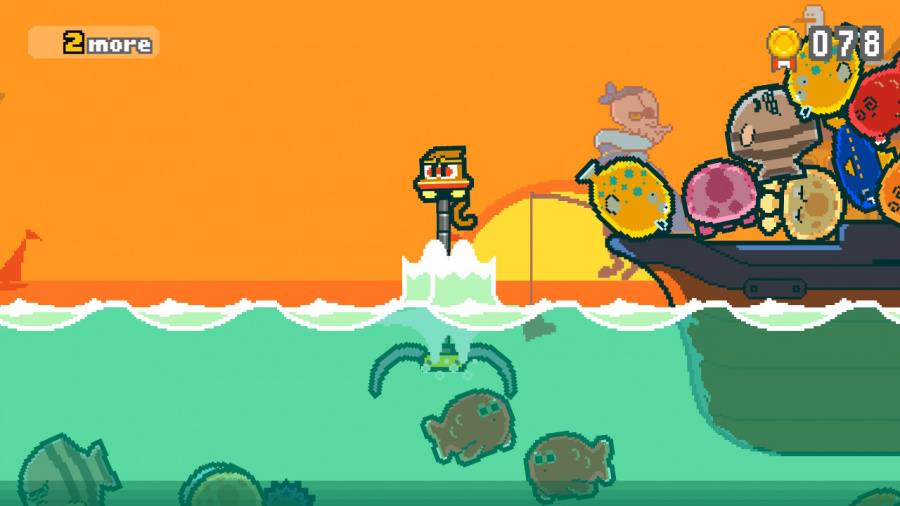 This means Jobski is essentially a hovering, self-aware crane game, albeit one that’s designed to actually pick things up relatively easily. Press the game’s single action button and the claw descends, opening wide enough to be able to grab fairly big objects if need be. The grip is also tight enough to ensure that you won’t drop anything unless you’ve lined it up sloppily, in which case you frankly don’t deserve to cleanly carry the thing. After carrying the object to where you want it to go, pressing the button a second time will quickly release the claw, dropping the object.

Naturally, everything is physics-based, leading to a sort of cross between the brilliant Nintendo Badge Arcade app on the 3DS and something like World of Goo, the latter comparison especially coming into play when stages get more elaborate and you find yourself trying to stack multiple objects on top of each other or trying to place them on a seesaw-like area where you have to make sure weight is distributed evenly.

Each stage has a different theme and its own central task; this could involve putting together a cheerleader pyramid at a school gym, reassembling an ancient piece of artwork at a museum or stacking a bunch of animals on top of a precariously wobbly tightrope-walking elephant at a circus. Every level is packed with humour and there are lots of fun little details in the backgrounds, and it’s all accompanied by one of the most delightfully twee soundtracks you’ll hear, which mainly consists of a single cheery theme played in a variety of different ways. 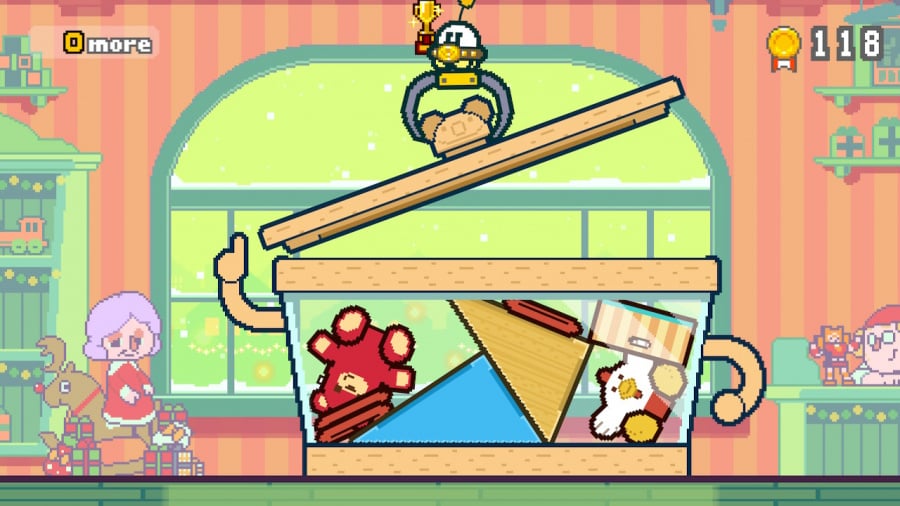 Completing the main task is one thing, but each level also has three secondary tasks that require you to do more than just the bare minimum. Generally speaking, one of these usually involves beating the stage in a set time, while another rewards you for clearing the stage properly: stacking boxes the right way up, stacking the cheerleaders efficiently enough so that the pyramid reaches a certain height, that sort of thing. The third, meanwhile, is a bit of a wild card and tends to be completely different for each stage: it could involve plucking a hidden character out of the background and placing them on the stack, making sure certain objects are placed on specific places, or what have you.

Although you aren’t explicitly told what these three extra tasks are, each is represented by an icon that gives you a clue and they can all more or less be figured out easily based on that (the challenge is in actually pulling it off, of course). Beat a stage and you’ll also unlock a harder version of it, where the main task is made more complicated. That big stone temple you had to build before is now made out of eight pieces instead of six, for example, and it’s less clear which pieces should go where (though the joy of this game is that there are always multiple solutions).

What’s the point of doing all this? Why, to make money of course. Money that can be spent in the game’s clothes shop on a variety of different outfits, each with their own different properties. Dress Jobski up as a monkey, for example, and objects will swing less as you move around, while putting a safety helmet on its head will let it safely stop quicker, and dressing it up as an astronaut makes the claw drop quicker. 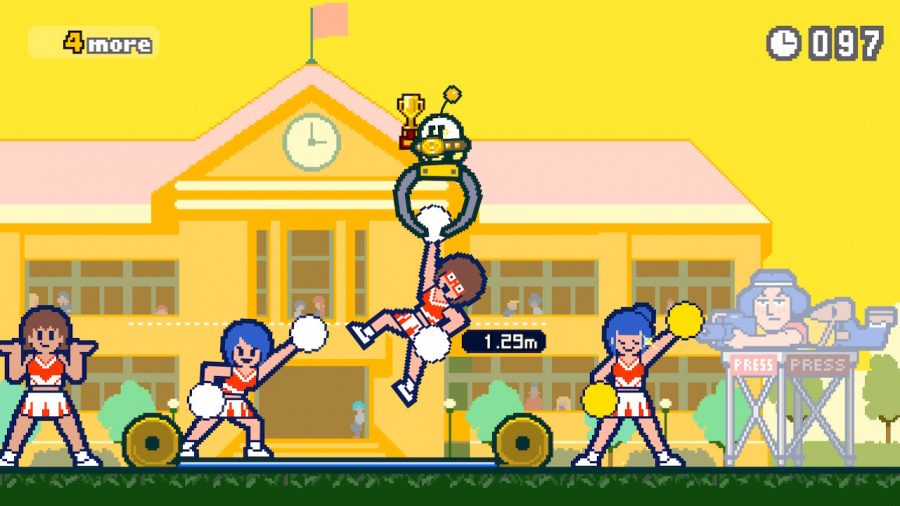 Fans of the mobile version will already know all this and will be curious to know what’s new here. A decent amount, actually. The main game itself has one or two new levels, such as a new Toy Shop stage where you have to stack toys into a big box well enough that you can cleanly put the lid back on when you’re done. There’s also a new Feats of Glory screen, which is essentially an achievement system with 48 achievements to earn, giving you funny little animations as you rack them up. And there are a few new outfits too, though that would be spoiling things.

Meanwhile, the new Tower of Infinity mode will be your new obsession; you’re given a randomly-chosen series of objects and have to stack them as high as possible, while every now and then you’re awarded a special block, which can be placed on the screen to help prevent your tower toppling. We’re scared to think how long we’re going to spend on this mode alone. Beating the game will also unlock a new Treasure Island mode, which gives you a meatier adventure that goes beyond simple single-screen tasks and has you exploring a large, multi-roomed environment full of surprises.

Best of all, the entire game can now be played in co-op, with two Jobskis on the screen at the same time. The simplicity of the game’s controls means this is the perfect co-op game because even players who aren’t the most experienced gamers will be able to pick it up (ahem) quite quickly. It’s taken a few years but we finally have a simple and entertaining Switch co-op game that has toppled Snipperclips from its throne. 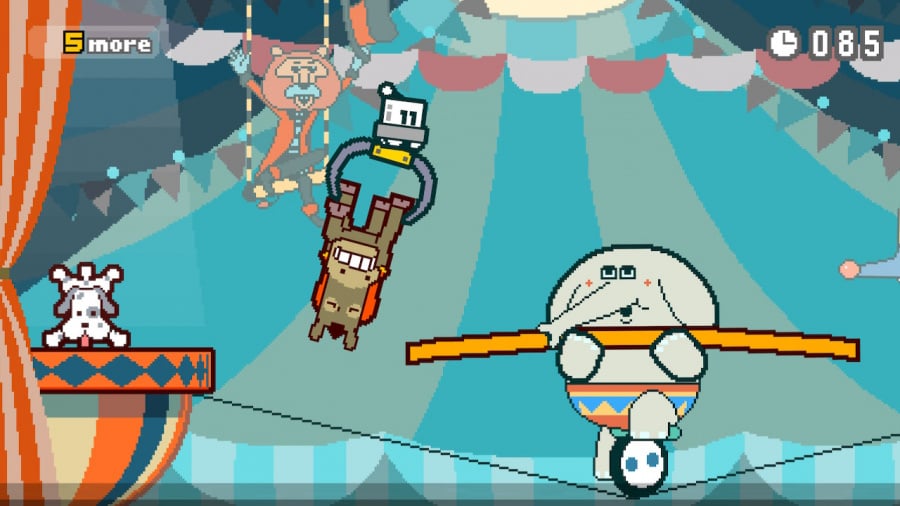 We love this game and can’t stop playing it. It’s more expensive than the mobile version (£8.09 / $8.99 versus £3.99 / $3.99) but all the extra modes and features absolutely make it worth the money, not to mention the fact that it’s far more comfortable to play with an analogue stick and buttons (well, one button) instead of a phone’s touchscreen. It may not have initially been made with any involvement from Nintendo, but HAL’s close links with the company shine through regardless and as a result, it absolutely feels like the sort of premium product you’d usually only expect from one of Nintendo’s own development teams. This is a must-have.

The mobile version of Part Time UFO already had the charm of a Kirby game, the physics-based chaos of World of Goo and the compelling claw machine mechanics of Nintendo Badge Arcade. This new Switch port builds on top of that already impressive stack by adding a co-op mode that betters Snipperclips and chucks in an infinite mode that provides the sort of quick-fix joy that hasn’t been seen since Paper Plane on DSiWare. It may be a game about picking things up, but the real challenge will come when you try to put it down.