You know you’re in for a rough time when a game tells you upfront that you’re going to lose a lot. One of the first things you see in Othercide – the latest release from Lightbulb Crew – is one such message, which plainly says, “your Daughters will die, and you will lose, only to rise stronger again.” Indeed, Othercide lives up to the hype, too; this is not a game for the faint of heart. That being said, those of you who put in the effort to overcome Othercide’s punishment will find that this is a richly rewarding and thoroughly enjoyable SRPG adventure that stands tall among its peers.

Right from the off, it’s clear that Othercide borrows heavily from the weighty, hopeless atmosphere of Lovecraftian literature, as you fight a losing battle against… something. The story roughly follows a mysterious extradimensional being named the Red Mother, who’s locked in an endless battle against a sinister force called Suffering. Suffering is a creature from beyond the Veil that evidently wants to destroy all life, and it very frequently manages to have its way with the world. However, the Red Mother has the ability to reset the world to a time decades before Suffering’s victory, and she does this over and over, each time picking new warriors called Daughters who utilize the memories she gains from the infinite lost battles to better combat their opponent the next time around. 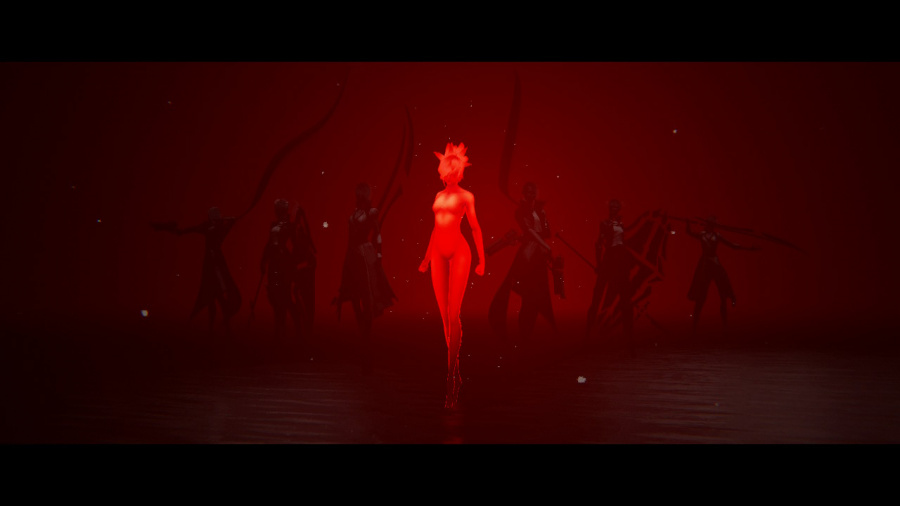 It’s a legitimately fascinating premise to be sure, although it can be rather difficult to parse at times. There’s no straightforward narrative here; cutscenes are often shown with little to no context for what they can mean, and you’re instead pushed to piece together what’s going on by snippets of lore that are drip-fed to you through descriptions and loading screen blurbs. In this regard, the story proves to be less of a traditional A-to-B narrative than it is a ‘mosaic’, wherein it’s up to you to arrange the pieces. Perhaps there’s a ‘correct’ narrative, or maybe it’s really meant to be an abstract thing that is only what you make of it. Either way, it hits all the right beats for keeping you interested in what new details may come next, and suitably sets up a heavy, depressing atmosphere to go along with the gameplay.

Those of you who have played XCOM or Mario + Rabbids: Kingdom Battle will know what to expect here. Each battle you participate in sees you taking three to four Daughters into a grid-based arena, where you have to either kill everything else that moves or escort an NPC across the battlefield relatively unscathed. Turns are not necessarily limited to a binary state of your team vs the enemy team, however. Instead, each unit is governed by a shared timeline on the bottom of the screen that dictates the order of what happens in the fight. When a unit takes an action of any sort, it costs them a few ticks on the timeline, and whoever is farthest left on the timeline gets to act next. Upon executing their actions, the unit is then moved however many ticks to the right of the timeline, and slowly make their way back over again. 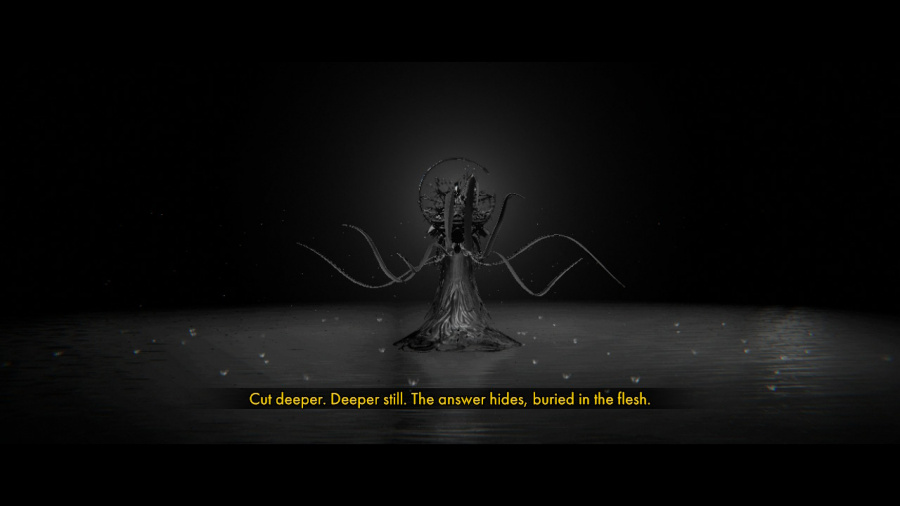 What’s interesting about this setup is how flexible it can allow turns to be, adding in a nice additional layer of strategy. For example, each Daughter is limited by a soft cap of fifty ticks on the timeline, but they can each use up to the full one hundred ticks of the timeline if they wish. Going anywhere over fifty will automatically push them all the way to the end of the timeline, however, which leaves them wide open to counterattacks from enemies, who could potentially get in two turns before that daughter gets to act again.

Thus, you have to constantly be balancing the risk of taking your next turn’s actions against the potential blowback that can incur. Do you hedge your bets and take the extra turn to finish off that enemy with a sliver of health, or do you play it safe so you can respond quickly to an attack from another enemy elsewhere on the battlefield? Like all great strategy games, there are no clear right or wrong answers, which makes every choice feel that much more impactful.

Later on in Othercide, actions can be taken to faff about with the timeline, too, to better sway things in your favour. For example, some attacks can push an opponent back thirty ticks on the timeline, and if you use this at the right time, that can allow another Daughter to act before that enemy gets their turn. Then there are ‘delayed actions’ that will take a certain number of ticks after the Daughter’s turn to trigger, and these usually result in some powerful moves. The tradeoff, however, is that an enemy could potentially cast an action that lets them jump forward in the timeline and attack her before she gets to do the move. All of this is to say, the whole mechanic of the timeline makes for some wonderfully dynamic fights that keep you on your toes, as opposed to the relatively safe methods used in traditional SRPGs wherein all of one team gets to act before the other can respond. 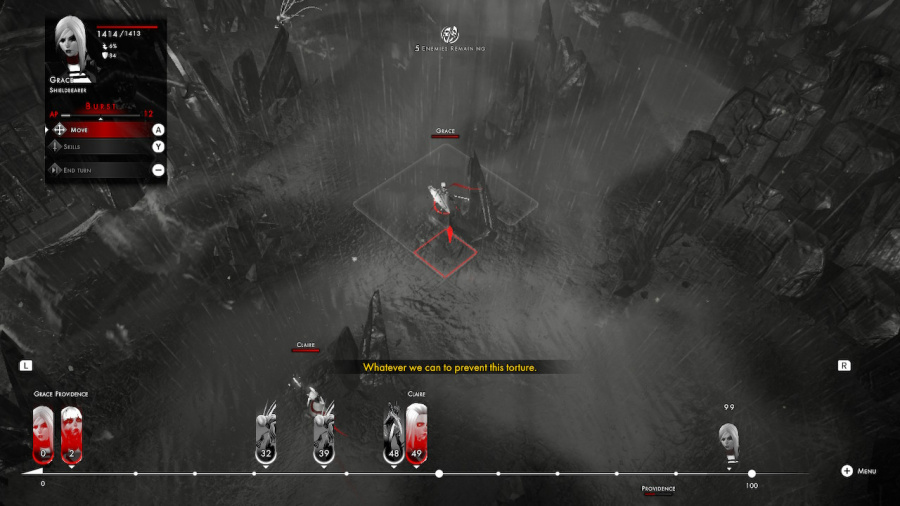 Amid all this, RNG proves to be the real devil of the difficulty, as it consistently ruins your best-laid plans and keeps you improvising along the way. A Daughter may have enough DPS to off an enemy, but then she’ll miss two of her attacks. In this situation, you then have to decide whether it’s worth it to spend the extra timeline ticks to try again or to just accept your failure and hope she doesn’t get too ravaged by that enemy when they can act next. The key issue at the heart of this, however, is that there’s no conventional way to heal your Daughters. Yes, you read that right – every hit against a Daughter will especially sting because it’ll persist not just for the rest of that fight, but for the rest of her unfortunately short life.

The only way to get around this is to utilize the Sacrifice mechanic, which is little better than just letting the Daughter bleed. In between battles, you can opt to use another Daughter at an equal or greater level, and kill her so the other one can heal up a bit and get some extra stat boosts in the process. Bearing this in mind, you need to be really sure that you want a wounded Daughter to be in top fighting shape for the next battle, as the cost of it will be having to enter that fight with one less warrior on your already small team. The flipside to this, however, is that dead Daughters don’t necessarily have to stay dead. You can spend a rare currency to resurrect any dead Daughters from the graveyard, but this is something you can only do a few times total during a run. Once again, you need to think hard about who’s worth bringing back and who you should let sleep in their eternal rest, as a decision like that can potentially sink a run if you do it wrong. 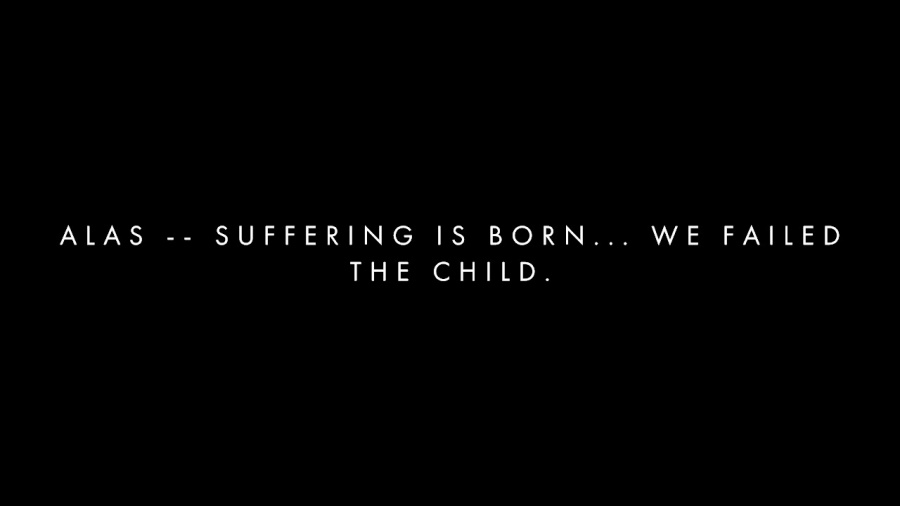 Othercide is broken up into a series of Eras, which all take place over the course of an in-game week. At the end of this week, you have to fight the boss of that Era, who will usually steamroll over your pathetic team with laughable ease. On each day of that week, you can choose to either fight the boss right away, or you can instead choose to participate in an ordinary battle to gain more XP and hopefully not damage your delicate team too much. It’s a given that you probably won’t be able to train up your Daughters enough to actually challenge the boss for your first (or even your fifth) run, but each battle nonetheless still provides some critical progress for your team. For one thing, you can resurrect Daughters from previous runs to further grind up their levels and maybe unlock some new abilities, gradually bringing them up to snuff. More importantly, you’ll continuously be unlocking new “Remembrances” which will boost you up for future runs.

The Remembrances run the gamut from giving you more currency to resurrect Daughters to allowing you to skip whole boss fights once you’ve cleared them once, and they all go a long way towards making the game considerably more bearable. Remembrances are regularly unlocked via basic play, too, such as hitting a certain threshold of total damage dealt to enemies, so you’re guaranteed to always be making some movement forward even if your Daughters are repeatedly breaking themselves against the immovable wall of a boss. This mechanic proves to be critical in keeping one engaged in Othercide, then, as even repeated losing feels like winning in a twisted and roundabout fashion. There’s no real consequence for continued losses other than lost time and having to start a run over with a fresh team, so on a long enough timeline, persistence inevitably leads to you overcoming even the toughest challenges Othercide has to offer. 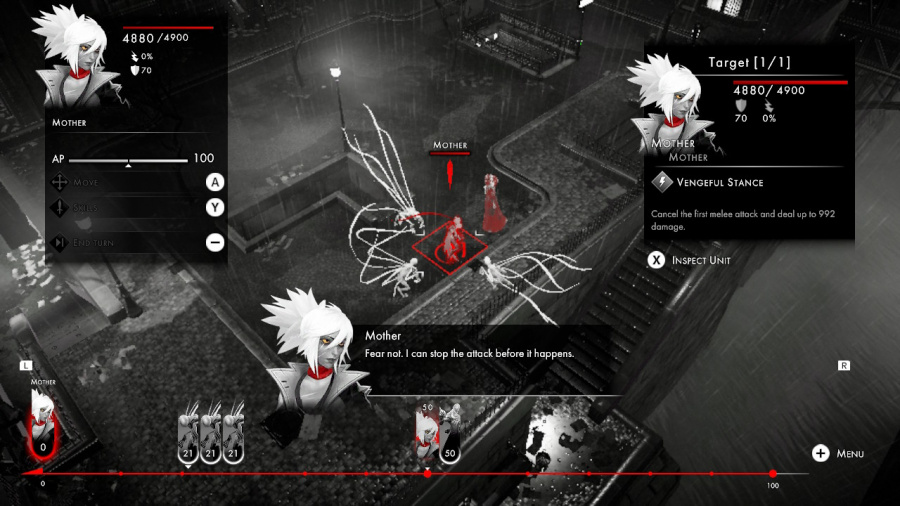 It’s impossible to talk about Othercide without taking some time to discuss that rather unique art style it employs, which fits perfectly with the dark themes of the rest of the game. Pretty much everything in Othercide is cast in varying shades of black and white, with the two notable exceptions to this being the crimson red that colours your girls’ scarves (or the buckets of blood they shed) and the creepy bright yellow colouration of their wide eyes. Some may find this to be a bit boring visually, but the long shadows and constant downpour of rain over these monochromatic landscapes make for a palpable tone to say the least, and that’s not even considering the various Lovecraftian beasts and witch doctors that your girls constantly battle. All of this is accompanied by a soundtrack that’s quite understated and moody, with deep, looming notes presiding over the gory action of the conflicts you endure. All of this is to say, Othercide executes some remarkably refreshing and well-made presentation, which helps it to stand out better from other SRPGs available on the eShop today.

Before closing out this review, we feel it bears mentioning that Othercide unfortunately struggles with some performance issues on the Switch, and these do drag down the experience somewhat. Animations in conflicts are often played at a sluggish framerate and there can be many instances where the cursor doesn’t feel like it’s properly responding to your basic inputs. Now, to be fair, these issues are less of a problem in an SRPG, which moves forward at a slow and calculated pace anyway. Even so, the relatively simplistic models and environments hardly seem like they should be particularly taxing on the Switch’s hardware, which can make the game feel cheaply made in some places. Perhaps such issues will be addressed in a future patch, but as of the time of writing, just be aware that Othercide is rarely a buttery smooth experience.

Party-Based RPG Battle Hunters Pushed Back To November On Switch

Truck Driver Sets Course For A November Release On Switch