Is It Wrong To Try To Pick Up Girls In A Dungeon? – ﻿Infinite Combate Review (Switch)

90
0
by uJRMhoSi3X
In Nintendo Life

Rather than being a conventional “isekai” narrative, in which a character from our world is brought to another and has to learn to live by its often game-like rules, in Is It Wrong to Try to Pick Up Girls in a Dungeon? we’re simply presented with an alternate existence in which conventions we recognise from role-playing games are a normal part of daily life. After the pantheon of Greek- and Norse-inspired gods descended to the human world to alleviate their boredom, they conferred their blessings on individuals to bring them into their “familia”, and those blessed in such a way were able to become adventurers, growing stronger through their own experiences and the blessing of their patron deity. 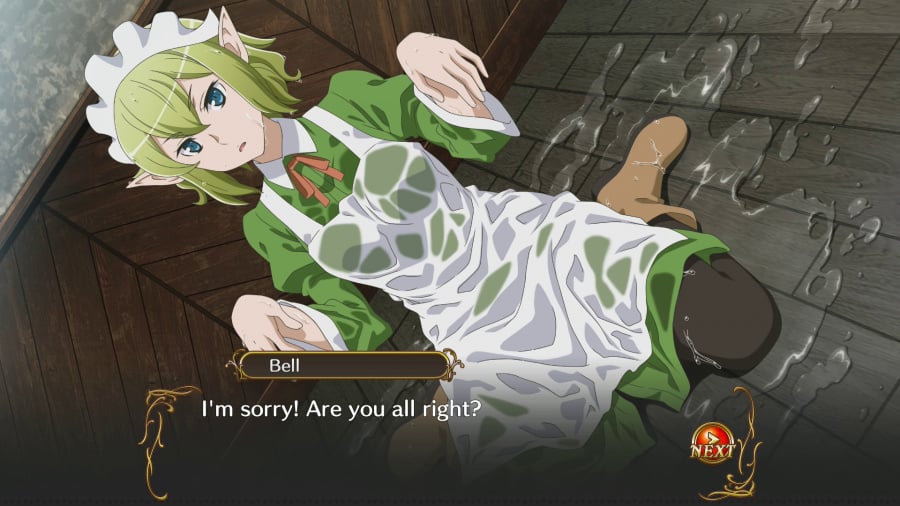 Is It Wrong to Try to Pick Up Girls in a Dungeon? – Infinite Combate follows the lives of two adventurers at very different ends of the spectrum. Bell Cranel is a rookie adventurer and the only member of the Hestia Familia, while “sword princess” Ais Wallenstein is an experienced, powerful warrior, renowned for her skills as much as for her beauty. For those familiar with the source material, the story of the game follows the Bell-centric first season of the anime, with some elements from the spin-off series Sword Oratoria to show some events from Ais’ perspective. For those unfamiliar, the fact this game follows the beginning of the overall story makes it a good introduction.

The game unfolds as a combination of visual novel and dungeon-crawling action-RPG, with chapters alternating between Bell and Ais until halfway through the game, at which point the focus shifts exclusively to Bell. The visual novel scenes are well-presented, with good voice acting from the original Japanese cast, some beautiful event scenes and attractive character art — though the lack of animation beyond mouth movements and blinking is a little disappointing. Surprising, too; given the enduring popularity of Is It Wrong to Try to Pick Up Girls in a Dungeon over the years, it seems a little odd that Mages were clearly working with a shoestring budget that couldn’t stretch to a bit of Live2D animation or equivalent. Perhaps all the money went to the voice actors. 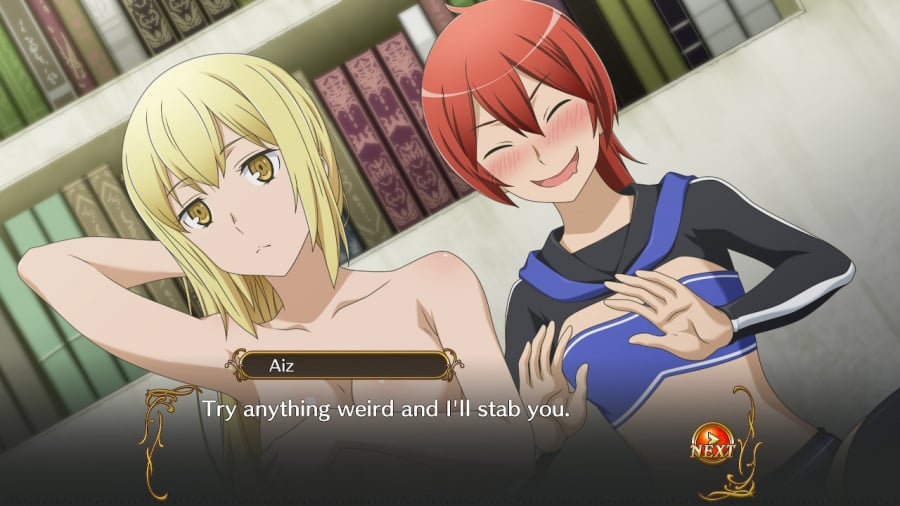 The localisation is decent for the most part — Japanese honorifics are even kept intact, since there are a number of scenes that deal with the social conventions surrounding forms of address. There are a few issues here and there, though: very occasional lines with slightly odd (presumably machine-translated) phrasing, a couple of typos and quite a few instances of words with apostrophes in the middle wrapping from one line to the next. Given the sheer amount of dialogue in the game, a certain amount of these problems can perhaps be forgiven — though again, given the worldwide popularity of the series, it would have been nice to see a little more care taken in this regard.

The action-RPG segment of the game initially seems fairly simplistic, consisting of two attack buttons and a quick dodge. Later in the game, you also get access to ranged magic attacks and cooldown-based “smartbomb”-esque skills corresponding to your “supporter” party members. As you progress and come up against tougher foes, you’ll realise there’s a strong emphasis on managing space and crowd control, and a deliberate pause that leaves you open to attack after executing a full combo means you can’t just mash buttons and hope for the best.

If anything, given the game’s lack of grinding for experience points, the actual combat sequences feel more akin to a top-down beat ‘em up than a traditional action-RPG, especially given the prevalence of elements such as hitstun and the very active, arcade-y feel to battle. Enemy attacks can often be interrupted with a well-timed strike, for example, and it’s important to understand different enemies’ visible and audible cues to successfully dodge attacks, particularly in boss fights. Once you get a feel for it, it’s very satisfying and enjoyable, though the chunky, low-detail visuals may put some off. 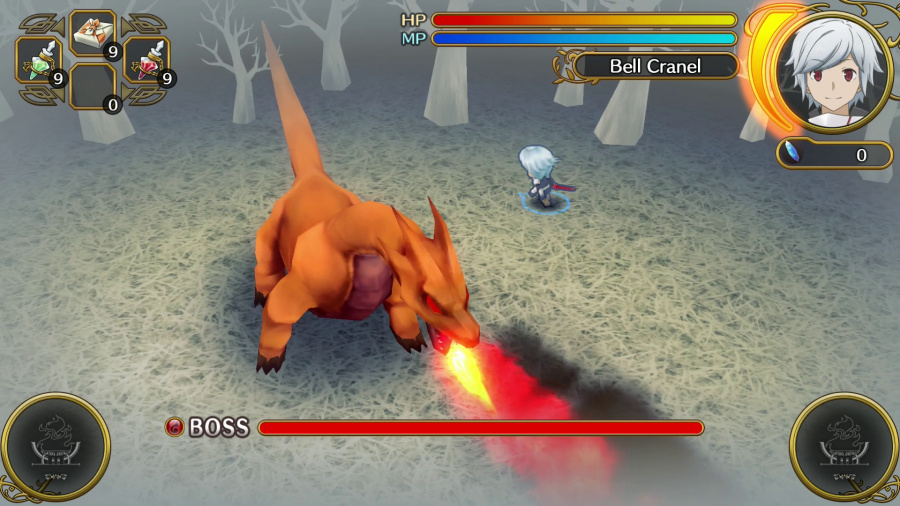 Character progression comes via two main sources. Firstly, there’s the acquisition of skill points through combat, which allows both Bell and Ais to increase their stats, damage output and resistances by flat percentages. Secondly, and more importantly, there’s the equipment system, whereby both Bell and Ais can purchase new equipment and upgrade it up to five times using various items dropped by monsters. Selling specific combinations of monster drop items to the smith also unlocks new weapons for purchase, though this isn’t something you need to worry about until you’ve cleared the 10-15 hour story and are into the “Extra” mode — which is arguably where the “real” game starts.

In Extra mode, you’re presented with three challenging multi-part procedurally generated dungeons that are considerably larger than anything from the main game, plus a series of difficult quests and the opportunity to re-run any of the dungeons and boss fights from the story mode. Your main goal here is to see all the available events with all of the available characters, both by acquiring “Date Points” from running dungeons, and fulfilling specific conditions. Both Bell and Ais have their own cast of eight characters to “date”, each of whom has a substantial series of events with unique mini-stories and special images to enjoy — some of which include fanservice favourites such as hot springs scenes and the euphemistically described “co-sleeping”. 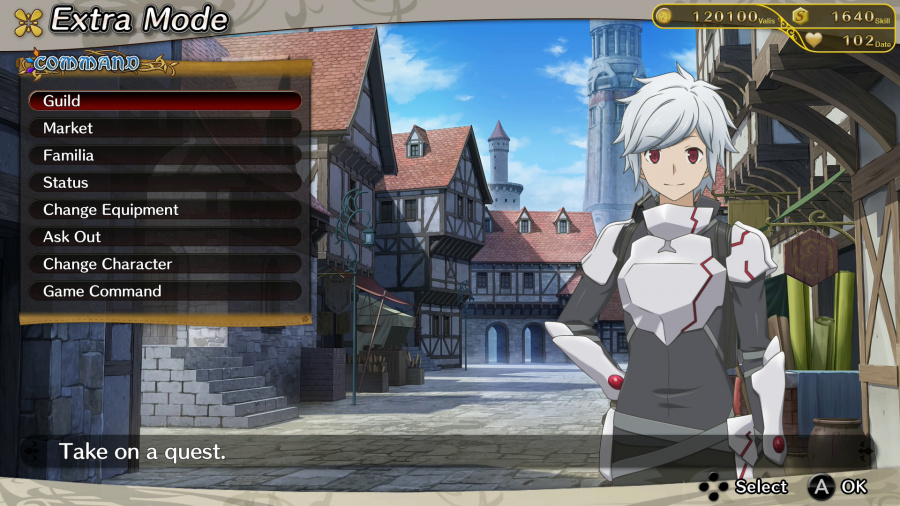 Seeing everything the game has to offer will demand that you engage fully with the progression mechanics for both characters, otherwise the powerful foes in these dungeons and quests will absolutely flatten you. It’s quite a grind to acquire all the necessary materials, date points, money and skill points, but that also makes the Extra mode in particular ideal for handheld play; you can run a quick dungeon when you just feel like a bit of hack-and-slash, or you can engage with the game more deeply and attempt to accomplish a long-term goal.

If you’ve been curious about the property, Is It Wrong to Try to Pick Up Girls in a Dungeon? – Infinite Combate is a good way to get involved, as it allows you to explore the first season of the anime and some supplementary material in an enjoyably interactive manner. Series veterans will also appreciate the opportunity to “date” their favourite characters in the Extra mode as both Bell and Ais, and the array of beautiful artwork and fun events to unlock provides good incentive for continued engagement — as does the progression system, which only really shows its depth once you’ve cleared the story. It’s just a bit of a shame the game feels like it was developed on the cheap; it’s likely some will find the simplistic dungeon graphics in particular somewhat off-putting. If you can look past that, though, this is a good adaptation of a well-loved series, with plenty of content to keep you busy in the long term.


Nintendo Details Switch, Wii U And 3DS Network Maintenance Across August And September