It’s been three years since GoNNER dropped on Switch, a game we thought pretty highly of. Bringing us a challenging 2D platformer with rogue-like mechanics, it told the story of Ikk, our altruistic blob-like hero that set out to help a land-bound whale called Sally. Placing us in a series of procedurally generated levels, no two playthroughs were ever the same. Looking to build upon this winning formula, developer Art In Heart have now released GoNNER2, presenting a slightly more colourful affair than its predecessor with 2-4 player local co-op. It likely won’t appeal to everyone — and the genre isn’t wanting for alternatives on Switch — but this still makes for an enjoyable sequel.

Fans of GoNNER will be pleased to know that GoNNER2 remains just as challenging. That’s made clear from the get-go, when you’re told “Press Jump To Die” instead of the usual “Press A to Start”. Death shall indeed find you, both in the “Game Over” sense and the literal embodiment of the reaper. This time around, Ikk finds himself answering Death’s call, discovering that her lair has conquered by a mysterious presence and it’s up to him to resolve this crisis. There’s little guidance on what to do and no spoken dialogue whatsoever, leaving players to figure out this completely non-linear experience alone. 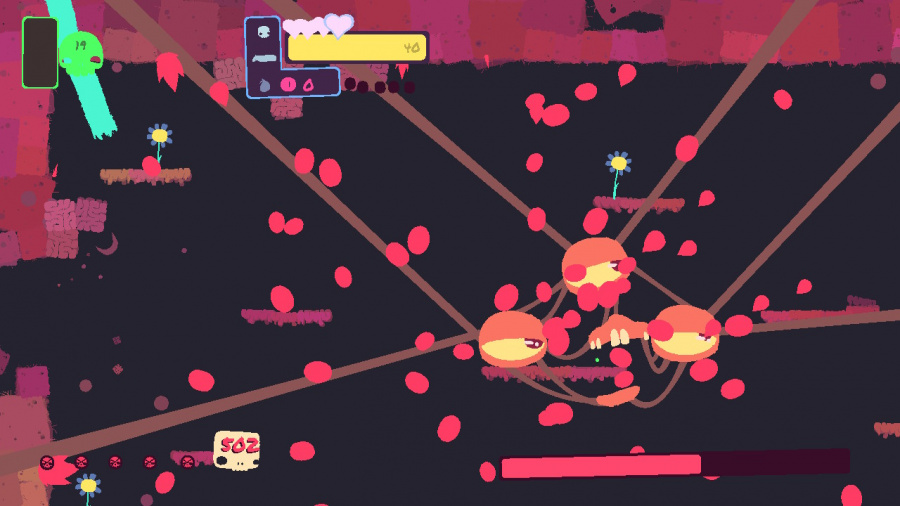 Entering levels requires you to jump into a snake-like creature’s mouth, finding a second one on the opposite side as your exit. You’ll travel across five different worlds here, each coming with different enemies and features. As an example, one land will be filled with enemy snails and flying eye monsters, but another is completely submerged in water, meaning you can swim as opposed to running and jumping. Defeating every enemy isn’t mandatory to advance but in a lot of occasions, you don’t have much choice.

Ikk’s moveset is quite basic, letting you double jump across to platforms or wall jump consecutively to reach new heights. As your standard attack, he can dash into enemies but Ikk can also pick up weapons. GoNNER2 offers various options to suit different playstyles, ranging from quickfire rifles to heavy hitting sluggers. As you unlock more gear, it becomes available to equip from Death’s lair before starting a new playthrough. Though the platforming works well, weapon aiming does feel imprecise at times and it’s all too tempting to just unload the full clip, hoping your shot finally lands. 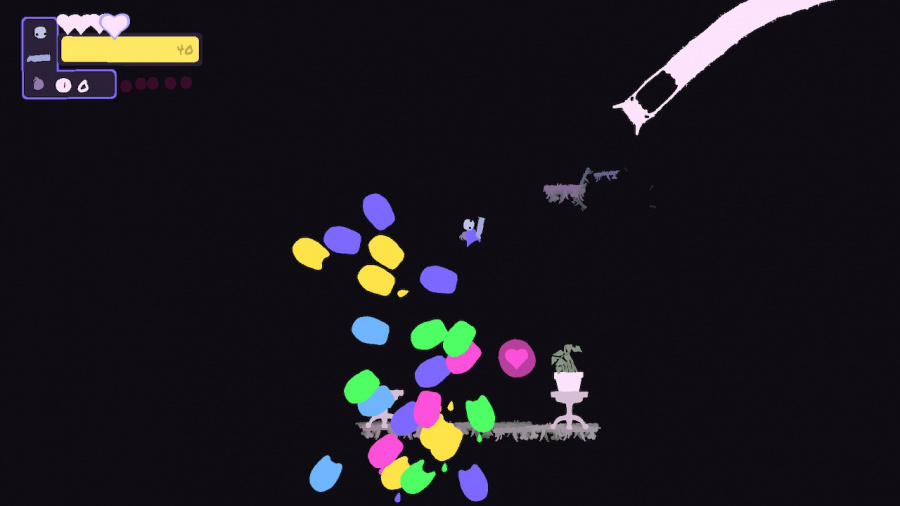 You can equip different heads for Ikk, too. Though a standard skull does little more than give Ikk greater screen presence, additional options can be located like “Block Head” to ensure it remains in place if you take a hit, or “Dashing Head” for a second dash attack. To make your playthroughs more customisable, he can also obtain passive abilities that compliment your weapons, such as “XL mags” for increased ammo capacity or “Bouncy” to let bullets ricochet off walls. Consecutive enemy deaths build up a combo multiplier, increasing your overall score and downed enemies drop ammo/coins once defeated.

It only takes one hit for Ikk to lose a heart though, dropping his equipped gear in the process, so proceeding carefully is the order of the day, as evading attacks can prove tricky. To make matters worse, there’s no cooldown either, so enemies can strike again almost immediately upon respawning if they’re close by — something that can prove mighty frustrating. If you run out of hearts entirely, Ikk is revivable if enough coins are scattered nearby, requiring you to spam the jump button to collect them and fill up a meter. If successful, he comes back but if there aren’t enough, that’s your ticket back to the lair. 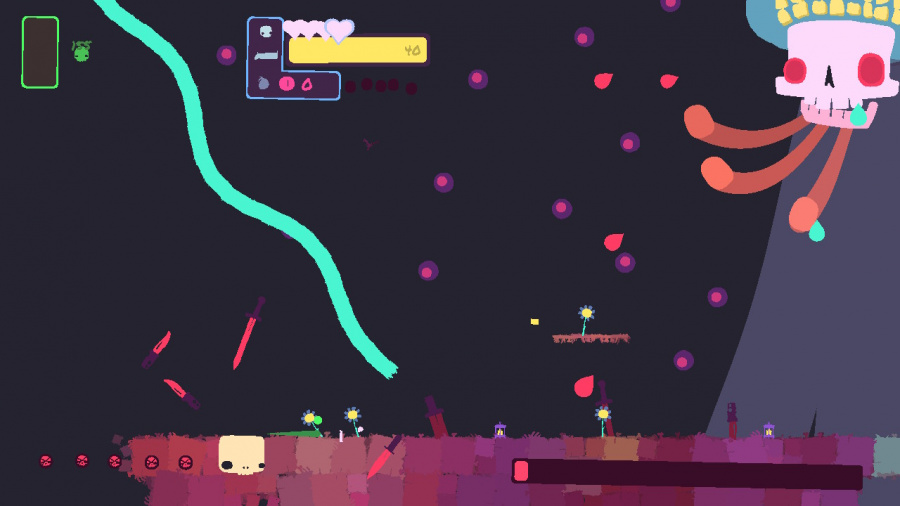 Predictably, most worlds end with a boss fight, though GoNNER2 is kind and offers access to a shop, using those coins to buy upgrades like new heads, various weapons, and more hearts. It gives you a fighting chance at taking down the upcoming fiend, but these battles are intense, with some turning into challenging bullet hell-style fights. There’s an undeniable satisfaction in beating them, knowing that your repeated deaths and playthroughs have paid off. Like GoNNER, it technically doesn’t take long to reach the end, but staying alive is another question.

After defeating bosses, floating eyes emerge from them and follow you between levels, attacking you where they can. Those eyes cannot be defeated, though attacking back can stun them. Once you’ve defeated three bosses, those eyes open the doorway to your final battle and upon completing this fight, you can return to Death’s lair and try again. Everything is complimented by an appealing visual design, one that’s minimalist yet expressive. Amidst the endless black backgrounds is a colourful contrast and it creates a unique atmosphere, backed up a gentle soundtrack.

Ultimately, flaws such as imprecise weapon aiming and that frustrating ability for enemies to attack instantly following a respawn does take the shine off the experience. The rogue-like/lite landscape on Switch eShop also looks very different to how it did back in 2017, and there’s certainly no shortage of spectacular alternatives in the genre. Nevertheless, GoNNER2 remains a likeable sequel for players who enjoyed the first game.

It takes time to figure out just what you’re doing, but anyone looking for a strong challenge will find a lot to love with GoNNER2. It builds upon the original game’s premise well and by offering co-operative campaign play, adds significant replayability with friends. It’s not a flawless game by any means, and players who prefer a more guided experience would do better to look elsewhere but, those caveats aside, GoNNER2 still makes for a compelling experience that comes recommended, if you’re up for the challenge.

Nintendo Announces Huge Cyber Deals Sale For Europe, Up To 75% Off Top Games