Clever Beans Ltd, the team behind 2012’s When Vikings Attack! and, perhaps more notably, the fantastic WipEout Omega Collection of remasters on PlayStation 4, make its first foray onto Switch with Gods Will Fall, and what a successful first foray this is. What we have here is a properly challenging and highly inventive dungeon crawler packed full of unique roguelike elements that lays a tough test before those willing to take up arms and dive into its punishing death chambers. There are a few little niggles here and there along the way with regards to certain randomly-generated elements of combat but, overall, this is an excellent hack and slash action-adventure that’s got us pretty much hooked.

After countless millennia spent toiling under the rule of a bunch of malicious and evermore greedy gods, an ancient Celtic clan decides it’s had quite enough of that, thank you, and packs itself into a fleet of mighty ships to set off and battle its omnipotent overlords. Of course, gods will be gods and, upon seeing these warships approach, they duly send the oceans into a raging tumult, crushing the entire armada and sending all but eight of its warriors to a watery grave. Gods Will Fall opens with these eight survivors as they wash ashore the island of their all-powerful enemies, challenging them to come together and finish the job they’ve started. 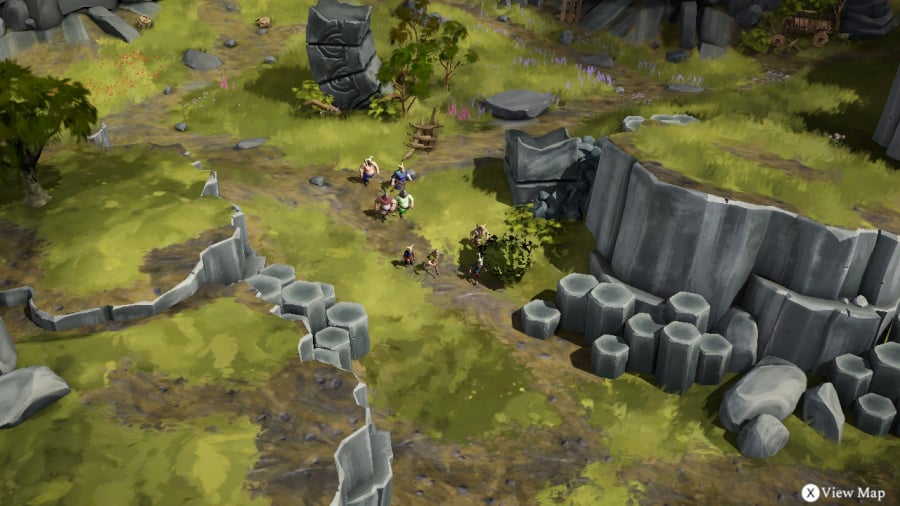 And what a job they’ve got laid before them. Ten gods, ten enemy-infested dungeons and just eight warriors with which to take them all down. Part of the brilliance of the setup here lies in how you’re left to choose not only whom amongst your bewildered band of Celtic warriors to send forth into battle first, but also what order you should set about tearing the island’s deities apart. There’s no right way to approach things; each run sees the strength and abilities of the gods you’ll face vary, and so all you can do is experiment, wander around the island’s lush overworld, chuck a warrior into a dungeon and see how they fare as you try – and usually fail – to get some sort of foothold by slaying your first divine being.

Starting out on a fresh new run in Gods Will Fall, your gladiators are randomly assigned stats that govern the size of their vigour bar, overall strength, speed and any special skills they may have, as well as a weapon in the form of buggered old axes, maces, swords or (if you’re really lucky) spears. You’ll always find yourself starting out with a rag-tag bunch composed of both quick and nimble characters who can easily nip in and out of range of their attackers and slow, cumbersome combatants who are unwieldy to manoeuvre but deliver massive punishment when they connect a blow.

One by one, you’ll send these fighters into the dungeons below the island to face off against the enslaved vassals who make up the defences of each god and, as you defeat them, you’ll chip away at that god’s overall health bar; the more time you spend cutting lumps out of these enemies, the easier it should be to take care of the final boss – should you manage to reach it at all. 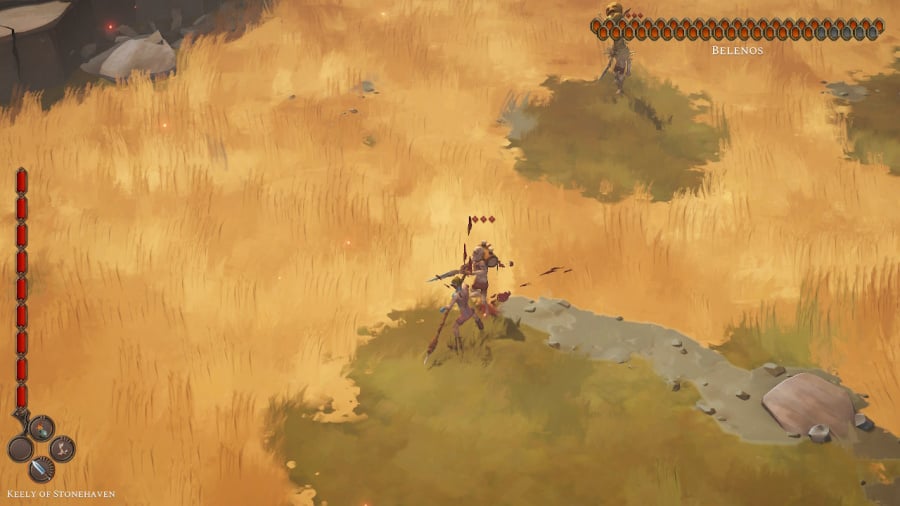 Once in a dungeon, combat has an obvious Soulslike quality to it; naturally cagey, slow-moving and methodical, you’ll need to time your light and heavy attacks well here, as even the simplest of foes is able to hand you your notice in seconds if you’re not on-point with your dodging and parrying. Indeed, mastery of the parry is absolutely crucial in Gods Will Fall. Pressing the A button sees your chosen warrior dodge in the direction you’re currently pushing the left thumbstick and, by dodging directly into an incoming enemy attack at precisely the right moment, you’ll block and momentarily daze your opponent, giving you the space to get stuck in and hack away their health as quickly and viciously as possible.

As you attack you’ll also earn yourself bloodlust which fills up any empty tanks on your health bar; the more hits you manage, the more bloodlust you’ll acquire, and holding in the left trigger when you get a chance will see you let out a roar which transforms that bloodlust into health, refilling your vigour bar and repelling nearby enemies as you empty your lungs in rage.

It’s a clever system that meshes well with the game’s methodical combat style, encouraging you – often against your better judgement – to push forward and to go on the offensive when your health is running low, resulting in some pretty spectacular and hugely satisfying comebacks, especially when combined with the game’s other unique mechanics. 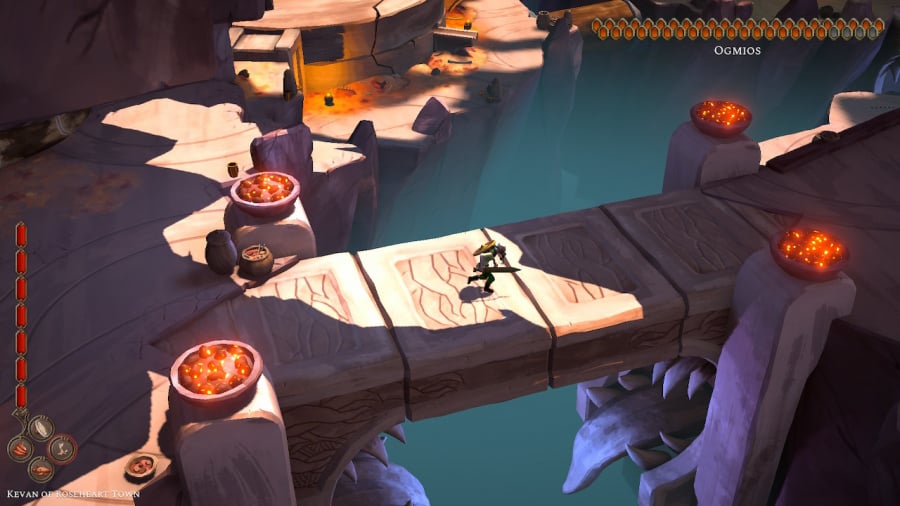 You see, when you send a warrior into a dungeon here and they fall in battle and fail to kill the god that resides within, they are then locked into that dungeon until such a time as you send in another warrior who manages to get the job done successfully. It’s up to you in these desperate scenarios whether to gamble on flinging another of your eight brave warriors into the same dungeon in the hopes of defeating its god and rescuing your fallen fighters, or to move on in an attempt to find an easier foe, defeat them, gain stronger weapons and stat boosts as a reward and then return to mount a rescue attempt at a later point.

Further to all of this – and something that may very well complicate any thoughts you might have of simply leaving a fallen fighter behind – is the fact your warriors also have relationships with one another, as well as with the gods you’ll come up against, that only fully transpire as your run progresses. Some will have had terrible visions and nightmares of Osseus, the great spider god whose hideout is closest to where your adventure starts out, for example, meaning that their overall vigour and strength can end up being compromised due to fear, or perhaps even bolstered through a steely determination to destroy the root of their terrible dreams. 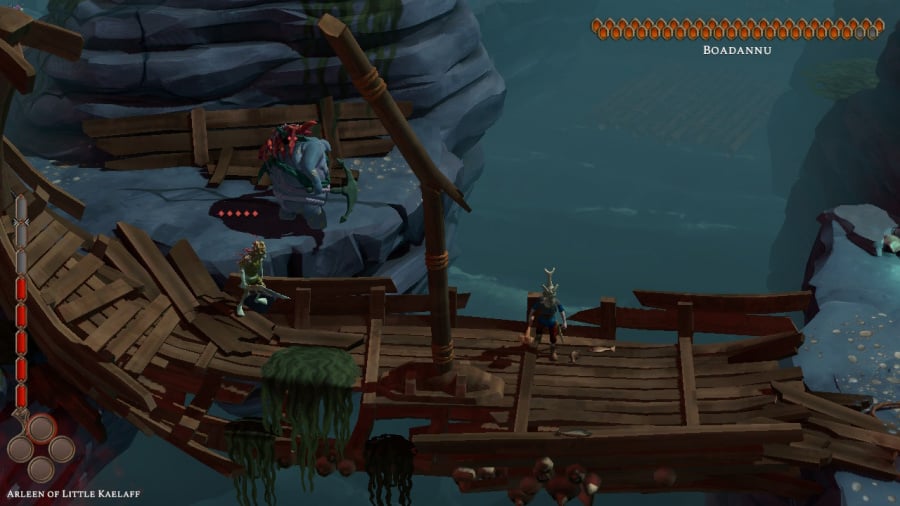 You may find that losing one warrior reveals that another is in fact a family relation, now emboldened and willing to step forth in order to rescue their blood relative. All of these little stories result in random boons and negative effects which further influence who you choose to send into battle next, as well as massively ratcheting up the tension as your band of brothers (and sisters) is mercilessly whittled down by the enemy.

It’s quite surprising just how much these random relationships – combined with this setup where you need to rely on one another to make it through – result in runs that are almost always imbued with a ton of tension, delivering exciting face-offs, desperate escapes, crushing defeats and genuinely elating victories snatched from the jaws of almost certain death. This is all added to immensely by the fact that your little warriors cheer one another on and wave to each other as they step alone into the gates of a dungeon or fall to their knees in grief and dejection as they realise they’ve lost another of their kin – small details doing so much to add real drama to proceedings. 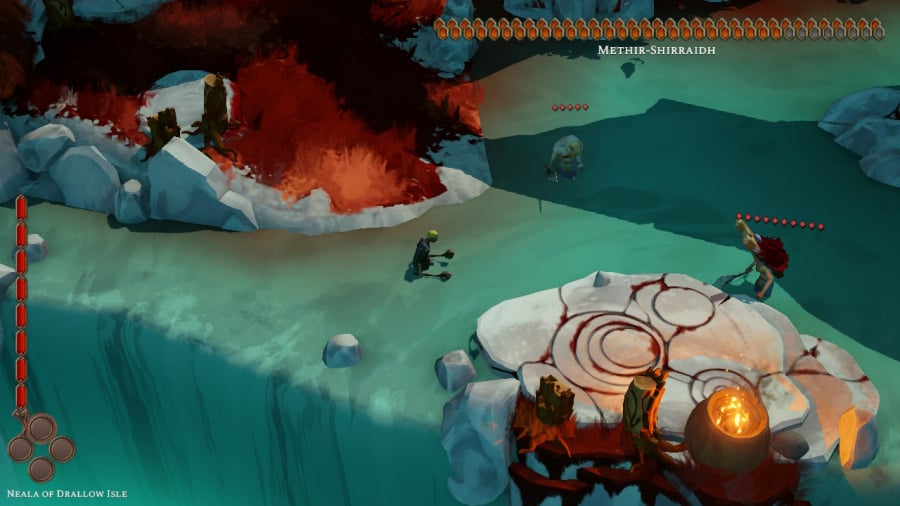 Early doors in Gods Will Fall things can definitely feel frustrating, you’ll likely find yourself repeatedly smashing yourself off a seemingly insurmountable wall as you try to find your feet but stick with it, experiment, set out around the island and try your hand at every dungeon and you’ll soon begin to find your groove. Take out your first god (we recommend starting on Osseus as it seems to work out easiest on most runs), get some weapon upgrades, a few healing items, firebombs, throwing knives and traps as a reward and you’ll soon find yourself three or four dead gods into a mesmerising run before getting tanked and needing to restart. It’s time-consuming, for sure; unrepentantly tough and occasionally absolutely rage-inducing, but it’s such a thrilling, addictive game that we just kept coming back for more.

We did mention a few annoying niggles with the combat and, in this regard, some weapons and warrior types just seem to fare much better than others in a fight. This ends up meaning that, should you roll a mostly slow, heavy crew armed with axes and maces, you’ll likely have a much tougher time of it than you would with quick and nimble warriors armed with spears that do such a great job of keeping enemies at arm’s length.

It’s not a massive problem, and the more you play the better you’ll get at timing those all-important parries and working around the issues inherent with a slow-moving warrior, but it can be a real pain in the early hours, making runs feel quite hopeless as you repeatedly get smashed by rank and file enemies because you couldn’t get out of the way fast enough. Boss battles too, because of the time it takes to mount another assault on them when one of your fighters is downed, can be a little frustrating to get to grips with initially as you attempt to memorise their move-sets and weak points with fifteen to twenty-minute breaks in the action every time you fail. 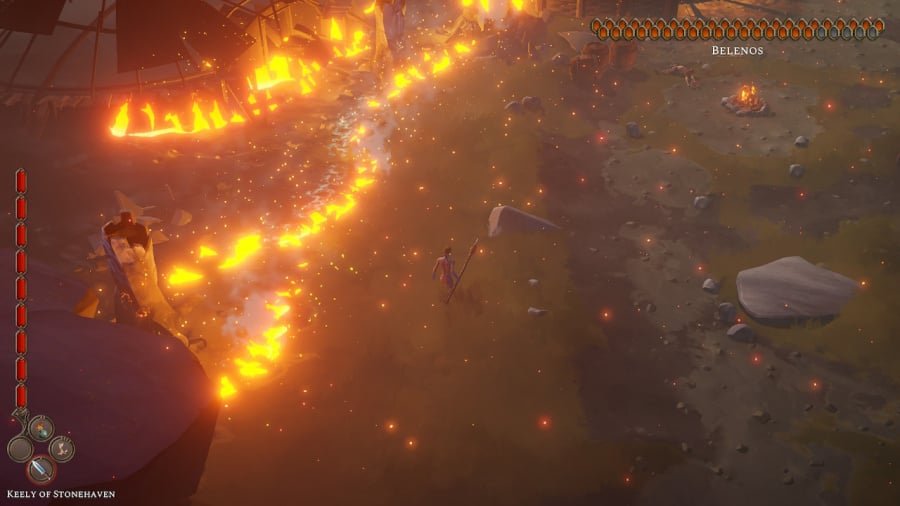 These issues aside, however, what Clever Beans has come up with here is a joy to get to grips with. It’s pretty punishing, stressful and repetitive, yes, but also hugely rewarding and full of tremendous moments where you manage to pull an implausible victory right out of the fire. Gods Will Fall generates so many great little stories of bloody battles won in the face of overwhelming odds, friends and family members rescued from certain death and gods torn asunder by the unlikeliest of heroes. It’s not for everyone, for sure; we can totally see this game being pretty divisive but, if it clicks, if you’re up for pitting yourself against its relentless challenges, you’ll find a unique and highly enjoyable roguelike awaits.

In terms of performance on Switch, in both docked and handheld modes this is a good-looking game with an attractive painterly art-style that runs pretty much flawlessly, give or take the odd minor framerate bump during frenetic boss encounters. The ten dungeons that you fight your way through here are nicely varied in terms of atmosphere, packed full of weird and wonderful enemies, environmental surprises and some well-designed and suitably terrifying gods to face off against. The overworld, too, is a lush and vibrant landscape that’s a joy to manoeuvre your band of warriors around as the game’s camera dynamically swoops in and around for maximum dramatic effect. 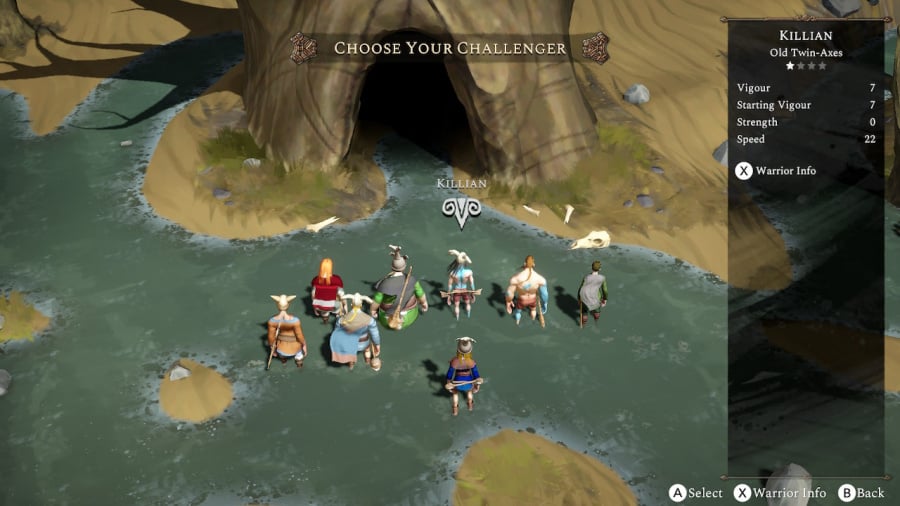 We should also give a shout-out to the soundtrack at this point, a tense and unsettling backdrop to the game’s action that does so much to add even more stress and drama to proceedings, dynamically shifting tone as you skulk around dungeons and face-off against the many monstrosities that stand between you and your all-powerful prey.

The First Review For Bravely Default II Is Now In