There are plenty of card games on the Switch, but Faeria may be the prettiest one of all in terms of sheer presentation. Everything just looks beautiful; the cards themselves are attractive, the UI is slick and very readable, and it all just runs very nice and smoothly, with visual effects enhancing the turn-based action rather than obscuring it.

Well, we say card game, but that’s only part of Faeria. It’s also a board-based strategy game, where you build up the board yourself. Essentially, it’s you versus your hated enemy, the aim of the game being to reduce the opponent’s HP to zero by attacking them directly with your summoned creature cards. Each turn you’re able to spend “Faeria”, the game’s major resource, to put cards into play; often, the aforementioned monsters at your disposal, but also cards which offer boosts to already-active beasties. You’ll also be able to build on the empty hexes of the game’s “board”, with either two generic pieces of terrain or a single special one such as forest or desert. The latter are necessary to activate certain cards; you’ll need five forests to activate a powerful Golem, for example, but it’s worth the five turns that will take. 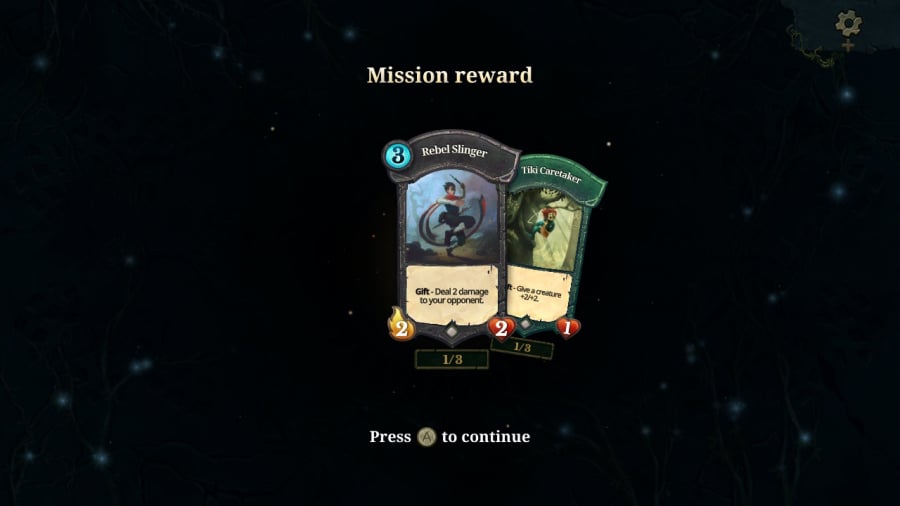 The strategy comes in with the various rules and conditions that can be applied to the cards; your major goal is to get from your side of the board to your enemy’s, but the hostile monsters they summon can stand in your way. Of course, you could always just walk right by them, but some creatures have the “taunt” ability, meaning that if you pass them, you have to stop and fight. There’s not much to the combat – it’s basically just two units slamming into one another and numbers going down – but it’s breezy and satisfying, as well as being simple to understand, the most important thing in a game like this.

Faeria, in fact, does a very good job of teaching you how to play it – something we can’t say of the otherwise rather good Mystic Vale. The initial tutorial missions are well-explained, and as you play on through the Adventure mode, new mechanics are drip-fed slowly, allowing you to familiarise yourself with simpler versions of the game before you’re let loose on the full experience. It’s a nice and non-condescending way to introduce you to the game.

There’s a deck-building element too, with booster packs and individual cards won from individual contests, and piecing your deck together is surprisingly easy, with pre-made decks available to use wholesale or edit to your satisfaction. Less encouraging is the DLC that this inevitably front-loads, with nine packs all advertised for sale even pre-release. Of course, this is the nature of card games, but still, it’s a little bit discouraging and creates a feeling that Faeria in its default form is, well, incomplete. These DLC packs are advertised on the main menu, so their presence isn’t exactly hidden away, either. While there is plenty of content here “out of the box” (so to speak), it would have been cool if the DLC factor could have maybe waited at least a little while. Still, it’s all optional, and it’s not like it’s a problem unique to Faeria. 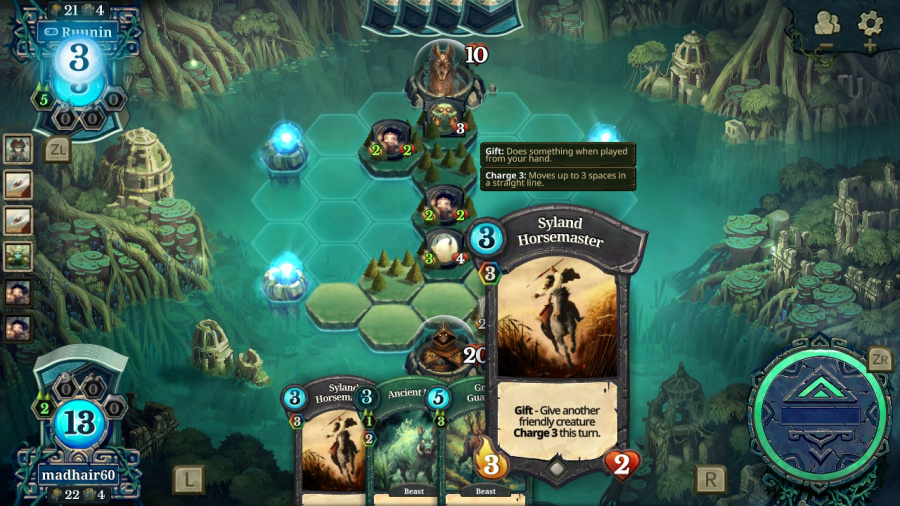 Winning matches or missions levels you up, which eventually allows access to new modes such as Pandora (a random draw challenge mode), Oversky (a co-op campaign) and Puzzles (where you must fulfil conditions with preset builds and game states, such as “win in one turn”). It’s worth repeating that there is an absolute tonne to do here even without purchasing the DLC, and unlike contemporaries such as the sadly-not-on-Switch Hearthstone, it’s feasible you may achieve a complete card collection sometime this century. Really, there’s so much here that it’s actively remarkable; they could have included half of the variations on offer and it would still get a high recommendation from us.

Controls are good and responsive, with a sensible layout for button controls and a slick touchscreen interface. The only issue we experienced was a strange bout of slowdown wherein our commands were accepted, but didn’t execute for several seconds. This bug occurred for the duration of one Adventure mode match, and never appeared again after we reset the software, but it is nonetheless worth noting.

Along with the expected multiplayer modes (ranked and casual battles), Faeria delivers a compulsive, interesting and frankly enormously fun card battle experience. While not the easiest game to explain, it’s an impressive teaching tool for itself, but never feels overwrought or tiresome in said education. Of the card games we’ve enjoyed on Switch, Faeria is easily the highlight of the bunch so far, and it deserves to do well. It’s a full-featured package and stands out as an excellent card/board/strategy experience. If you want to play a fantasy card game on Switch, buy this one first.