Roguelikes and roguelites have a tendency to throw players through their shapeshifting gauntlets of murder and death at a rather frenetic pace. Recent popular examples, such as Hades and Dead Cells, really emphasise this almost uniform focus on speed and it’s one that’s quite understandable in a genre where repetition is such a fundamental part of the core process, with the ability to blaze your way through places you’ve been multiple times almost essential to negating potential player boredom or fatigue.

It’s here however that Crown Trick, NEXT Studio’s brand new roguelite adventure, differs most from the rest of the crowd. It has just as many complex moving parts; weapons, spells, environmental traps, relics, upgrades, trinkets, chests and so on, but the pace of the movement and combat here is often glacial in comparison to how The Beheaded or Zagreus get down to business. Crown Trick eschews fast and fluid hack-and-slash action then, in favour of a slower turn-based style that sees your enemies move or attack only when you do. Take a step here and the various poisonous goblins, killer chickens and mad scientists around you will obligingly follow suit, attack and they’ll take action. It’s a dungeon-crawler that takes a leaf out of Crypt of the Necrodancer‘s book and, for the most part, it results in a satisfyingly tense, tactical and atmospherically good time. 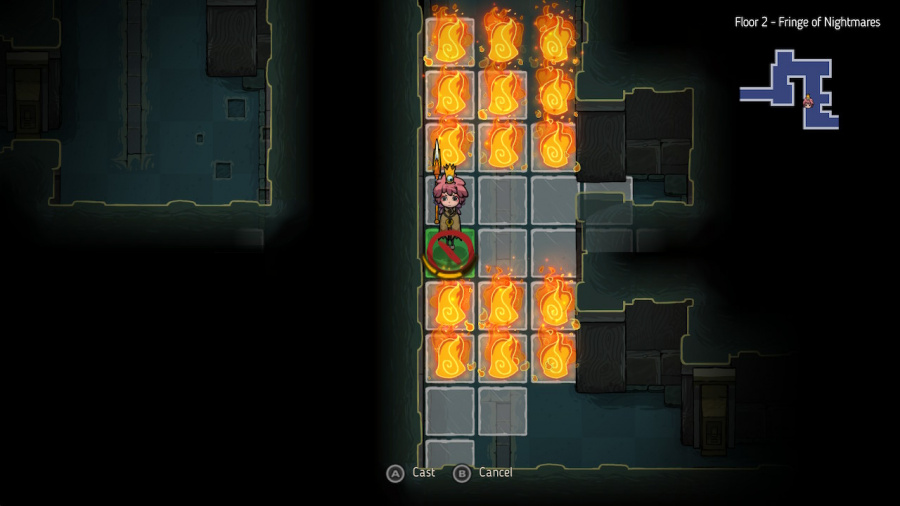 The story here sees players assume the role of Elle, a mysterious young girl who finds herself in the Realm of Nightmares with a rather abrasive, omnipotent Crown for company. Elle, it seems, must assume the role of hero of the world, doing battle with nightmares in a shape-shifting, procedurally generated maze of dungeons that exist in her sleeping mind as she slowly pieces together the true reason behind her being here. It’s a setup that makes just about as much sense as any other example in its genre and, most importantly, wastes no time in showing you the ropes before booting you out into its chaotic killing fields pretty sharpish.

As you begin a run through Crown Trick you’ll be given a choice of two random weapons, each of which has a basic attack power alongside a host of other boons, boosts and magical properties – we began our first run wielding the Axe of the Ancient Tree, a satisfyingly chunky effort that applies root to nearby enemies as you swing it, rendering them unable to move or attack for a set period of time. Once you’ve chosen a weapon you’ll set off on your rhythmic adventure, picking up more and more powerful weapons, items and, most importantly, relics as you go. Relics here take the form of common to legendary flavoured trinkets such as a Philosopher’s Stone that reduces your MP cost when using a skill or spell, Glass Daggers that raise your critical damage or Elemental Cubes that give your attacks a random elemental edge. These are powerful, stackable boons that stick with you for an entire run and, alongside the game’s familiars, are perhaps the most important aspect to having a successful attempt at blitzing through the game’s dream-maze of death. 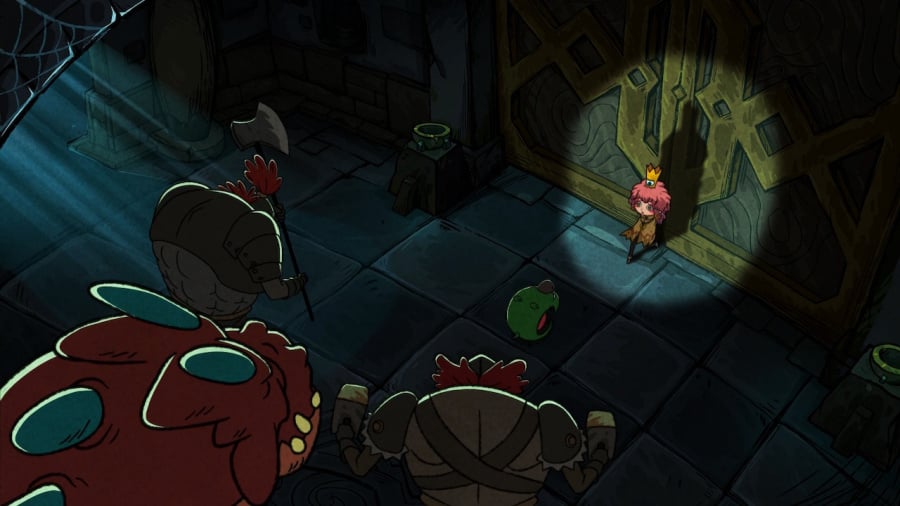 And how about those familiars. As you blitz your way through the Realm of Nightmares you’ll dance the dance of death with a host of bizarre mini-bosses who, once they’ve been bested, become your pals, bestowing upon you the attacks they’d previously used to try to end your life. Familiar powers can be equipped — any two at a time from your current collection — at resting points dotted between dungeon floors and they really are absolute game-changers, giving you tons of options with regards to various area of effect strategies and spells which can be used to corral enemies into specified areas or mess with their timings or ability to make a move directly after you have. So far we’re big fans of the Firebreather familiar, the very first miniboss we encountered, who bestowed upon us the ability to lay down a path of flame three squares long in any direction. We’re also quite fond of the electricity-based Trickster whose zap attacks bounce around between bunches of enemies causing group damage, he also comes with a nifty gravitational field that sucks all nearby dangers into its core before stunning them for a turn.

There is, in short, a ton of moving parts here with regards to offensive skills, boons and boosts and all of this sits on top of the game’s distinctive turn-based, grid system of movement really well. Of course, zipping around on a grid that prohibits diagonal movement as enemies close in can quickly lead to your being surrounded and so Crown Trick provides Elle with a clever Blink manoeuvre which allows her to zip magically away from her current position to reappear anywhere within a specified area – giving her the ability to get behind enemies and escape from tight corners or incoming AoE attacks. It’s another nice little wrinkle in the gameplay that gives you yet more strategic control. It’s also wisely limited in its uses within any one dungeon and can only be topped up during battle by breaking the defences of enemies in order to charge up a Break Gauge that also strengthens your attacks, essentially encouraging an offensively minded playstyle. 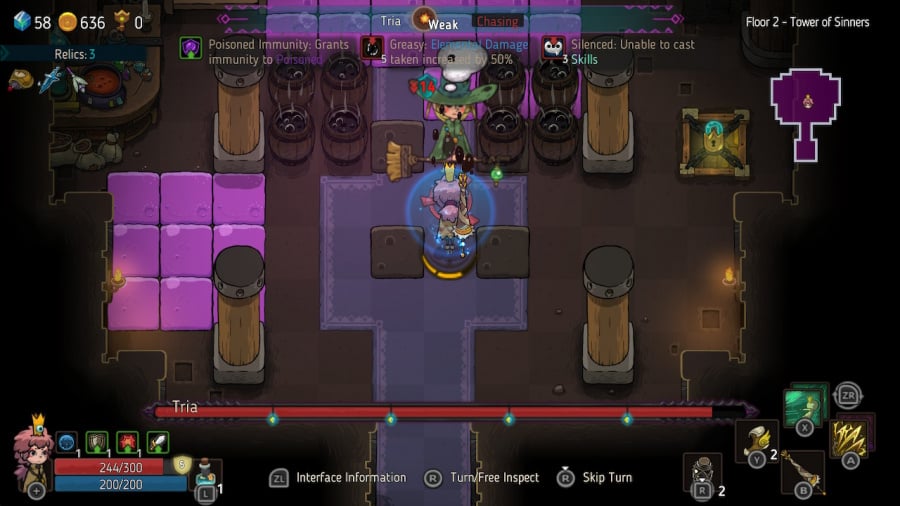 There are so many other aspects to your journey here with weapon gachas and slot machines that suck up your coin in exchange for prizes, a bunch of rather amusing NPCs to rescue who’ll then populate the game’s hub area — enabling you in turn to permanently upgrade your health flask, increase the amount of loot you find on a run and so forth — and Choose your Own Adventure-style moments where you’ll examine some ancient monument or stare into a crystal ball before making an offering that sees you gain HP or strength at the expense of some other aspect of your being. It’s mostly all been done before, it’s true, but Crown Trick does it well enough and with plenty of its own sense of style.

Where this game does get into slight difficulties, however, is through a sometimes clunky UI that can see you need to move away and re-approach items in order to interact with or collect them — something that’s not a huge deal but can become frustrating — combined with battles that can get so busy that it’s really rather hard at times to see exactly what’s going on. Indeed, as hugely satisfying as Crown Trick’s chess-like combat can be when you’ve got space to sit back and think about movements in advance, when things get hectic it can all begin to unravel slightly as you run out of options or struggle to see Elle or the little icons on her enemies that indicate who is ready to move against her next. 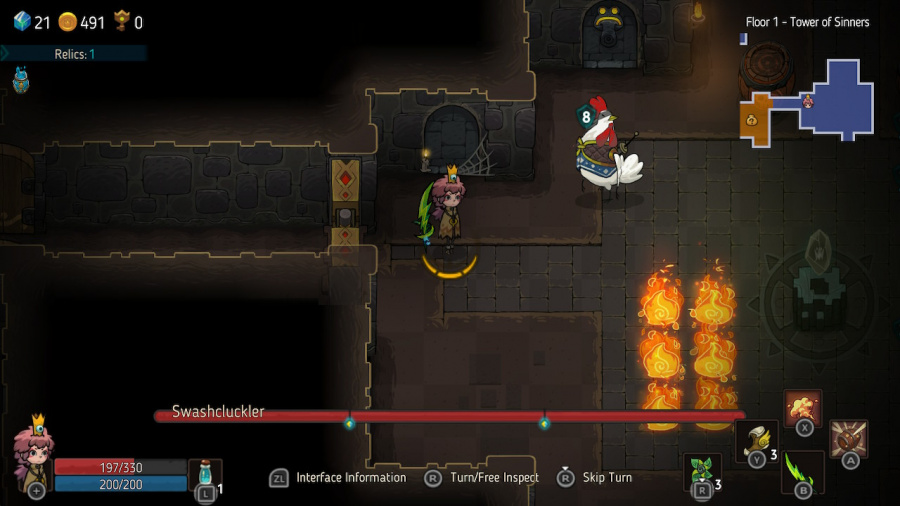 This is also a game, like many of its roguelite brethren, that can sometimes struggle depending on what random weaponry, items or relics you happen to be dealt early doors. We had plenty of runs here where our demise came about entirely as a result of our own mistakes, but we also found ourselves dying quite often because we just didn’t have the right tools to best some big boss or other. It’s a frustration that’s part and parcel of the genre, for sure, but it’s nevertheless one that can make jumping in for another go feel like a bit of a hassle at times. That slow pace too, well, it can make trudging through the same areas and the same bosses a bit of a slog at times. Once you best an area entirely you’ll restart subsequent runs from the next point along the road, which definitely helps matters, but when you’re deep in the mire, struggling to make progress and constantly returning to the same starting location…it can make for slow going.

Overall though, Crown Trick is a stylish, clever and intriguing addition to its genre. The combat here, when it’s not fully devolved into chaos, is satisfyingly strategic stuff with its own unique pace and it all takes place in a wonderfully well-realised world filled with quirky, entertaining characters. Performance-wise too, on Switch things run nice and smoothly in both docked and handheld and look equally as good however you choose to play. For fans of roguelites this is another strong addition to the genre that’s got more than enough about it to warrant a hearty recommendation despite some irritations here and there.

Crown Trick is a stylish and strategic roguelite that slows the usually frenetic pace of its genre down and introduces some rhythmic turn-based battling to proceedings. Elle’s ability to blink around arenas, combined with the plethora of powers she gains from the many weapons, relics and familiars she encounters along the way, also adds plenty of variety and flexibility to the runs you’ll make here. There are some UI niggles that need addressing, the inherently random nature of the core gameplay can plague proceedings now and again and busy battles can become hard to read at times but, overall, this one’s a very solid effort that fans of roguelites should definitely check out.