25
0
by uJRMhoSi3X
In Nintendo Life

Yotsubane’s Crimzon Clover has had quite the journey over the past decade. Beginning as a homemade doujin soft distributed back in 2010, it received an arcade port in Japan in 2013, which was followed by another version for Windows, distributed internationally, a year later. Now, it’s been revived again for the Nintendo Switch in 2020 in what can only be described as a perfect conversion and added modes.

Crimzon Clover – World EXplosion is a bullet hell shooter inspired by the likes of Cave’s Dodonpachi, Mushihime-sama, Esp Ra. De., Ketsui and numerous others (some of these have received recent ports to the Switch, as well). It plays familiarly, with three main ships (a fourth is unlockable) blessed with different speeds and weapon types. However, the most important part of your arsenal is the lock-on attack, similar to Taito’s Raystorm and Raizing’s Terra Diver/Soukyuugurentai. 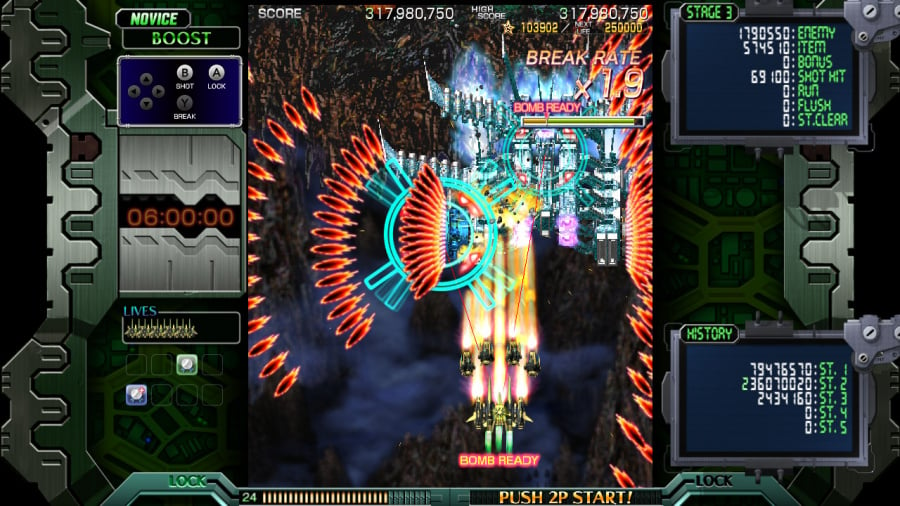 When you hold down the lock-on button, a circular radar will encompass the screen and target all the enemies that it hits; let go and you’ll shoot out a barrage of missiles. There is an upper limit to how many enemies can be targeted, however, so you can’t go hog wild. Not only is this effective in taking down swathes of enemies, but the number of foes that you hit will temporarily increase your score multiplier, racking up higher points.

As you shoot down enemies, you’ll also increase your Break meter, sending you into a super-powerful state once you’ve built it up enough and turning you into an enemy-destroying and score-building wave of destruction. Bombs work a little differently than most other shoot-em-ups in that there’s no numbered stock, but rather, you can sacrifice your Break meter in order to clear the screen and save your bacon if you’re trapped against a wall of bullets. You can also save up this meter and perform a Double Break, enhancing your power to astronomical levels, at least until it runs out. On top of this, there’s also a Break Rate multiplier that increases your points even further. The basic scoring strategy involves keeping your multipliers high and learning the levels well enough to determine the best spots to use your Break attacks for maximum scoring. 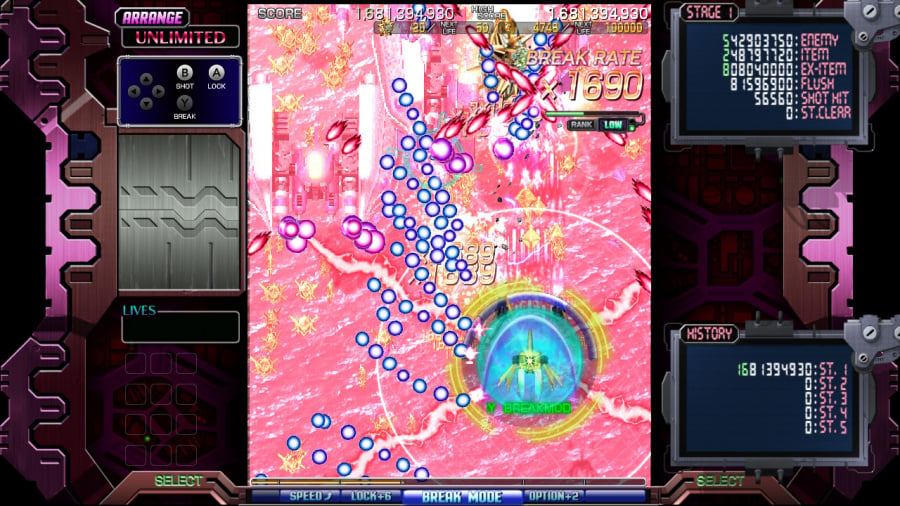 Conceptually, this is par for the course for any bullet hell shooter, but Crimzon Clover feels differently than most primarily because the lock-on attack is so powerful. These types of games can often be overwhelming since they toss so many projectiles at the player’s ship, but the odds feel a little more even when you can unleash screen-clearing destruction with regularity. That being said, it’s still a difficult game, as you need to pay close attention to the brightly-coloured enemy shots amidst all of the explosions and star medals.

Thankfully, the designers are conscious of the fact that shooter fans come in shapes, sizes and skill levels, and have included a Novice mode outside of the standard Arcade mode. This mode drastically decreases the number of bullets, among other factors, so you can concentrate on scoring without being too overwhelmed by enemy fire. Extra lives are gained when obtaining a certain number of stars, plus defeating bosses lets you choose from a variety of bonuses, which includes 1-Ups in Novice mode.

This mode is still not a cakewalk, but it also feels like something that a devoted player can 1CC with some practice. Both main modes also have a Boost variation, which alters difficulty based on player performance and also changes the way the Break attack works, triggering it automatically once the bar is filled. The Unlimited mode, however, kicks the difficulty into an even higher gear and should be reserved for hardcore experts who have learned the game inside-out. 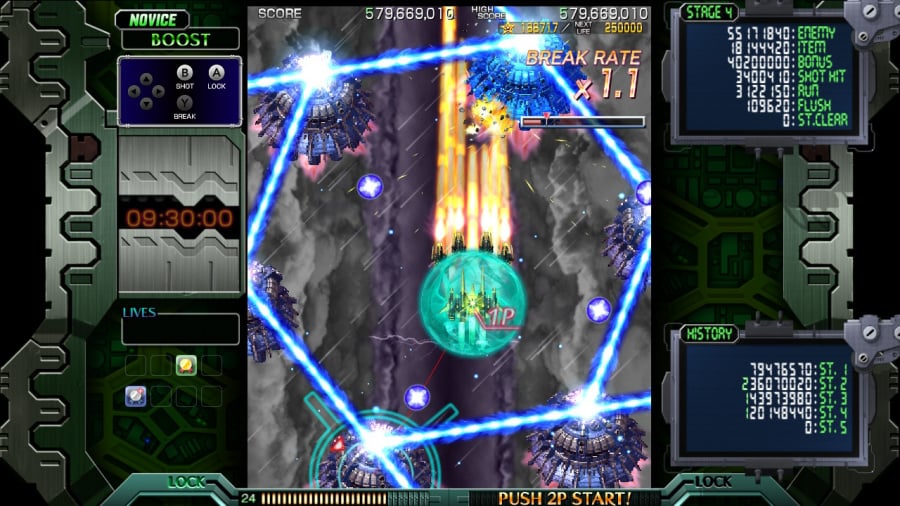 New to this “World EXplosion” release is an Arranged mode. Among the various changes are a Gradius-style power-up that replaces the Break meter. When it reaches certain points of the bar, you can cash them in and receive that power-up, but since there’s only one set of weapons for your ship, these include things like speed-ups, shields, options, and the ability to lock-on to extra targets, as well as activating the Break. The Unlimited variation in this mode is wild too, as it focuses entirely on bullet cancelling, as your shots will nullify enemy bullets. Of course, there’s an enormous deluge of enemy fire to make up for it, so it’s still incredibly difficult to deal with, despite your heightened defences.

The ship design of Crimzon Clover is solid, if unambitious. Other than a slightly brighter colour palette, at first glance, it doesn’t look much different than a Dodonpachi game. Of the five stages, the level types will also be familiar with shoot-em-up vets, taking inspiration for a variety of different games; for example, the third level is filled with bugs and flowers, a la Mushihime-sama.

There’s not much defining personality about it, as it sticks with the usual “laser spaceships” theme of so many other shooters, but at the same time, it’s also devoid of the cutesy girls sometimes used to draw in the otaku audience. Of course, little of this matters because, during the actual game, you’ll be too inundated with explosions to really notice. And while stories certainly aren’t essential for shoot-em-ups, the narrative is really quite barren here; there’s not even an actual ending outside of a score tally. Music-wise, there are two completely different soundtracks, and they’re both pretty good; there’s quite a lot of tracks, with different variations for the Unlimited in the Original versions, as well as unique boss tracks. 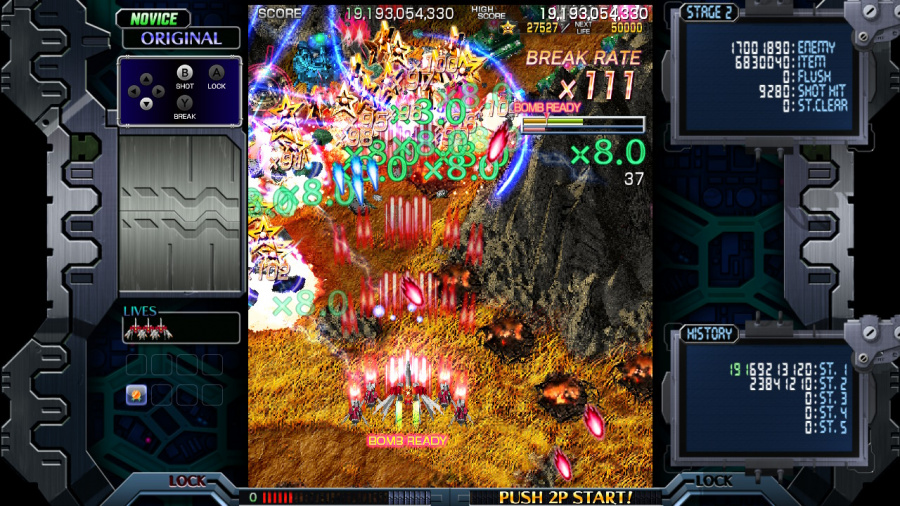 As for the Switch port, it performs exactly the same as the Windows version, with no noticeable input lag. As expected, it supports vertical orientations, so you can use it in portable mode, along with the Flip Grip, for a more arcade accurate experience. There is an online scoreboard (though replays are local-only) and there are bilinear and nearest-neighbour scaling options, though there’s sadly no option for CRT-style scanlines.

While Crimzon Clover does owe a tremendous debt to many arcade shooters through the 1990s and 2000s, it’s clear that Yotsubane has a great love and understanding of them. It’s not only a homage (look at the default high score table for some familiar initials) but also brings some mechanical brilliance that makes it stand out against most of its doujin shoot-em-up peers, and enough to hang with the genre greats. It’s flashy, it’s exciting, it’s addictive, and it’s an essential purchase for genre fans.

Door Kickers Gears Up For A Switch eShop Release This December