As part of the “wholesome games” trend, Calico promises quite a few of the hallmarks of the genre: cats, cafés, gentle music, soft colours, cooking, and befriending fluffy animals. The gameplay is unchallenging, but it’s meant to be that way; your in-game avatar – a magical girl you design yourself with a fairly in-depth character creator – will spend most of her time performing good deeds for the townsfolk that live on the same star-shaped island.

The tasks that you’ll perform over the course of the game are entirely made up of either fetch quests or more general requests. This usually means travelling from one person to another, often on different sides of the map, in order to complete the objective.

Sometimes, the quest involves corralling a bunch of escaped bunnies; sometimes you’ll merely be baking a cake for a couple’s anniversary. These quests are largely standalone, one-off tasks, which reward you with furniture for the café, or money to buy new recipes, hats, and toys for your animal companions. Occasionally, the quests will advance the plot, or open up a new area, where there will be new animals, new characters, and new requests to fulfil. 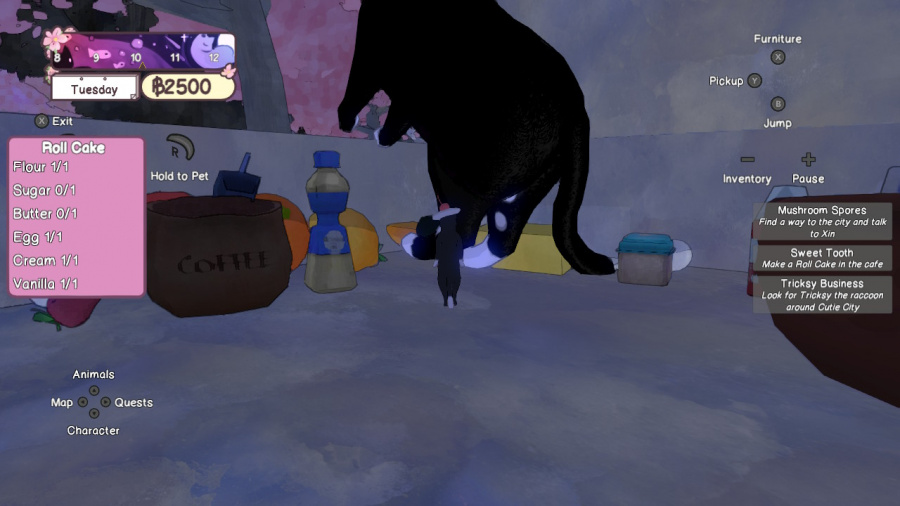 Exploring Calico’s candy-coloured world is a relatively pleasant way to pass the time, if a little slow. The sprint is not particularly fast, and even riding animals is never faster than a light jog – but, again, that’s sort of the point. The latest patch (we’ll talk about those in a moment) adds animal speeds, but rather than increasing their movement speed, it instead gives the option of slow, slower, and slowest.

The world itself is relatively simple, consisting of a few houses in the tiny “town”, a couple more houses and an onsen on top of a mountain, a city that unlocks later in the game, and a potion shop in a gigantic hilltop terrarium. This simplicity, unfortunately, leads to the world feeling quite empty, especially when the interactions between you and the characters almost entirely consist of them asking something of you. Even the city consists of a lot of buildings you can’t go into, and the population is almost entirely a bunch of copy-pasted cats walking on their hind legs.

A few of the people sell potions, which do various things to you and the animals, like changing your hair into a vibrant, fiery pink, making animals huge or tiny, turning birds into griffins, or changing their colours. The potions might be the best part of the game – they’re entirely inconsequential but terribly fun. 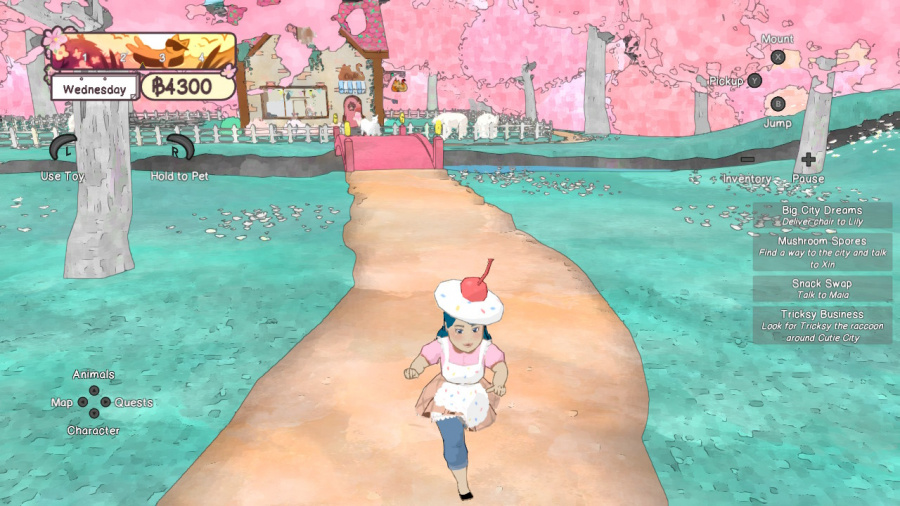 Running the café is very hands-off. You can kidnap whichever animals in the world take your fancy and bring them back to the café, filling the small room and the fenced-in garden with an assortment of polar bears, red pandas, and birds. The main way of interacting with the café is baking, in a minigame which turns you tiny so you can run around on the kitchen counter, throwing huge bags of flour and sugar into a bowl, where it magically turns into bagels, cupcakes, or coffee. People will come by the café and buy these baked goods while you’re out in the world, depositing money into your account automatically. For a game that’s billed as a cat café simulator, it’s disappointing how little time you actually spend there.

When we played Calico on release back in December, we found that the Switch version had too many bugs and glitches to be enjoyable to play. The developers, Peachy Keen Games, have released two big patches for the game since then, but unfortunately, despite these patches, Calico still has a lot of issues. The character gets stuck on the scenery and the animals a lot, and graphical glitches are quite common, even if they aren’t game-breaking. A lot of the in-game text is tiny, making the game quite difficult to play in handheld mode, but even when docked, the menus and dialogue are quite hard to read. The controls and the quests take up a huge area of the screen, making the view feel quite cramped. The dialogue has a fair few typos and grammar mistakes, so it all seems rushed and messy. Characters will talk about places that they aren’t currently in, and people that are standing right next to them, which is a bit awkward. 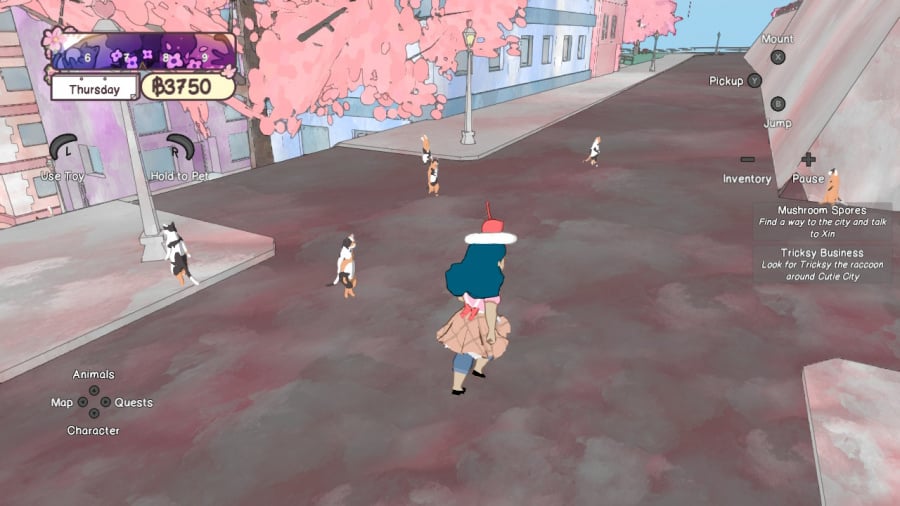 And besides all that, the game consists almost entirely of running (slowly) across the map to fulfil a quest, which triggers a new quest back where you started. Some of the places are so far away that you’ll find yourself literally jumping off cliffs to get there faster. The characters are quite one-dimensional and have nothing much to say to you besides their requests for new baked goods in the café, or errands for you to run. Some of them run shops, and you can buy new furniture, clothing, recipes, or cat toys from them, but it’s so hard to remember who sells what that you’ll often find yourself talking to everyone in town before finding the one place that sells bread recipes, which you need for a quest.

A few of the quests are so vaguely worded that they’re a nightmare to solve – like the one that tasks you with “finding a way into the city”, which apparently means talking to a hard hat-wearing cat down a side road, then talking to a bunch of different people across the map to get “Owl Club” back together. A lot of it just doesn’t make sense, and not in a fun “solve the puzzle” way.

There’s still a lot to like about Calico, and some of that is directly because of the janky stuff. Animals ping-pong around the place, spawning in mid-air only to fall down like ragdolls. The baking minigame is occasionally interrupted by a giant cat or bird climbing on the counters, kicking the eggs around while you try desperately to regain control. Holding a cat and “wiggling” it dislocates the player avatar’s shoulders, so you can hold the cat at angles that shouldn’t be possible. One of the potions that you can buy makes an animal “float”, which makes it follow you around the map, contorting and twisting into awful shapes and getting stuck on trees. It’s quite something. 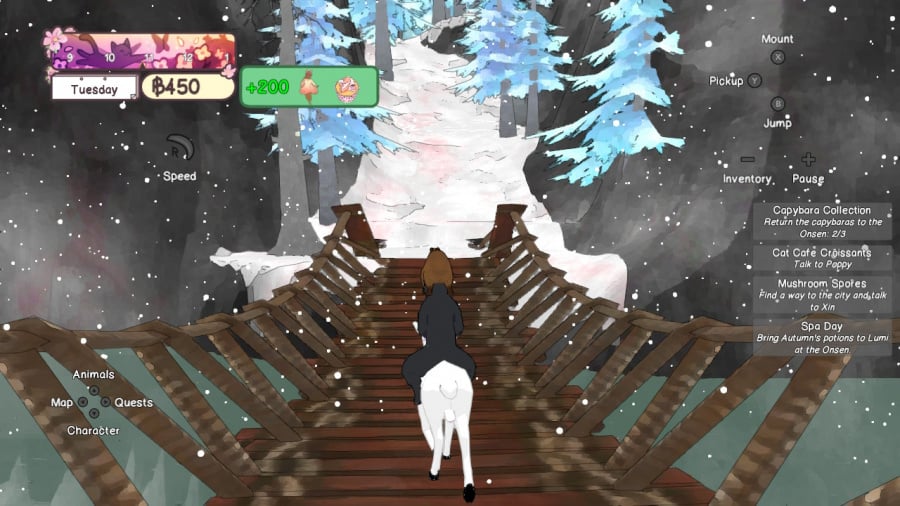 Glitches aside, there’s a lot of heart in this game, too. The music – a soft, if repetitive, melody – is relaxing and sweet, and matches the candylike pastel watercolours of the world. There’s a definite style to the dialogue, too, that prizes friendship, warmth, and goofiness. The cast of characters draws widely from the LGBTQ+ umbrella, and there’s a fairly broad representation of different body types, even if it does skew quite heavily towards plus-size bodies. Clearly, the developers care deeply about their audience feeling welcome, safe, and loved.

Calico’s world might be an unchallenging, pastel-coloured paradise where everyone is always pleasant and the animals sometimes turn into eldritch errors, but it’s a welcome respite from games that take themselves more seriously, if that’s what you’re looking for. It’s hard to wholeheartedly recommend a game with such a wide array of glitches, but we haven’t had this much fun with unexpected bugs in a while.

Japan’s 35 Best-Selling Switch Games In The First Four Years, According To Famitsu

Video: Check Out This Side-By-Side Comparison Of Crash Bandicoot 4 On Switch And PS4 Pro

People Are Sharing Their First Four Zelda Screenshots On Switch, And We Wanted To Join In – Feature